The McCain campaign, in running TV ads which defy prior political standards, is gambling that the traditional rules governing what is permissible in presidential contests -- as defined by the mainstream media -- can safely be discarded this year.

The normally cautious and even-handed Associated Press on Thursday declared, "Even in a political culture accustomed to truth-stretching, McCain's skirting of facts has stood out this week." The controversies have surrounded McCain television commercials and stump speeches asserting that Barack Obama "supports" comprehensive sex education in kindergarten, that Obama called Sarah Palin a "pig in lipstick," and that Palin stood firmly against the "bridge to nowhere" -- despite videotape evidence that the Alaskan governor provided support for the earmark before she opposed it.

So far, based on polling over the past two weeks, McCain's roll of the dice has paid off. Not only has McCain made substantial gains, pulling modestly ahead in most national polls, but his assaults on Obama appear to have damaged the Democratic Party as well, raising Republican hopes of minimizing House and Senate losses.

There are 50 days left until November 4, and the outcome remains unpredictable. The public could become hostile to McCain's negativity; the Obama campaign could find a way to reverse current trends; or McCain's candidacy could simply fail to thrive, as happens to all losing presidential nominees.

If, however, the current Republican strong-arm approach to this year's contest proves effective, not only will Democratic expectations be crushed, but the triumph of image over substance, of playing to bias, and of coded rhetoric will mark a significant advance of the dominance in politics of advertising "ethics."

University of North Carolina political scientist James Stimson, an expert on public opinion, said that when he seeks to determine the strength of a trend, he looks "for uniformity across multiple surveys as a sign of meaningful movement and I see meaningful movement (toward McCain)."

The McCain strategy is based on a series of major premises. These include, first, that what many thought was the fading salience of wedge issues -- evoking stereotypes of liberals as 'weak on terror' and 'sexually permissive' - can be revived; second, that Obama is particularly vulnerable to these stereotypes, in part because he is African American; third, that standards of accuracy and truthfulness in political competition have eroded; and fourth, that the traditional authority of the national media as arbiter of what is legitimate in political discourse has disappeared. Preliminary evidence suggests the McCain wager to abandon restraint is paying off. The Gallup/USA Today survey released September 12 found an abrupt decline in the Democratic advantage that many expected to define this election. When respondents were asked whether they would vote for a Democratic or Republican congressional candidate, the sustained Democratic pre-convention advantage of 11 to 15 points dropped to just 3 points. 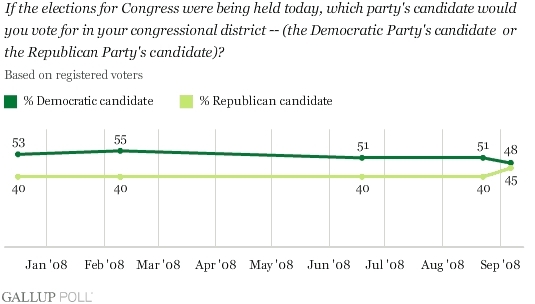 Throughout the Republican convention, primetime speakers showed no hesitancy in seeking to revive liberal Democratic stereotypes -- no matter how outdated or inaccurate such caricatures have been found to be:

If Romney took a shot at Obama and the Democrats, Palin fired a cannon:

[Obama] is a man who can give an entire speech about the wars America is fighting, and never use the word 'victory' except when he's talking about his own campaign.... Victory in Iraq is finally in sight; he wants to forfeit. Terrorist states are seeking nuclear weapons without delay; he wants to meet them without preconditions. Al Qaeda terrorists still plot to inflict catastrophic harm on America; he's worried that someone won't read them their rights.

Damage inflicted on Democrats on national security issues is readily visible. Through much of 2005-7, when the Iraq War was a palpable disaster, the Republican advantage of military and security issues disappeared. More recently, however, that advantage has reappeared, posing a threat to Democrats. A September 5
survey
performed by the Democratic firm Greenberg, Quinlan and Rosner for the progressive organization Third Way found: "Old doubts about Democrats on security, after diminishing during 2006-2007, have begun to re-emerge: concerns that Democrats follow the polls rather than principle; that Democrats are indecisive and are afraid to use force; and that Democrats don't support the military.

The study reported that when voters were asked, "Do you think the Democrats or the Republicans would do a better job of ensuring a strong military?" they chose Republicans by a 57-27 margin. When asked "Which party do you associate more with the term 'Too hesitant to use force'," likely voters chose the Democrats by a 59-21 margin.

It was these vulnerabilities that Rudy Giuliani pounded on in his September 3 convention speech, a tactically conceived offensive reflecting Republican understanding of their potential strength on this terrain:

Of great concern to me, during those same four days in Denver, they rarely mentioned the attacks of September 11, 2001. They are in a state of denial about the biggest threat that faces this country. And if you deny it and you don't deal with it, you can't face it....

While many Democrats dismissed the Republican convention as a collection of failed sword rattlers, the data to date suggests that the rhetoric of St Paul-Minneapolis should be taken seriously.

A September 13 Democracy Corps poll found that while Obama and the Democrats were viewed as having held a successful convention in Denver, those gains were wiped out by the success of the Republican convention in St. Paul:

The latest (pro-McCain) shifts have been driven in part by the Republicans' effectiveness in painting Obama as too liberal, too inexperienced and a weak leader who favors giving up in Iraq. Obama addressed all these doubts effectively in Denver but St. Paul erased the gains and more: there was a 6-point increase in numbers seeing Obama as 'too liberal' (from 49 to 54 percent), and an 8-point increase on 'too willing to reduce troops in Iraq' (from 57 to 65 percent). After Denver Obama moved even with McCain on strong leader, but McCain took a 12-point lead following St. Paul. And even though Obama's work in Denver had narrowed McCain's margin on national security, McCain came out of his convention with a 25-point lead on this issue.

In addition, the Democracy Corps survey found substantial erosion in Obama's advantage as an effective agent of change:

McCain has contested the mantle of change and defined it in his own terms that are believable to some voters....In the absence of a coherent change message from Obama, many voters are accepting McCain's definition, particularly since they want to change Washington and clean up government. As a result, Obama has lost his double-digit advantage over McCain on the right kind of change. He now holds only a 7-point lead nationally and 6-point advantage in the battleground states on what was a key driver of his vote. Obama has also lost his double-digit advantage on standing up to special interests in Washington and is now tied to McCain on this measure of government reform.

UNC's Stimson said that "'Democrat' is a heuristic for liberal and race probably adds a little bit," but, he argues, Obama's difficulties lie less with his race than with a perception among some voters that he is elitist:

There is the sense that he has visited working class America, but he has never lived there, and he just doesn't know what the world looks like to people who get dirty on the job....Middle class intellectuals, even with the best possible motivations, don't know that world, don't know how to reach out to people they actually want to help.

The McCain ticket is by no means, however, in the clear. Palin may, herself, become the victim of stereotyping. Geoff Layman, professor of government and politics at the University of Maryland, pointed out, however, that "voters make inferences about candidates' issue positions based on their demographic traits. The most powerful of those appear to be race and gender, with voters viewing African-American and female candidates as more liberal than white male candidates.... Not surprisingly, that tendency is strongest on the issues most closely associated with African-Americans (civil rights issues, affirmative action) and women ('women's issues' like abortion and gender equality)."

University of Chicago political scientist Michael Dawson noted that Obama has tried to counter excessively liberal perceptions of him by doing "some mild versions of the Sister Souljah route (or more the Bill Cosby route). I wouldn't be at all surprised to see a more stringent version, if the current poll stats stay firm. My guess they want to avoid it, since mentioning race at all has potential negative consequences, but they will do so if he continues to stay even or fall behind."

The Obama strategy so far has been to challenge the accuracy of what the McCain campaign is putting on television and saying on the stump with the presumption that the media will rise up in revolt over McCain's false assertions.

To a considerable extent, the media insurgency has materialized. There have been tough, highly critical stories about McCain's claims in the New York Times ("McCain Barbs Stirring Outcry as Distortions"), the Washington Post ("McCain Wraps Distortions Around One Truth"), the Los Angeles Times ("New election low: distorting the fact-checking -- News outlets and independent truth squads seem to agree that the McCain camp's distortions on Barack Obama have gone too far") and many others.

The McCain campaign, however, is banking on the notion that the steady decline in trust in the media has reached the point of no return, that the press and television can no longer play the role of umpire or national arbiter of what is accurate and what is untrue, what is fair game and what is out of bounds.

The McCain campaign is making no secret of its changed stance. "We recognize it's not going to be 2000 again," McCain spokesman Brian Rogers told Politico, referring to the campaign eight years ago when McCain was revered by the media for his transparency and accessibility.

"He lost then," Rogers said. "[Now] We're running a campaign to win. And we're not too concerned about what the media filter tries to say about it."