Passed in 1987, McKenny-Vento was intended to address the emergency needs of homeless people while the federal government worked to restore the funding which had been cut from HUD's affordable housing programs.

But it didn't work that way. McKinney-Vento has spawned an endless array of continuum-of-care plans, 5-year plans, 10-year plans -- an endless system of writing, planning, and researching which "best practices" should be used to end homelessness. At the same time, the federal government has continued to defund, dismantle, and sell-off affordable housing units, thus ensuring that more and more people become homeless. 360,000 Section 8 and 210,000 Public Housing units lost since 1995.

It is a shameful trade that robs Peter to pay Paul.

McKinney-Vento homeless assistance programs have increasingly become a catch-all system for people who were once permanently housed by mainstream federal programs such as HUD and USDA. Yet even as affordable housing has been decimated (over 800,000 units lost in 25 years), eligibility criteria for McKinney-Vento homeless assistance have been tightened.

And to add insult to injury, we are seeing a massive PR campaign by federal agencies such as HUD and the Interagency Council on Homelessness to convince everyone -- or perhaps to convince themselves -- that with just the right coordination, facilitation, and cooperation, they will actually end homelessness. This is self-deception. Anyone who has done the math would know. The ongoing new guidelines, new initiatives, and newly named target populations suggest that people overseeing this system clearly know it is not working.

To provide a context: in the 25 years since McKinney-Vento passed in July 1987, two major events severely impacted the numbers of poor people finding themselves homeless.

The first was the 1998 Contract with America during the Clinton Administration when the Housing Act of 1937 was changed from "remedy...acute shortage of decent, safe and sanitary dwellings" to declaring that "the federal government cannot ... provide housing of every American, or even the majority of its citizens."

The second was in 2009, the last time McKinney-Vento was reauthorized in Congress. Renamed the HEARTH Act, it instructed HUD to create a new bureaucratic definition of who is homeless. By implicitly admitting defeat that the McKinney-Vento model has any chance of stopping the growing wave of homeless people, the HEARTH act instead redefined "homelessness" out of existence for thousands of families and people without homes. A 105-page HUD memorandum describes who is homeless and establishes welfare-oriented criteria that determine who will qualify. It is particularly hard on families who live doubled up, tripled up, or in SROs. 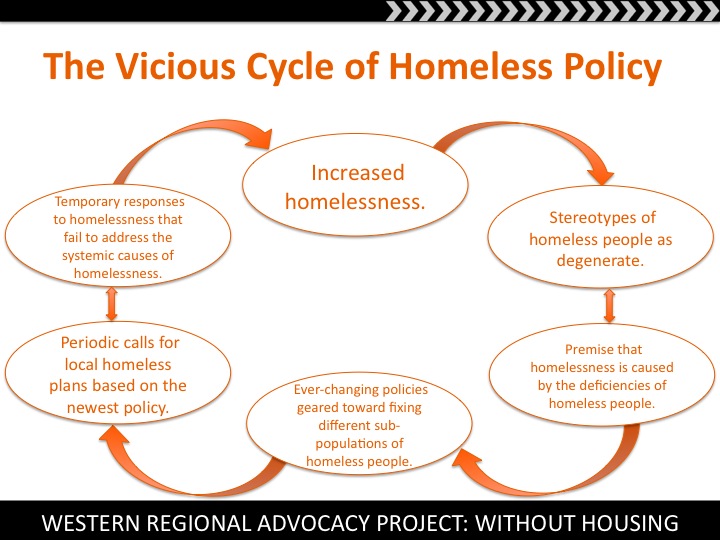 Advocacy organizations -- be they local, statewide or national -- that continue to focus on McKinney-Vento will never be catalysts of the change we need. Their funding is too contingent upon being seen as legitimate by whatever administration is in power, a dependence that moves those in power even further away from the actual lives and experiences of poor and homeless people.

Consulting and research firms have probably benefited the most from McKinney-Vento funding because HUD bureaucrats like justifying their proposals by paying researchers. We need no further consulting or research to understand the direct and obvious correlation between massive affordable housing cuts since 1978, the opening of emergency shelters in the early '80s, and the continued and growing existence of homelessness today.

In 2006 and updated in 2010, WRAP issued a carefully researched analysis on the systemic causes of homelessness called Without Housing. Other studies and research done on homelessness must have been able to gather the same information. Had they looked closely at the underlying cause-and-effect issues connected with massive numbers of people without housing, they should have been able to connect the dots. But they seem not to have looked. It's not a difficult correlation, but the dots have been left unconnected.

We need to be honest: too many organizations and departments, in and out of government, turn away from the simple connection between the absence of affordable housing (cause) and the increasing numbers of homeless people (effect). No amount of coordination or redefinition is going to end homelessness. McKinney-Vento was created to address the effects of homelessness and it is time for HUD and USDA to step up and address the cause of homelessness. 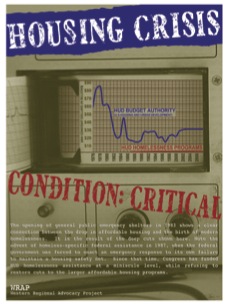 If the past 25 years have taught us anything at all, it is that nothing ends homelessness like a home.

Images in post created by and courtesy of WRAP.