After imposing a "full embargo" on food imports from the West, Russia has made it clear that the latest sanctions are politically motivated.

And who's sorry now? Rather than hurting American, Canadian and European businesses, the irony of the newly implemented sanctions lies in the potential effects on the citizens of Vladimir Putin's Russian Federation. Burned by higher prices on imported goods, Russians are likely to lose easy and relatively affordable access to certain items that have long stopped being viewed as Western luxuries. 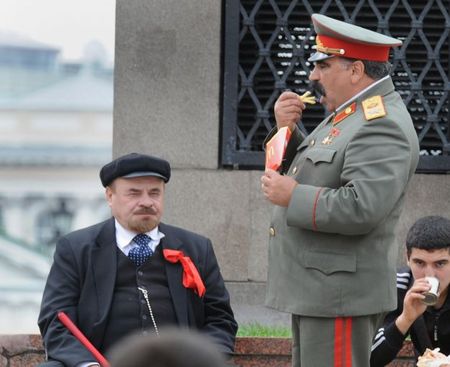 There was a time, long before the fall of the communist regime, when my father, a respected architect by day and an avid Jazz collector by night, made headlines in pro-Soviet newspaper Pravda as a "certain Givi, Soviet architect, who sold his car, the latest model of Volga, in order to buy American loudspeakers made by Bang & Olufsen imported illegally from capitalist USA." The article concluded on a harsh note, "Beware, comrades, of this man and anyone else who is betraying our socialist morals by turning to the ever-corrupting capitalism."

Growing up in the post-Soviet climate, these stories were unfathomable to me. As the Russian Federation (and the former USSR) had lifted the Iron Curtain and was actively strengthening its ties with the West, those living outside of Moscow and St. Petersburg envied our quality of life.

With a visible improvement in the economy came our very first McDonald's -- needless to say, my joy was boundless! My dad and I would sit at one of the outdoor tables in Moscow's Pushkin Square, enjoying American double-cheeseburgers and sharing a large box of french fries. "We never thought this day would come," he would tell me. "Eating American food in Russia without having to hide in somebody's cramped kitchen?!"

He'd go on sharing stories about his endless struggles to get hold of American music that was just as difficult (if not more so) as finding U.S.-imported produce.

We had no choice but to hunt for second-hand vinyl records through the shadiest of characters across the country. The album would change hands hundreds of times until we finally gathered at my place and made countless cassette copies... Looking back on it now, of course the times were tough and dangerous, but you know something? Underneath it all, life had a certain charm to it, too.

I would listen to him in disbelief, fully engrossed in his storytelling and my delectable chocolate milkshake. None of it made sense to my generation. Here, in modern times, we practically took it all for granted.

Years later, reading the latest headlines from the other side of the Atlantic, I can't help but wonder if we have been transported back in time -- back to the USSR. Sure, there won't be a USSR 2.0 as we knew it, nor is there a real possibility of Cold War II as some had predicted earlier, but will the new Iron Curtain be descending farther to the east than its predecessor, separating "us" from "them" and dividing "ours" from "theirs" much like in the olden days? My compatriot, Joseph Stalin, and Comrade Lenin would have wanted nothing more.