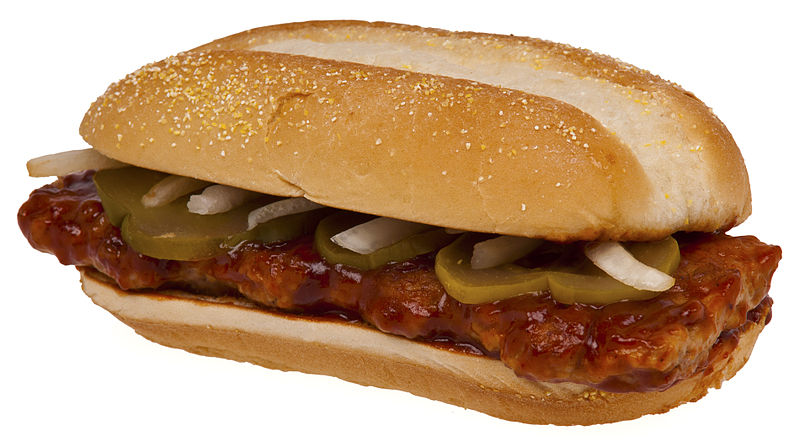 I'm no stranger to failure. Blown opportunities, failed internships, being fired from a terrible day job -- I've experienced them all. But instead of drowning my sorrows in drugs and alcohol (like with everything else) I use something different. I use the McRib, both to fill the void as well as act as a sign of things to come.

Every time something bad happens to me, I seek solace in the McRib. Job interview didn't go well? A McRib. Girlfriend dump you? Two McRibs. Just got hit by a car? I'm not walking anywhere, make it three.

After a while I noticed a pattern. Bad things were only happening when the McRib came around. Whenever some terrible fate would befall me, my local McDonalds just happened to be raising a familiar banner in their window, maroon-colored as to invoke the color of a sauce that turns the edible, gray foam into a sponge to sop up all my troubles and cares. When I see the McRib's returned, I break out into a cold sweat. Not just because of the coming dosage of sodium, but for whatever misfortune will end with me comatose under a pile of little, red, sauce-stained boxes.

Make no mistake, the McRib is delicious, but not at any given time of day. Not even in a 2:00 a.m.-and-you're-wasted kind of way... but in a way that only tastes good when you've got that extra saliva in your mouth from having just wept; that only tastes good because you've been fired and this was the last of your petty cash. The McRib can only be enjoyed at a low point, and the farther down you go, the sweeter that sauce becomes.

That little patty of restructured meat product (a process that glues together bits of unused pork) can be formed into any shape you want. I wish it'd be molded into my own personalized shape, something to add to my catharsis; like the shape of a smartphone with the words "we need to talk" written on-screen. The pain, much like the edible foam of the McRib, can smothered in a sea of barbecue sauce and forgotten under a pile of pickles and onions.

The McRib itself is complex; it's 70 ingredients include a bleaching agent used in foam plastics, such as cushions used for gymnastics. In the words of Lunch Lady Doris, there's very little meat in these gym mats.

It was this bastard son of the mcnugget family, with its 500 calories and nearly 1000 grams of sodium that was both the harbinger of and solution to all of my problems. It's effects of immobility, complacency and a calm but steady urge to do nothing is what makes it so powerful. That's what drugs and alcohol fail to replicate for me. That flavor of complete mediocrity.

Whenever the McRib does come around, I'm still fearful of what may occur, of what treasure I stand to lose at the feet of the golden arches. One positive thing about the McRib is that when it departs, I know it signals that better times (ones easily cured by drugs and alcohol) lie not far behind.