The way the McCain camp has reacted to my revelation about his not voting for Bush in 2000, immediately moving into kill-the-messenger mode, is further confirmation of what has happened to McCain -- now willing to say or do anything, or sling mud at anyone, to satisfy his hunger for the White House.

And I'm curious, at exactly what point did Mark Salter decide I was "a flake, and a poser, and an attention seeking diva"? Was it before or after I hosted a book party at my home for the book he co-wrote with McCain, Faith of My Fathers? 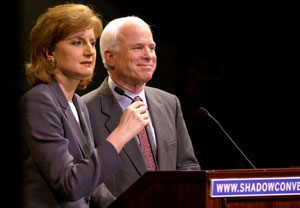 Was it before of after he told me during one of these conversations that George Bush had personally asked McCain to pull out of keynoting the Shadow Convention, but that McCain had decided to do it anyway?

Was it before or after he thanked me for accepting McCain's invitation to join the board of the Reform Institute McCain founded in 2001 (and from which he resigned in 2005, after it was revealed that he had solicited $200,000 in contributions from Cablevision for the Institute -- and wrote a letter to the FCC supporting Cablevision's interests)?

As you can see from the many, many newspaper columns I wrote singing his praises, John McCain was one of my political heroes.

Here's one column where I compared him to a modern day gladiator, inspired by his vow "to have blood all over the floor of the Senate until we accede to the demands of the people" for meaningful reform. In the column, I credit Salter as McCain's "fellow gladiator," and include a quote he gave me... before I flaked out on him and started posing and seeking attention.

But hero-worship dies hard, which is why it took so long for me to see that the man who had been willing to take on his own party and redefine what it meant to be a "loyal Republican," who stood up for his beliefs in campaign finance reform and his opposition to unconscionable tax cuts and even more unconscionable torture, was no more.

It's why I described his fall as Shakespearean (and, speaking of the Bard, hearing the invective spewing from the McCain camp in response to my post, "thou doth protest too much, methinks" leaps to mind).

This isn't Mitt Romney we're talking about, folks -- a man for whom pandering and flip flopping fit like a perfectly tailored suit. This is John McCain, a man whose personal history, in the words of Newsweek in 2000, "makes the other presidential candidates look like pygmies" -- and who, at one time, before he held a fire sale on his principles (Everything Must Go!), was ennobled by that history and had the chance to become that rarest of things -- a real leader.

Previously:
Arianna Huffington: What John McCain Told Me, and What it Says About How Far He's Fallen [Updated]

Flashback:
Slater Insults Student Protester; Protester Responds
Remember Jean Rohe, the student commencement speaker at the New School who, in 2006, discarded her originally prepared remarks and instead delivered a speech that questioned the university's decision to extend an invitation to McCain to deliver that year's commencement address -- with McCain sitting right behind her? She blogged about her decision on HuffPost, prompting an angry reaction from Mark Salter, posted in the comment section of her post. Here is Salter's comment, and here is Rohe's response.

Image courtesy of the Philadelphia Inquirer