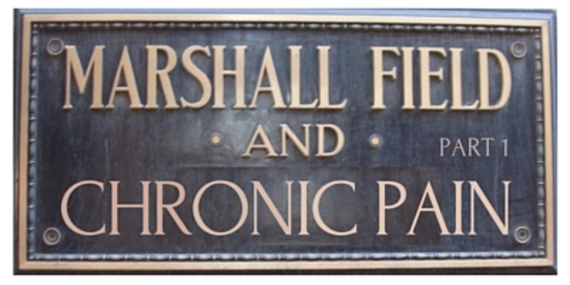 What do you think of when you hear the words, Marshall Field? The department store, The Chicago-Sun Times, the World Wildlife Fund or any of these American success stories? 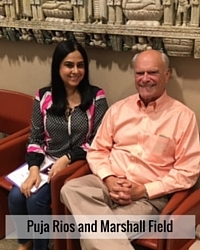 The Field's are American Royalty, who for generations have been committed to philanthropy and conservation, doing more than their part to help make the world a better place.

Yet for the past 40 years, Marshall Field V has been living with Fibromyalgia. I had the rare opportunity to sit down and speak with Mr. Field about his Chronic Pain, a subject that he has never talked about publicly. This is his story.

Undiagnosed for 25 years, Marshall Field dealt with feelings of depression and hopelessness as he tried time and again to convey the pain he was experiencing in his body. At one point, when he became so weak and had lost a concerning 20 pounds, Marshall knew there was something very wrong, but no one could figure out what.

On His Symptoms, Pre Diagnosis

"I would get a lot of pain, and try not to do things that would make the pain worse. People would yell at me and say, 'Oh, come on, you can do it.' So I tried playing tennis, and sooner or later, I pulled something in my shoulder and my elbow.

The pain got worse and worse, and in 1978, I had my first operation on my elbow.

After each surgery, I did nothing. No movement, no physical therapy. So during 'recovery', my condition just got worse.

I would wait three months and off I'd go again. But later on, in the '80s, I would get the same pain, like a tennis elbow pain except it would be in my back for a while and then it would go to my knee. It was then that I realized that this wasn't an injury, that it was something else.

In 1996, my wife recommended that I see a rheumatologist, Dr. Robert Katz . That's when I heard for the first time that what I had was called Fibromyalgia."

When asked how it felt to finally have a diagnosis, Marshall said, "Oh, it made me feel totally happy, because I wasn't crazy."

Marshall's first flare-up was in 1971. He says the flare-ups "break through" about two to three times a year and can take up to two weeks to recover.

"When the kids grew up, my wife and I took up golf. I can only play 9 holes. If I try to play 18, I might get to hole 13 before I feel the Fibro. Then everything collapses without a warning.

During a Flare or 'misfire of the signal,' I take extra Amitriptyline and try to do a little less with the flared point, and then I can get it under control. I do a little more stretching and then I do some digging on the affected part of my body.

At that time, everybody said I should stretch. So I thought, 'Okay, if I'm going to stretch I have to stretch everything,' because if you leave anything alone, that's where it [the Fibro] will go back again."

Marshall has never let Fibromyalgia stop him from making moves in his career but when asked about his personal and family life, he had this to say:

"When I was at my low point before being diagnosed, I didn't participate in most family life. The little ones growing up didn't pay much attention to it. I'd say this lasted for about 13 years, until I found Dr. Katz.

I gave up tennis. I wouldn't give up fishing. And I do a lot of fishing, I'm a Flycaster.
I have all kinds of gadgets I use when I'm out fishing.

"I know certain things I eat are not good for me, like chocolate. But I still eat it so I can tell my fibro 'Hey, get a life.' I just made up my mind that I wasn't going to let this 'thing' radically change my life now that I knew what it was.

When the Fibro was at its worst, I used to have stomach problems. So I ate less and drank less. In fact, I quit drinking for two years. And then as I got better, I kept looking at red wine, and I got better and better. So I started with one glass a day. Then two, now three.

When my arm was bad, I thought, 'Okay, how can I not use this arm in fighting a fish?' And I figured out that if I took a cheap iron clothes hanger--the wire one--and I pulled it out, I could put it over my head, and I could put the hanger part under the fishing rod. And I didn't need to use this arm at all. I could use my back and my neck."

When I asked how often he would use his invention, he said, "Well, whenever it was tough. Fibro is not getting between me and my fishing."

One tip Marshall has for people diagnosed with Fibromyalgia is that they understand this is probably for the rest of their lives. And so, putting off getting to it isn't going to buy you anything. Coming up in Part 2, find out how Marshall manages his Fibro with tips, treatments and inspiration.

Please take 15 seconds and help us urge The White House to call on Congress and the Department of Health and Human Services to implement and fund the National Pain Strategy. This will advance discovery, research, education and access to pain care. Sign the petition now. #ispeakforpain

"Me vs. Fibromyalgia" is a biweekly, one-of-a-kind series designed to give readers and warriors affected by Fibromyalgia a comprehensive look into the facts of the disease and the story of a driven, high-achieving business woman who wouldn't take no for an answer. I've chronicled eight years of experience with Fibro including chronic pain and fatigue, low energy, doctors, relationships and more, and hope to offer answers and support to those who seek them.

Disclaimer: I am not a doctor. All information presented should be regarded as friendly advice and opinions based on my own experience and research. I am not making an attempt to prescribe any medical treatment and the information contained in this blog is not intended to replace a one-on-one relationship with a doctor or qualified health practitioner.