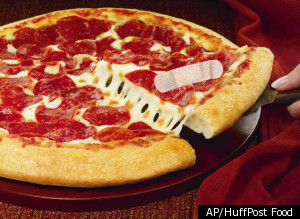 On June 9th, Ken Wieczerza of Ballston Lakes, New York, took a slice of leftover Pizza Hut out of his refrigerator and took a bite. Because the pizza was cold, its firmness was not unexpected. But there was a rubberiness to the texture that he did not expect. He spit out the pizza, and saw, to his disgust, that a bloody bandaid had been baked into the crust, according to the Albany Times Union.

He was upset, and sought recompense from Pizza Hut, but the chain did not respond. He had not planned to take the matter public, but Pizza Hut's inadequate response forced his hand, he's said. He hopes he will not develop a blood-borne illness from the bandaid.

That, my friends, is what we at HuffPost Food like to call a mealbreaker. Below are fifteen more that have cropped up in the past decade alone.