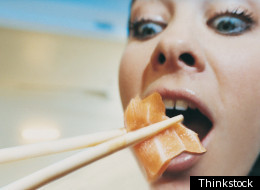 It's no big secret that spicy tuna sushi isn't as healthy as traditional styles, like unadorned sashimi and sushi. It's usually smothered in a mix of hot sauce and mayonnaise -- hardly low-calorie. But one New York woman allegedly got something truly sickening in June 2008, the last time she ate a roll of her favorite food at Planet Sushi on the Upper West Side of Manhattan: semen.

According to court documents published on Eater today, the woman had taken a bite of her saucy sushi when she tasted something semen-like. She wasn't in New Zealand ordering horse semen shots, so she was outraged. She sent the sushi to a laboratory for testing and filed a lawsuit against Planet Sushi. The labworkers tested it three times, and found possible body fluids on the final attempt. But then, the woman apparently left the sushi at the lab until it spoiled and they disposed of it. Planet Sushi apparently filed a motion to dismiss the lawsuit the other day, on account of the destroyed evidence, but the woman claimed that she still has samples in her fridge. Three years later, that doesn't sound all that promising. But if this is legitimate, let's hope she finds justice for her sickening mealbreaker. Read the full report at Eater NY.

Whether or not she does, the woman is not alone. Below are 17 more examples of disgusting mealbreakers from the last decade.

1 / 17
Bloody Bandaid In Pizza Hut Pizza
An upstate New York man found <a href="https://www.huffpost.com/entry/mealbreakers-bandaid-pizza-hut_n_915489#s319946&title=Disemboweled_Mouse_In" target="_hplink">a bloody bandaid in baked into the crust of his Pizza Hut pizza</a> in June of 2011. He sued after the company failed to address his concerns.
AP/HuffPost Food