Like many Mormons, the recent excommunication of Mormon feminist activist Kate Kelly put me at a loss for words. But when all is lost, Mean Girls explains everything. (And distracts me from dealing with really complicated emotions.) 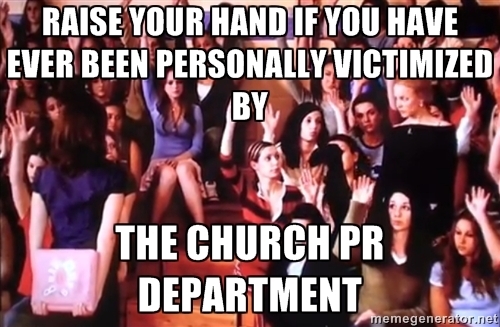 Last year, President Uchtdorf was all, "Regardless of your circumstances, your personal history, or the strength of your testimony, there is room for you in this Church." So even the feminists, right? Even the ones who want ordination, right? Big Tent Mormonism:

But Jessica Moody was all, "Ordain Women! Stop trying to make female ordination happen! There is no Big Tent!"

And Mormons who don't understand why people who support Ordain Women don't just leave are like:

And when Doug Fabrizio suggests that the guidelines on what constitutes apostasy seem a little blurry, Ally Isom is like:

And then Doug's all, "Where does it say in Mormon doctrine that women cannot have the priesthood?" and Ally Isom is all, "It Doesn't." And then everyone up in the COB was all:

So everyone, (and by everyone, I mean some dudes) got together, and decided how to define apostasy. Something about "some members in effect choose to take themselves out of the Church by actively teaching and publicly attempting to change doctrine to comply with their personal beliefs." Because everyone has agency and access to personal revelation, but if people start agreeing with you, and adding their voices, then the Church is all:

So even though Kate Kelly/Ordain Women agreed with Elder Oaks when he said only God can change church doctrine when they stated, "I appreciate this acknowledgement that priesthood is God's power and understand that only God can make changes to its administration. I believe this affirms the LDS belief in continually seeking further light and knowledge from God, and I trust our leaders do so daily," suggesting that God might someday agree with a message of egalitarianism over patriarchy is really why Kate Kelly doesn't get to be Mormon anymore. Apostasy according to Mormonism: Not agreeing in the right way.

As for women hoping for the Priesthood, Mormons are passing it out to preteen boys like:

And then walking by faithful women all...

And by "sluts and whores," I mean "apostates and less-faithful." And by "guys," I mean "other Christians."

The first sign of being a Mean Girl? Not knowing you're a Mean Girl. Gretchen Weiners -- I mean, Mormons are like, this is a Court of Love! Excommunication is a process of inclusion, not exclusion!

But really, they're all:

For those of you unfamiliar with Mormonism, here's a quick guide to the people mentioned in this post:

Kate Kelly: founder of Ordain Women, a group of Mormon activists agitating for female ordination. She was formally excommunicated this week.

President Uchtdorf: Member of the First Presidency in the LDS Church. He is second counselor to prophet President Monson.

COB: Church Office Building. Housing for the administrative staff for the LDS Church.

Elder Oaks: one of the Twelve Apostles in the LDS Church.

The original version of this post appeared on my blog, The Mormon Child Bride.