I know that's what you called yourself in that ad you placed in your local Wyoming newspaper. The one that reads "VERY mad mother selling 16 yr. old son's 1993 Ford Ranger. Drove 3 mos. before son forgot to use his brain and got caught driving drunk. $3500 OBO. Call meanest mother." 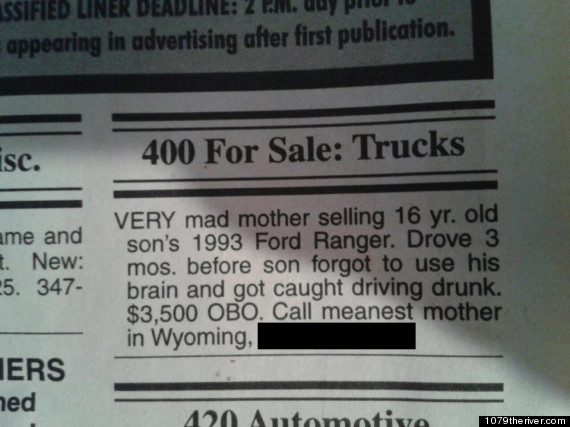 I am guessing you don't really believe that. The Internet tells me that you are a trucker in Greybull, Wyo., which means you are likely one tough woman. You also know that the mix of alcohol and steering wheels can be lethal, and that owning a pick-up is a privilege.

I suspect you use "meanest" sarcastically; it's probably what your boy is calling you. But I feel like you know what he can't yet know -- that the most important thing a parent can do sometimes is be mean. Being mean might keep them safe and even help keep them alive.

Your ad is one in a long line of very public declarations by parents that their children probably thought were mean. There's the eBay post that Dawn Meehan created to sell the Pokemon cards that her children snuck into her shopping cart when she had explicitly said "no." There's Tommy Jordan, the Laptop Shooting Dad, who put eight bullets into his daughter's computer after she ranted about him on Facebook. There are all those fathers who have posted videos of themselves destroying their children's cellphones -- one because his daughter "sexted", another when he received a bill for nearly $5000 for 10,000 texts sent on a phone that quite purposefully had no texting plan.

In all those cases public opinion was, shall we say, divided. For every online comment nominating Jordan "Father of the Year" there was one that suggested he be reported to Child Protective Services. In your case, though, everyone seems to agree. A local radio station put a picture of your ad on their Facebook page a week or so ago, and more than 5000 people have chimed in to say "Go you." (61,000 "liked" it.)

Part of the difference has to do with distaste for making parenting so very public. Anger at the techno-bashing dads was not about the punishments, but about the exhibitionism with which those punishments were carried out. (The violence had something to do with it too; I'm pretty sure you can take away a phone or laptop without destroying it first...)

You, on the other hand, didn't seek attention. And you certainly didn't make a YouTube video of yourself shooting the beejeezus out of the pick-up. You simply took out an ad -- an actual classified ad in an old-fashioned local newspaper -- and did what a parent should do.

I hope you sell your truck. I hope you take the money and invest it at a conservative interest rate in your son's name, and then use it to help send him to college. I hope one day, when that part of his brain that moderates risk finally matures, he thinks to thank you.

And I hope that all the readers who already are sending their thanks, the ones who are marveling that stiff-spined mothers like you still exist, will take heart from your example. Responsible parenting doesn't have to mean telling the whole world where you draw the line.

But it does mean making it clear to your child.