It's not that easy for a person to disappear. In today's heavily connected world, it may be possible for someone to go off the grid or take an electronic sabbatical. But if an emergency arises (or someone files a missing person report), chances are pretty good he'll be found. Unless, of course, something terrible has happened.

Whenever someone goes missing, there's always a backstory which can explain their disappearance. How a writer will use that event to craft a novel, a stage drama, a screenplay, or an operatic libretto remains to be seen. Of course, that's assuming that the missing person's remains will ever be seen!

The other was a notorious musical comedy flop that was pronounced dead on arrival after its opening night on December 8, 1991. The theatre critic for The New York Times (Frank Rich) ended his review by stating that "We can look forward to hearing a lot more from Ms. Prince. In the meantime, there is no escaping the unfortunate fact that the liveliest thing in Nick and Nora is a corpse." Potential ticket buyers quickly said "Asta la vista!"

Directed by Giovanna Sardelli, the San Francisco Playhouse presented the world premiere of In A Word (a new play by Lauren Yee) as part of its Sandbox Series. As Yee explains:

"In this play, objects have a life of their own. Objects come up again whether you want them to or not. Words also come up again, and sometimes the characters realize this or not. Time is very fluid." 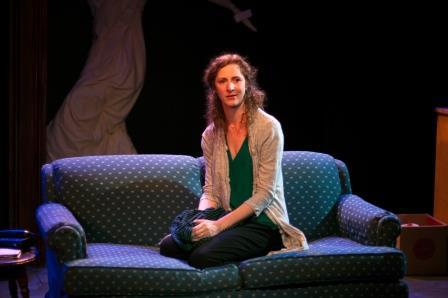 Jessica Bates as Fiona in a scene from In A Word (Photo by: Fei Cai)

The action focuses on a couple marking the two-year anniversary of their young son's disappearance. Nothing seems to make sense to the mother, Fiona (Jessica Bates), who is still clutching at straws. With the case about to be closed by the local police, Fiona has even thought it could be helpful to present the detective from the missing persons bureau with a cantaloupe that might have recently had the kidnapper's fingerprints on it. Needless to say, he's more interested in eating the cantaloupe.

Fiona's husband, Guy (Cassidy Brown), is trying to get Fiona out the door so they can at least enjoy dinner at a fancy restaurant and start to rebuild their lives. But with his wife's ongoing depression, distraction, and lack of logic, dinner seems a long way off. 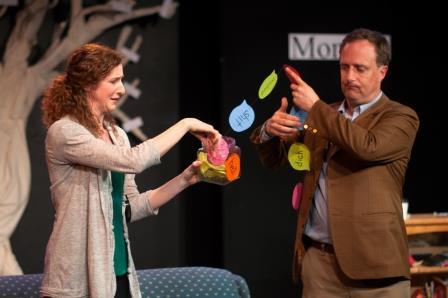 Jessica Bates and Cassidy Brown in a scene from In A Word
(Photo by: Fei Cai)

The third (and, by far, most interesting) actor (Greg Ayers) keeps popping up as part of a game of Whac-a-Mole that is playing out in Fiona's mind. At any given moment he might be the photographer who snapped her son's school portrait, the principal (who was also her boss), or the kidnapper who stole her son while her car was parked at a gas station. He could also be the detective working the case, her husband's best friend, or her missing seven-year-old boy, Tristan (who might have Asperger syndrome). 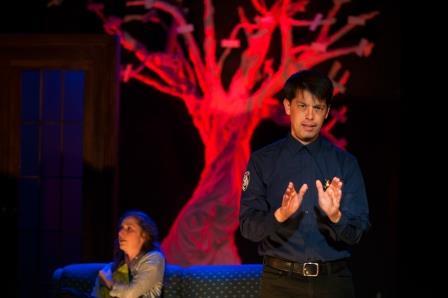 Jessica Bates and Greg Ayers in a scene from In A Word
(Photo by: Fei Cai)

Despite its relatively short running time (80 minutes), it takes a while for Yee's play to gain momentum as the audience tries to follow what's going on in Fiona's extremely cluttered and confused mind. As a result, a great deal of attention is siphoned off to the actor inhabiting multiple roles, whose versatility at times may seem far more interesting than Yee's script. Thankfully, Yee steers the story to a touching resolution.

Working on a unit set designed by Catalina Nino, Sardelli's three-actor ensemble did a fine job of bringing Yee's script to life. Unfortunately, I still can't figure out the symbolism of the tree which haunts Fiona and Guy's home.

Nearly 25 years have passed since Nick & Nora (a musical written and directed by Arthur Laurents with music by Charles Strouse and lyrics by Richard Maltby, Jr.) met a sudden demise on the Great White Way. Based on characters created by Dashiell Hammett for The Thin Man (and with a cast headed by Joanna Gleason, Barry Bostwick, Christine Baranski, Faith Prince, Debra Monk, Remak Ramsay, and Chris Sarandon), the show would seem to have been blessed with many tried and tested Broadway talents.

To understand what went wrong, perhaps it's best to follow the money. Nick & Nora was apparently underfunded and, in a misguided effort to save money, the producers decided against an out-of-town tryout (opting instead to run the show through 71 preview performances). Without the perverse appeal of a vehicle like Spider-Man: Turn Off The Dark (which racked up 182 preview performances prior to its opening), the money needed for marketing during Christmas season ran out. Faced with fierce competition for entertainment dollars (and having exhausted advance ticket sales from theatre parties), the producers would have been hard pressed to fill the cavernous 1,611-seat Marquis Theatre during the holidays. With the traditional January box office doldrums on the horizon, a mercy killing was the obvious solution.

San Francisco's 42nd Street Moon (which specializes in re-examining "lost" musicals) recently revived Nick & Nora in a production directed by Greg MacKellan, with choreography by Staci Arriaga. While the show is nowhere as bad as some of the Broadway stinkers I've seen (Something More! Maggie Flynn, Georgy, Her First Roman, I Had A Ball), it's a weak and fairly mediocre vehicle that lacks the musicality of Jennie, the sophistication of No Strings, or the sentimentality of Here's Love! Even Bajour was more exciting. 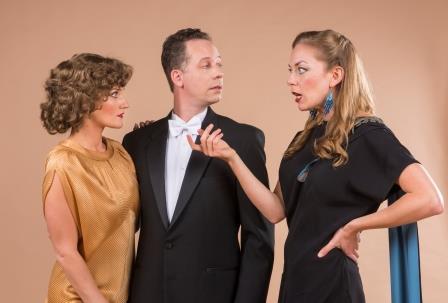 With Dave Dobrusky as music director (and sets and costumes by Hector Zavala), 42nd Street Moon's cast handled the material with aplomb, enabling the crooked bookkeeper, Lorraine Bixby (Nicole Frydman), to rise from the dead (an especially nifty trick for an Easter Sunday matinee) on numerous occasions in an effort to explain why a wealthy, bitchy actress's husband had gone missing.

As the famous Nick and Nora Charles, Ryan Drummond and Britanny Danielle were a visually appealing couple (although I doubt the audience cared very much about their relationship or Nora's determination to prove herself as a female detective). Allison Rich scored strongly as the narcissistic Tracy Gardner whose Japanese butler, Yukido (Reuben Uy), proved to be the loyal villain. Megan Stetson drew laughs as Lorraine's lesbian girlfriend, Maria Valdez, who was hoping to break into motion pictures. 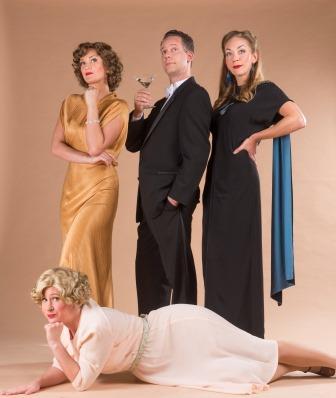 42nd Street's production of Nick & Nora proves that the show is far from a total dud. It's reasonably entertaining and features some pleasant songs ("Is There Anything Better Than Dancing?" "Everybody Wants To Do A Musical," "People Get Hurt," "Men," and "Look Who's Alone Now").

One of the show's bigger problems is that the crucial relationship between Nick and Nora doesn't seem to generate much interest or sympathy (primarily serving as an excuse for the rest of the script's hijinks). Thankfully, Arthur Laurents (a veteran of Hollywood and Broadway) peppered his script with some zingers.