In the midst of every winter, I eagerly anticipate the excitement and hype that comes from two major sporting events. One, perhaps not surprisingly, is the Super Bowl -- in all its splendid, commercialized and global glory -- and the other, perhaps less celebrated by the general public, is the Australian Open Tennis Championship -- one of the four Grand Slams that takes place each year and it's in the middle of January.

In the past week, however, the excitement of the Super Bowl has been quickly "deflated" with talk of the Patriot's latest "cheating" scandal involving their handling of "deflated" footballs allegedly used to help them secure their victory over the Indianapolis Colts at the AFC Championship game.

Such disappointment naturally leads one to ponder the evermore-disappointing state of professional sports and, more specifically, the behavior and conduct of professional athletes. Indeed, it may be difficult to maintain hope in the "business" of sports and in the possibility of there ever existing true "sports heroes" for the young to aspire to.

Yet, "cheating" or "immoral conduct" in sports is certainly not new. A quick look back at the 1904 Olympics and the 1919 Chicago White Sox (explained here) confirms that, even before the modern day obsession with sports, not all athletes have been interested in winning by honest means.

The difference today, however, seems to be in the frequency of such incidents -- incidents which can be partially explained by the higher stakes, fiercely competitive atmosphere and globalization of the sports industry. Indeed, between the Ray Rice, Adrian Peterson, Donald Sterling and Luis Suarez scandals, 2014 proved to be quite the year for the professional sports industry.

But, be that as it may, sportsmanship in its most pure form -- defined as "fair play, respect for opponents and polite behaviors by someone who is competing in a sport or other competition" -- can still be found. Perhaps not on the 2015 Super Bowl field, but over on a tennis court in Australia where Roger Federer, despite his recent third-round loss, continued his reputation as a "picture of class and composure."

Considered "one of the greatest players of all time" -- surpassing Pete Sampras' 14 Grand Slam titles with 17 -- it is not just his statistics, titles and records that have earned him this status. It's the way he conducts himself -- both on and off the court -- that supporters, commentators and even opponents agree make him truly "great." 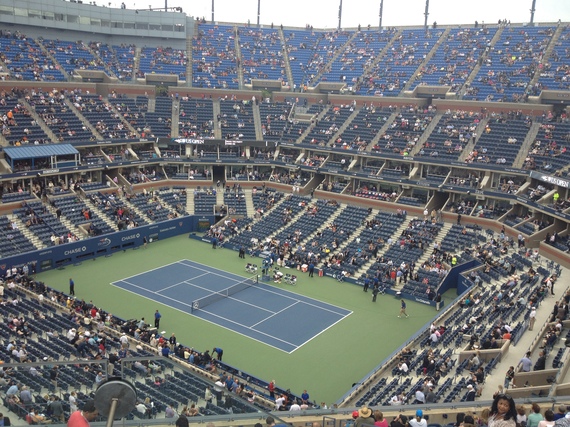 Humble, classy and dominant, he truly is an all-around class act with poise and grace, in both victory and defeat.

In fact, after losing to Rafael Nadal in the final match at the French Open in 2008, he commented with professional poise:

"I was hoping for a better outcome, no doubt, but Rafa played well today... He made it hard for me and... was better, so it was a tough loss, but I tried, and I hoped and it wasn't enough."

As for Federer's conduct "off court", Andy Roddick (a long time rival of Federer's) says it best: "He's a real person. He's not an enigma. Off the court he's not trying to be somebody. If you met him at McDonald's and you didn't know who he was, you would have no idea that he's one of the best athletes in the world."

Perhaps, like the recent proposals for mandatory ethics training for our Congressmen, the NFL would be wise to do the same for their coaches and players. And who better to "teach" sportsmanship and model respectable athletic conduct than Roger Federer? Maybe that can be his next career.

Now wouldn't that be a grand slam!