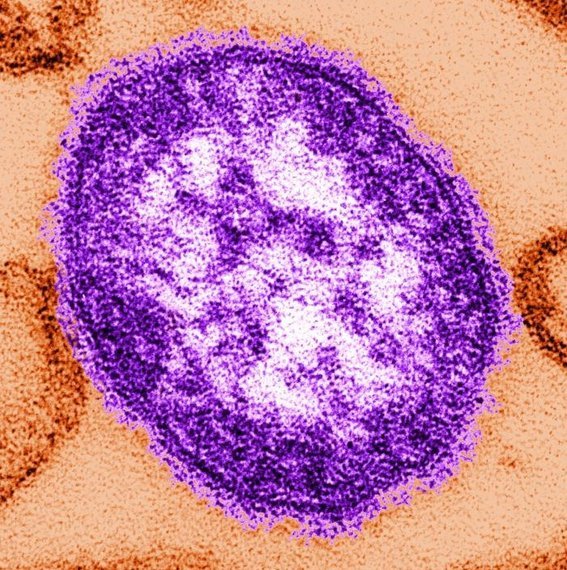 This thin-section transmission electron micrograph (TEM) reveals the ultrastructural appearance of a single virus particle, or "virion," of the measles virus. (CDC/Getty Images)

Measles disease, while highly contagious, can easily be prevented by vaccine. The recent death of a woman in Washington State confirmed the first-known measles death in the United States since 2003. The woman had no obvious symptoms of the disease that it wasn't until after her death that the autopsy results confirmed presence of measles disease.

In early 2015, there was another scare of measles outbreak at Disneyworld, California. According to CDC (Center for Disease Control and Prevention), there were 178 cases of measles reported in 24 states between January 1 to June 26, 2015 and 5 outbreaks representing 85 percent of reported cases so far this year.

CDC also reports that in 2013, there were 11 measles outbreaks in the US while in 2014, that number was 23 and included one large outbreak of 383 cases, occurring primarily among unvaccinated Amish communities in Ohio.

In 2013, there were 145,700 measles deaths globally -- about 400 deaths every day or 16 deaths every hour World Health Organization (WHO). It takes about 7-14 days before a person who has been exposed to measles virus develops first symptoms and even then, there's nothing unique to suggest that the infection is measles disease.

As can be seen, the rash appears approximately 10-19 days after the initial exposure to the disease. It's therefore significant that anyone with these symptoms seek immediate medical attention.

Why should everyone be concerned?

The measles outbreaks are causing concerns not just because the disease was believed to have been eliminated in the United States in 2000, but also because, it is the most infectious disease known to man.

Considering the high level of globalization in the 21st century, the highly contagious nature of measles virus, the easy manner in which the disease can spread (e.g. coughing, sneezing, close personal contact or direct contact with infected nasal or throat secretions) and the presence of unvaccinated people in communities, there exists imminent threats of measles outbreaks.

What are the sources of measles disease in the US?

Furthermore, unlike the U.S. where various medical-exemptions for vaccinations are allowed, Mexico has a vaccine policy that's not only free and universal, but also mandatory. Every registered Mexican child is issued with a "National Vaccination Card" where a complete vaccination history is recorded. The card is then utilized as a mandatory requirement for enrollment in public schools and most private schools.

Measles outbreaks have largely been associated with communities with groups of unvaccinated people. Currently, only three states (Mississippi, West Virginia and California) have strict school vaccination laws in place (California passed the law in June, 2015).

The anti-vaccine campaigns and groups with certain cultural/religious beliefs that prohibit use of vaccines are believed to contribute to populations with unvaccinated people. The anti-vaccine movement is grounded on a belief that there exists a link between vaccine and autism: That MMR vaccine causes autism.

Many people, including some U.S. parents, believe that their children would get autism if given, especially a "cocktail" dose of MMR (an immunization vaccine against measles, mumps, and rubella) vaccine.

The claim of a scientific link between MMR vaccine and autism has since been debunked, but not everyone should be expected to plan visits to MMR clinics: It takes time and effort for attitudes to change.

Infected travelers entering the U.S. from other countries are believed to present exposure risks especially when they come in contact with U.S. communities with large unvaccinated individuals.

WHO reports that between January 1 2014 and March 1 2015, there were over 23 000 cases of measles in the WHO European Region. European countries are popular vacation-destinations for Americans, especially during summer season. When unvaccinated Americans travel abroad, especially to countries with high cases of measles disease, they bring back the disease into the country.

Regions of the world frequented by displaced populations and groups in refugee camps are at great risks of exposure from infected patients, due to overcrowding.

Sometimes, the socio-economic and cultural parameters may play role in determining the number of people in a given population who gets vaccinations. Populations with high numbers of educated people tend to have greater numbers of vaccinated individuals than populations where vast majority of the residents have low levels of education. Other times, some people are just vaccine-resistant and are not willing to get vaccinated.

Last, but not least, countries frequented by conflicts and civil unrests and those recovering from natural disasters, have damaged health infrastructures and health services, making it challenging to sustain immunization routines in those localities.

The significance of vaccinations

Irrespective of the sources and reasons for the existence of unvaccinated groups in populations, a single fact remains; unvaccinated populations lack herd immunity to stop/slow spread of infectious diseases, measles included.

Herd immunity refers to the level of immunity in a population that prevents an epidemic. When a large percentage of a population is vaccinated and has become immune (resistant to a particular infection or toxin owing to the presence of specific antibodies or sensitized white blood cells) to an infection, there is protection rendered to those who are non-immune to the infection.

It should be noted that herd immunity does not provide high level of protection at individual level. Full individual protection/immunity is achieved when individuals get vaccinated. Vaccinating the majority of a population is imperative to achieving herd immunity.

Herd immunity offers a fundamental source of protection to the vulnerable members of a community including those who cannot be vaccinated.

Newborn babies who are too young to be vaccinated, HIV/AIDS patients with compromised immune response, chemotherapy patients with weakened immune systems, pregnant women, malnourished persons and the elderly, are just a few of the groups in populations that, without herd immunity, would be at risk of infectious diseases.

Vaccination still offers the best protection against measles disease. An adequate vaccine policy embraces a multi-pronged model that accommodates among other aspects, the community health status as well as the socio-economic and the cultural differences of the community. Disease-control approach is most likely effective when efforts are forged that target active-community-involvement and health-education of all community members.

(NB: Herd immunity does not prevent the spread of all infectious diseases e.g. there is no herd immunity for Tetanus disease).