Along with vaccines for polio and mumps, the measles vaccine was a triumph of investigative research and public health when it debuted in 1968. It quickly became part of the lineup of childhood injections that would inoculate the child and protect society from the scourge of the sometimes fatal and always painful disease. Widespread vaccinations eventually led to the elimination of measles in the U.S. in 2000 and the Americas (North, Central and South) in 2002.

But a series of stumbling blocks -- notably, a fraudulent and discredited 1998 study linking vaccinations to the onset of autism -- set vaccination rates back in certain communities in the U.S. The backsliding has resulted in several measles outbreaks in the past year in a country that had already declared measles defeated. Read on to see why the U.S. should be concerned about this unprecedented measles resurgence. 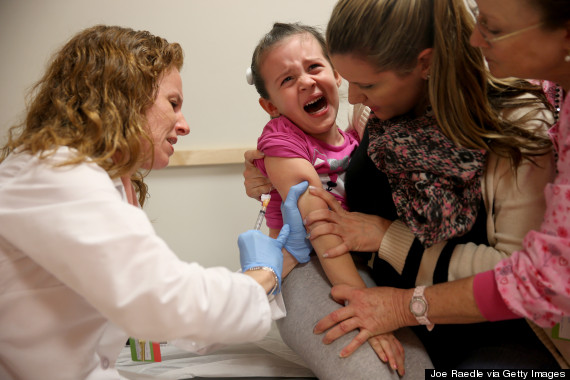 The number of 2015 measles cases
linked to a Dec. 2014 visit to the Disneyland theme park
in Southern California. Eleven cases linked to Disneyland were caught last year, and thus are part of 2014's measles figures.
The number of people that
Arizona is currently monitoring
for possible measles exposure. Measles is
just that contagious
.
...of people who aren't vaccinated will get measles if they are exposed to the virus.
The number of hours the measles virus can live, either in the air or on a surface. It's much more transmissible than Ebola, which frightened Americans in 2014 because of its scary symptoms and high mortality rate.

The CDC notes that before 1963, an estimated three to four million people in the U.S. got measles every year, and of those people, 400 to 500 would die, 48,000 would be hospitalized and 4,000 would develop encephalitis, a dangerous swelling of the brain.

The year that the measles vaccine as we know it today was developed and first distributed. The vaccine dramatically lowered the number of measles cases in the U.S., and when health authorities began recommending a
second measles vaccine injection in 1989
, the measles rates dropped even further.
The year there was no continuous measles transmission for more than 12 months, which meant measles had been
eliminated in the U.S
. End of story, right? Unfortunately, no. Two trends -- an increasingly connected world and dropping vaccine rates -- are colliding to create mini measles outbreaks across the U.S. The Disneyland outbreak is only the most recent; a traveling Amish missionary returned from the Philippines last March and infected his community, where people had stopped vaccinating against the measles out of fear,
resulting in 382 cases
.

The consequence has been a slow but steady increase in U.S. measles cases. In 2014, there were 644 cases, the most in 20 years. 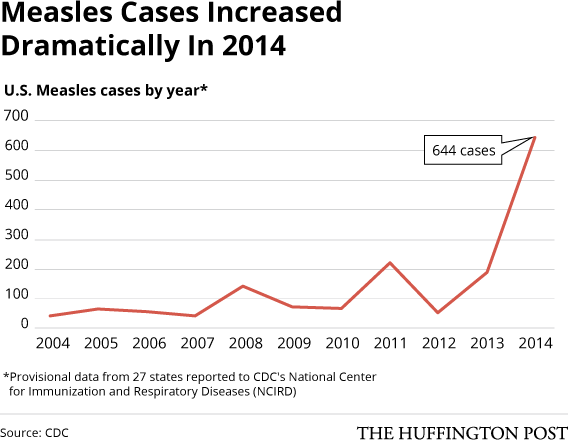 The
number of measles cases around the world
every year. Of those affected, an estimated 146,000 people will die from the disease. Travelers from the Philippines, which saw an estimated
57,564 suspected measles cases
in 2014, or Pakistan, which had an estimated
14,000 measles cases in 2012
, have been linked to measles importations in the U.S. This year, measles has been brought in from travelers returning or coming from Indonesia, Azerbaijan, Qatar, India and Dubai, according to Dr. Anne Schuchat, Assistant Surgeon General and the director for the CDC's Center for Immunization and Respiratory Diseases in a teleconference last Thursday.

While national vaccination rates remain steady, some areas of the country -- say, the Amish community in Ohio, or some suburbs in California -- are seeing more and more parents opt their children out of vaccinations. When travelers exposed to measles encounter large numbers of unvaccinated people in these communities, the virus can take hold.

The herd immunity threshold, or the amount of people who need to be vaccinated, to interrupt "sustained spread" of the measles virus, although vaccine expert Dr. Walter Orenstein of Emory University School of Medicine's division of infectious diseases notes that
even populations with higher immunity rates
have experienced outbreaks.

When communities fall below that threshold, they could potentially be setting the stage for a future measles outbreak. According to a recent Kaiser Permanente study published in the journal Pediatrics, certain California counties like Marin and Napa had under immunization rates that ranged from 18 to 23 percent between 2010 and 2012. Outright vaccine refusal in these areas ranged from 5.5 percent to 13.5 percent. 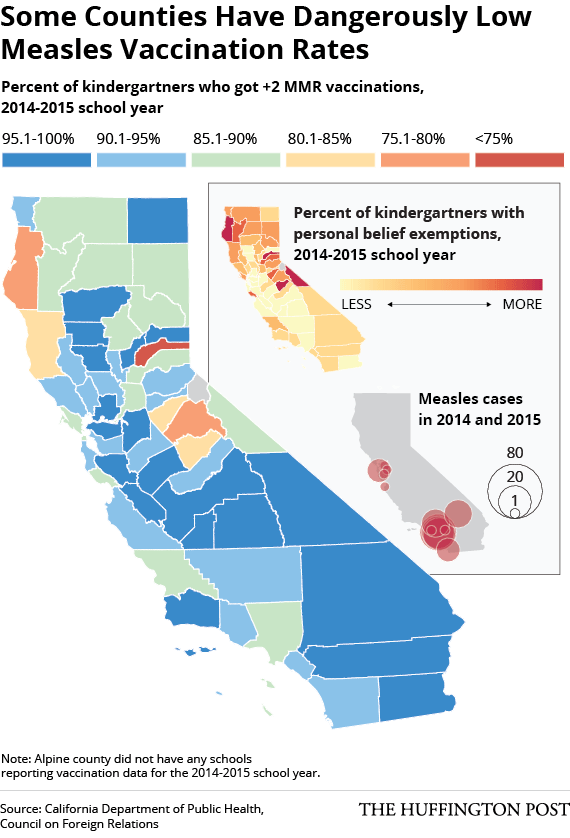 So what can experts do to reach these communities? Patsy Stinchfield, MS, RN, director of the Children's Immunization Project at Children's Hospitals and Clinics of Minnesota, has been treating measles patients and convincing parents to vaccinate their children for 37 years.

She compared these under-vaccinated communities in the U.S. to impoverished villages in developing countries in a phone interview with HuffPost and said public health workers needed to approach parts of the U.S. with the same sense of urgency they would in under-resourced parts of the world.

"I think our job is to bring vaccines to U.S. neighborhoods with the same kind of vigor and commitment as we see people doing in war-torn Pakistan," said Stinchfield. "There are health care workers that are risking their life to bring vaccines to the under- and unvaccinated, and I think we have to have a renewed commitment to bring vaccines so that every daycare, every school, every city, state in our country sets a goal of 100 percent vaccination."

Stinchfield is also an infectious diseases nurse practitioner and says that when she encounters parents who hesitate to vaccinate their children, she discusses her experience treating kids with measles complications. She often shows parents a photo of a child being supported by a ventilator after the virus spread to the lungs (called measles pneumonia) in order to convince them to vaccinate.

In addition to measles pneumonia, patients can also experience these other complications: