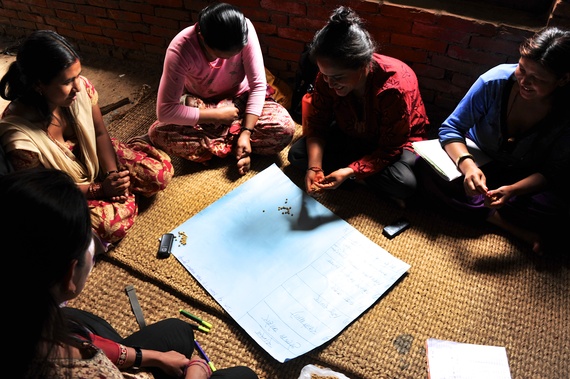 It seemed like a numbers game, in 2000, when 189 countries signed the United Nations Millennium Declaration which laid out priority areas of improvement in human wellbeing needed for a more just and equitable world. The Declaration included eight Millennium Development Goals (MDGs) which countries aimed to achieve by 2015, to help track progress of this commitment to make poverty history. It may have been a limited view of development and progress may have been patchy - but on arrival at the endpoint of the MDGs, we have certainly established one important principle; measuring progress is important and transparent measurement stimulates a culture of accountability.

This autumn in New York, the United Nations summit will convene from 25 to 27 September 2015 for the adoption of the new post-2015 development agenda. The new proposals - to be achieved by 2030- were recently agreed by Member States on August 2nd after a lengthy period of negotiation. The agreed plans set 17 new 'sustainable' development goals (SDGs) and 169 targets as successors to the MDGs. An agenda that is broader and deeper than the aspirations of the MDG era- aiming to track rich and poor countries alike - these new ambitions are a game-changer for development. As Susana Malcorra recently announced, the United Nations are challenged and stretched by these new aspirations:

"The sheer size, the depth and the complexity of this agenda challenges all of us, challenges the United Nations," - U.N. Secretary-General Chef de Cabinet Susana Malcorra.

In the last few years, statisticians, analysts and data geeks, like ourselves, have together spent considerable time creating and analyzing the emerging development database. That database tells a story and is a precious resource. We think quality data are critical for measuring progress in social development. By using data we can ensure accountability for the policies that are implemented to reduce global and local inequities. Here, we emphasise the need for better monitoring and accountability as the SDGs are launched. In looking towards the future we ought not to forget the MDGs - some of which are far from being achieved. Progress towards the ambitious new agenda should be measured and monitored in its full entirety - we have until 2030 to make the aspirations into a reality.

Key message
The goals and targets may have been agreed - but the process to find the right indicators and statistical measures has only just begun. An early draft of a possible indicator framework contained a list of more than 300 indicators. Many commentators have been quick to criticize such a long list as unwieldy, and unmanageable. Yet, we need plenty of indicators to be ambitious in development. A more recent list of 169 indicators has left experts howling about the important measures that are being missed.

The MDGs were a fraction as ambitious as the new SDGs and needed 69 indicators to track them. Half of these were concerned only with health. Yet there are many countries in which these targets have not even been achieved! In women and children's health for example - progress has lagged behind the aspirations that we had at the turn of the Millennium. Therefore, there are indicators there that desperately still need tracking and more that will help countries achieve their original goals! Now in 2015 we rightly have a hugely expanded health SDG - not only tackling the unnecessary deaths of women and children, but also Non-Communicable Diseases, traffic accidents, and increased survival for all. Apparently, the current plan is to use only 25 indicators to track this hugely expanded health agenda - whilst quietly trying to forget many of the old health indicators that have not made much progress. How can this ever make sense? For other SDGs that are totally new - including climate change- experts are suggesting new but untested indicators, whilst others are saying we do not have capacity in statistical agencies to measure new agendas. Surely we need plenty of indicators to measure these new and important areas of development too?

What are we proposing?
But 300+ indicators is bewildering and feels like too many. Political voices in the debate seek to reduce this number of indicators as an exercise in its own right - without heeding the experienced voices of data analysts and statistical offices globally and in each nation. The answer cannot be as simple as just deleting hard won statistical measures from the list - while discouraging new and important measurement techniques especially within climate change and environmental fields. Statistical offices may feel that 300+ indicators is a tall order - but given support and given a voice - they can manage to measure the new broad development agenda of our century.

In a recent Lancet article, Davis et al. (2015) made a suggestion that could help. A two-track SDG measurement framework could encompass a smaller number of high-level political indicators that could capture the headlines for each SDG while a separate, but interconnected, much larger group of detailed technical indicators could be tracked to make sure that measures are in place to make progress in each section of each goal.

The proposed two-track SDG indicator framework for 2030:
• Track 1 could monitor political goals (about 30 impact indicators) to assess overall progress regionally and globally.
• Track 2 could include a larger number of technical indicators to measure the means of implementation or processes towards each goal (300 indicators, or more). 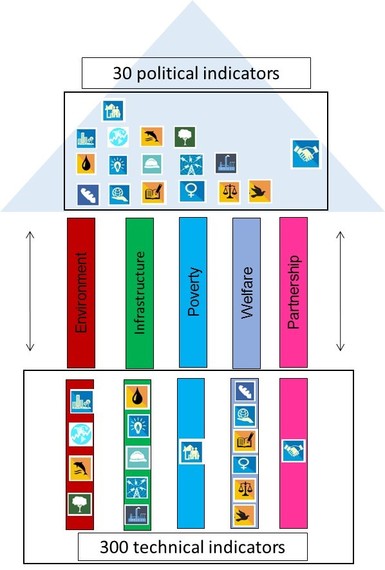 What is going on in current discussions?
On 6 March 2015, the United Nations Statistical Commission created an Inter-agency and Expert Group on SDG Indicators (IAEG-SDGs), composed of Member States and including regional and international agencies as observers. It is this group which is developing the world's proposal for a global indicator framework which will be considered by the U.N. Statistical Commission at its next meeting in March 2016. Only then will the indicators be near to finalisation - leaving global tracking for development in limbo while we absorb the results of the MDG measurement efforts. To our knowledge, this group has considered various lists of indicators, but has not considered SDG architecture proposals such as the two track idea, which could rationalise its activities. Currently, an open consultation is underway with all countries, regional and international agencies, civil society, academia and the private sector scheduled to take place up until 4 September, although it is not clear how ideas can be fed into the process.

Call to action
Now is not the time for weakness, neither in the implementation nor in tracking technical progress. The technical process should sustain the full content of the intricately negotiated agenda, but also to reduce the number of top line indicators to be feasible and accountable. We cannot be conservative in our measurement of progress in the post-2015 agenda. The measurement framework must empower the implementation of the SDGs and improve equity, welfare and environment for all for greatest and most inclusive developmental impact. But to make sense of it we need about 30 topline indicators for 2030...then at least 300 technical indicators to make sure the world does what it said it would!

Sylvia Szabo, PhD, is a Research Fellow in the division of Social Statistics and Demography at the University of Southampton. Her current research, part of the Belmont Forum funded DELTAS project, focuses on determinants of human well-being in environmentally vulnerable delta regions. Previously, Sylvia was an employee of the Global Fund to Fight AIDS, Tuberculosis and Malaria.

Zoë Matthews is a Professor of Global Health and Social Statistics and Co-Director of Global Health, Population, Poverty and Policy (GHP3) at the University of Southampton, UK. Originally a statistician and demographer, her current work focuses mainly on international health - specializing in health systems with a particular focus on sexual, reproductive, maternal, newborn, child and adolescent health, a field which she has worked in for over 25 years. She is currently working as an occasional consultant for UNFPA and also on an initiative called Mapping for Maternal Newborn Health. She has previously worked with the World Health Organization and the UK Department for International Development.