Wham. Nuti-Loaf. Choplets. FriChik. If you grew up Seventh-day Adventist then you are no stranger to these names. If you did not grow up in and around the Seventh-day Adventist community then you may be scratching your head about now. Just to be clear, no, they are not the names of rejected members of Our Gang or the cast of Grease. The aforementioned proper nouns are actually the brand names of several popular meat substitutes that are staples of the diet of many Seventh-day Adventist church members. Think of them as the all-stars of the meat
analogue world. 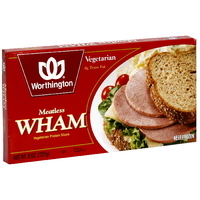 The Seventh-day Adventist denomination is a historically vegetarian group owing to the teachings of the prophetess of the church Ellen G. White who advocated for conservative dietary habits following a prophetic vision. So the story goes, she was at the home a fellow member of the faith, one A. Hilliard of Otsego, Michigan on June 6th of 1863, and was presented with a divinely inspired plan for a reform diet that would maintain the temple of God that is the human body. She would later write several tracts on the evils of meat consumption in which she described it's influence as one that would "excite and strengthen the lower passions" and which had "the tendency to deaden the moral powers." According to White meat was also said to derange the stomach, deaden the nerves and enfeeble the intellect as well create an appetite for liquor (the consumption of which Seventh-day Adventists also do not partake in).

So meat was bad and Seventh-day Adventists as early as the 1860s were told to avoid it. But for many, giving up meat is a psychological challenge on par with giving up smoking (also something SDAs don't do). So in order to help Seventh-day Adventists and visitors to the Battle Creek Sanitarium (the flagship institution of the faith and premiere health spa in the United States in the late 1800s) get the meat monkey off of their backs Dr. John Harvey Kellogg created the Nicorette of sorts of the nineteenth century in the form of...Nuttose!

The Battle Creek Sanitarium Food Company released America's first analogue meat product, a shelf-stable peanut-based cutlet in 1896. Nuttose could be seasoned to taste like mother's fried chicken or marinated in your favorite barbeque sauce and paired with mashed potatoes and your favorite side vegetable to resemble the traditional well-balanced American meal so many were accustomed to. 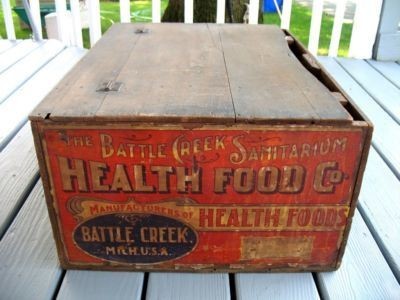 But the Battle Creek Sanitarium Food Company didn't stop there. While they were busy developing Kellogg's Corn Flakes they were also developing a new product called Protose. And while the name sounds like it should be applied to a character in a Shakespearan tragedy or the name of a strange man-servant from a Gothic novel it was actually another popular nut-based meat analogue. A delighted turn of the century housewife could pop open a can of the gelatinous log of legume-based protein and let it wriggle out of the tin cylinder and serve it to her eager family. 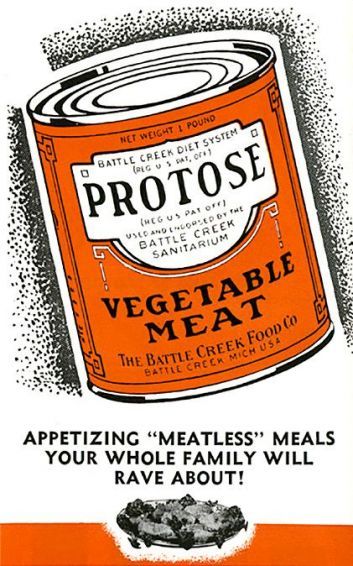 Okay, so the aforementioned description of Protose perhaps doesn't sound wildly appetizing but the Seventh-day Adventist pioneers of meat analogues got their act together pretty quickly. By 1905 the Sanitarium Foods Company was formed and they set about developing meat analogues that would have a richer and more savory flavor by using techniques employed to cure actual meat thus achieving a smoked flavor. By 1921 they were able to debut Smokene to the public. It was a soft pink gluten and nut-based protein that attempted to approximate the texture and flavor of ham. Though it most closely resembled today's wildly popular potted meat product SPAM.

In 1934 Sanitarium Foods added three more canned items to their product line and expanded operations in 1938 with a new four story plant. But along came competition in the form Worthington Foods who during the war years was able to capitalize on the national meat rationing practices and market "potted meats" that were not meats at all. In time Sanitarium Foods would become Loma Linda Foods and by the 1960s Loma Linda Foods and Worthington Foods would serve as the two largest manufacturers in the nation of soy-based food products.

The 1950s and 1960s were an exciting time in meat analogues. America was enjoying its post-war booms years and an Adventist man could drive his Detroit-manufactured sedan home to his single family home in the suburbs and look forward to the bounty of whatever Worthington Foods (or lesser-known brand Cedar Lake) product his wife may have chosen to put on the table that night. Wham. Nuti-Loaf. Choplets. FriChik. Okay, we're back to these all star names again (taste them and you will understand). 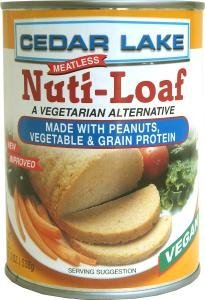 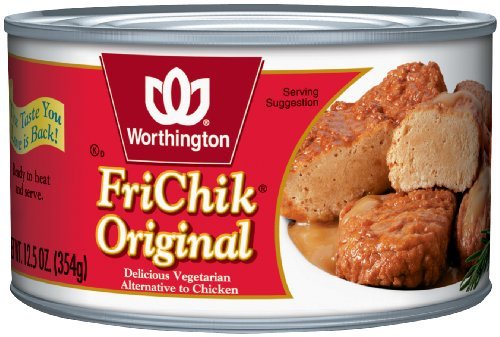 Excitement over meatless meat did not slow going into the 1970s. Nay, it accelerated as Loma Linda Foods, not to be outdone by Worthington Foods, introduced such tantalizing products as Meatless Chicken Loaf, Meatless Beef Loaf, Meatless Turkey Loaf and Meatless Luncheon Loaf. But that's not all...then came Meatless Bologna, Meatless Fried Chicken, Meatless Sizzle Burgers, Meatless Swiss Steak and Meatless Sizzle Franks in frozen varieties. Flavor notwithstanding, there is simply no denying that Loma Linda Foods just didn't have the same inspired names for their products that Worthington was able to create. Wham just has a jazzier and more appetizing ring to it than Meatless Luncheon Loaf...just sayin'.

In a series of mergers and acquisitions Loma Linda Foods and Worthington Foods eventually became one under the umbrella of that tried and true American food giant that bears the family name of the man who invented the first meat analogue back in 1896, Kellogg. The Kellogg Company then branched off with the Morningstar Farms product line which any regular visitor to the frozen food aisle at the grocery store should be familiar with. Today there are hundreds of large and small brands that cater to the growing numbers of vegetarians and vegans world-wide. In fact, according a report conducted by Markets and Markets, the global market for substitute meats is expected to grow at a CAGR (Compound Annual Growth Rate) of 6.4% between 2015 and 2020, landing at over $5 billion by 2020.

The meat analogue world is a far cry today where is began over a century ago. Frankly it is a far cry from what it was when I was kid a quarter of a century ago, eating the Big Frank hot dog my Grandma had packed for me to take to a Dodger's game so that I wouldn't have to suffer the horrors of an "unclean" Dodger dog. I remember the stares as though taking a veggie dog into the stadium was almost un-American. Today, not only does no one care but the last time I was at a sporting event there were gourmet mycoprotein and quinoa-based meat substitutes at all of the concession stands and the woman in line behind me congratulated me on my enlightened thinking and then started asking me pound for pound if I liked Bernie Sanders or Ralph Nader better.

But know that there exists out there an entire subculture of individuals who not only eat meat analogues as a staple of their diet but were raised doing so, and in my case, were born to parents and grandparents who were also raised to throw some FriChik and Choplets in the deep fryer and serve with a baked potato and some frozen peas and carrots. Meat analogues are not just a post-modern hipster-fueled cultural revolution but a long-standing tradition in the Seventh-day Adventist community. So if you are curious about trying these products but are too afraid to dive head-first into a can of Vegi-Scallops on your own get yourself invited to an Adventist's home and enjoys the gastronomic delights of meat analogues. 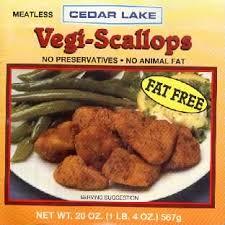