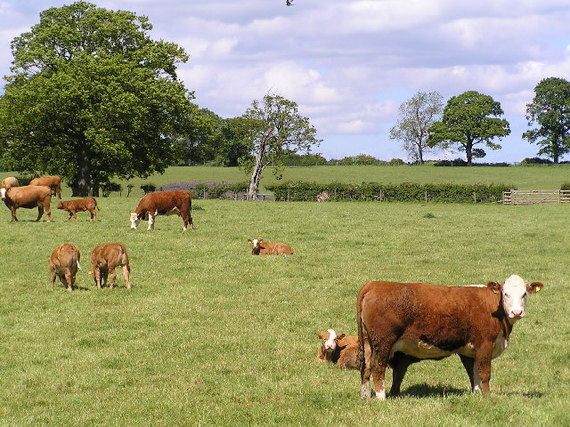 The global population of farm animals is growing twice as fast as the human population, creating "the other population crisis." How big is this problem? About 10 times as many animals as there are people in the world are now raised for food each year.

Controversy swirls around the subject of eating meat, with huge implications for human health, our environment, and animal welfare. We each make decisions about what we eat, day after day, for our entire lifetime. The cumulative consequences of our decisions are significant. The production of meat impacts the environment and animal welfare far more than the production of any other type of food does. Meat-eating habits also impact human health.

Meat includes "white meat" from poultry (and not seafood, in this discussion) and "red meat" from beef, veal, pork, lamb, and other four-legged animals. "Processed meat" is white or red meat that has been salted, cured, fermented, or smoked.

Globally, most meat is produced by factory farming. This involves confining large numbers of animals in cramped, often indoor, facilities. Farmers typically feed the animals grains and genetically modified corn and soy, which are grown with chemical fertilizers and pesticides. Farmers routinely dose their animals with artificial hormones and antibiotics to promote growth. The antibiotics additionally protect the animals from diseases that tend to thrive in the overcrowded and filthy conditions. The treatments with antibiotics also allow farmers to give the animals foods that their bodies were never adapted to eat -- a practice that often makes them sick.

There is a more-humane alternative to meat production, one that has been used since humans began raising livestock: Animals can be grass-fed, pasture-raised, and organically grown, without being exposed to genetically modified food, chemical fertilizers, pesticides, hormones, or antibiotics.

Most people are oblivious to the devastating environmental impacts of meat production on the global environment. Raising farm animals uses vast amounts of resources, including energy, three-quarters of the world's agricultural land, and one-third of our fresh water consumption. Forests are clear-cut for grazing and for growing food for the farm animals. Habitat loss driven by demand for meat is likely the leading cause of modern species extinctions. Farm animal production generates about 14 percent of the world's greenhouse gas emissions.

Industrial-style production of feed for farm animals uses more water and energy, generates more greenhouse gases, causes more water pollution, and kills more wildlife than organic production does. In addition, the cultivation of industrial feed erodes and degrades soil and results in dead zones at the mouths of rivers. To be fair, though, grass-fed and pasture-raised animals can degrade and erode soil.

According to the Center for Biological Diversity, wildlife lose when their needs conflict with those of grazing cattle. Some populations of grizzly bears and wolves, for example, have been driven extinct by the livestock industry. Ecologists fear that an additional 175 threatened or endangered species, such as the prairie dog, could be next.

The effects of manure are wiping out freshwater life throughout the world. This is less of a problem with grass-fed and pasture-raised animals, which roam over large areas of the land rather than being confined in small areas. Their manure is dispersed over the fields and becomes incorporated into the soil. 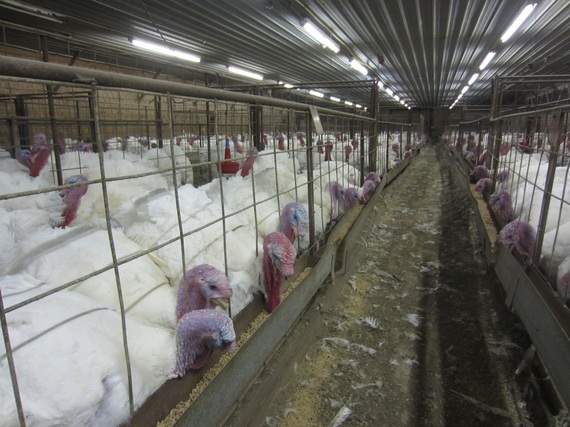 Turkeys at a factory farm in North Carolina
Photo Credit: Mercy for Animals

Industrial-style production torments farm animals, and some people consider it a crime. Instead, it is a crime in many states to take photographs of the tormented animals. Seven states have passed "ag-gag" laws. The other side is fighting back with state laws to end the most egregious factory-farming practices. Last year, it became illegal in California to sell eggs from hens kept in small "battery cages." A proposed Massachusetts ballot initiative has garnered the necessary citizen signatures to put a question on the November ballot that would ban the production and sale of eggs from hens and meat from pigs and calves kept in tight enclosures. Most of us close our eyes and ears to the maltreatment.

Before Will Harris (1), a beef producer in Georgia, switched from industrial to grass-fed methods, his 800 cows had been confined, fed corn and soy, and given antibiotics and hormones. "Here I was fighting nature every step of the way," he said. When he learned of consumers who wanted grass-fed beef, he ditched the drugs, hormones, corn, soy, pesticides, and chemical fertilizers and switched to pasture feed. He says he has only one metric for humane livestock production: "Can you pour yourself a glass of wine, sit back, and enjoy watching your animals?"

According to Andrew Weil, M.D., who "has arguably become America's best-known doctor," no one needs to eat meat to be healthy (2). But for those of us who do eat meat, whether or not it is a healthy habit depends on its quantity and type, the way the animal was raised, and how the meat is prepared.

Some studies link red meat consumption to cardiovascular disease, diabetes, and cancer; poultry consumption has not been linked to these diseases. However, the science is murky because the studies involve confounding factors. The subjects in the studies were eating factory-farmed red meat. The reported adverse health effects might have been due to the genetically modified feed, pesticides, hormones, or antibiotics administered to the factory-farmed animals and carried over onto the dinner plates of the human subjects. Pesticides have been implicated in increased risk of cardiovascular disease, diabetes, and cancer; so the animals' feed might be linked to these reported adverse effects. In that case, the study results are only applicable to factory-farmed meat. Similarly, the diseases reported in the studies might have been caused by other foods or lifestyle factors. Mark Hyman, M.D., international leader in the field of functional medicine and nine-time New York Times bestselling author, along with Weil, says that consumption of small amounts of quality organic meat is unlikely to be harmful. Amy Myers, M.D., a functional medicine physician specializing in autoimmune disease, states that choosing organic is particularly important for people with autoimmune disease or inflammatory conditions.

Some processed meats have well-documented health consequences, and they may be among the least healthy foods a person could possibly eat. Nitrites in some processed meats can convert to carcinogenic nitrosamines. Similarly, meats cooked at high temperatures can form polycyclic aromatic hydrocarbons and heterocyclic amines, which have been shown to cause cancer in laboratory animals.

On a macro level, consumption of meat harms the health of poor people, who go hungry because diverting grains to animals results in higher grain prices. And increased climate change caused by meat production comes with its own array of human health impacts.

Some people consider it unethical to eat meat altogether. For them, the answer is easy: Be a vegetarian. For the rest of us, the best approach for ourselves, our environment, and our fellow creatures may be to minimize meat consumption, especially red meat. Dr. Weil advises us to limit meat consumption to once or twice a week. Consider meat a condiment, not a main dish, suggests Dr. Hyman. He adds that meat should be cooked via slower, lower-temperature cooking methods such as baking, roasting, poaching, and stewing to avoid the formation of harmful chemicals.

Meat eaters should choose organic, pasture-raised, grass-fed and grass-finished, or wild meats. Food labels can misleading, so it may be necessary to ask questions at the store. For example, some labels say "grass-fed" when in fact the animal was initially grass-fed but later "grain-finished."

"We have a bizarre food system that's off the tracks in terms of both human health and sustainability," writes Walter Willett, chair of the Department of Nutrition at the Harvard T.H. Chan School of Public Health. We must navigate carefully to make healthy and environmentally and ethically sound food choices.