Should people eat less meat? Meat consumption isn't just something that impacts your health; it's also played a huge role in problematic deforestation. Animals raised for meat use very large amounts of land -- land to graze and land used to raise crops that feed livestock -- and it's increasingly coming from tropical forests, especially the Amazon.

A new report from the Union of Concerned Scientists calls meat "ecologically inefficient" and says people should eat less of it:

The inefficiency is particularly high for beef, which uses about three-fifths of the world’s agricultural land yet produces less than 5 percent of its protein and less than 2 percent of its calories. Beef production causes global warming through its effects on deforestation, both directly through pasture and indirectly through its use of feed and forage, and also because of the methane, a powerful heat-trapping gas, that comes from the stomachs and manure of cattle. 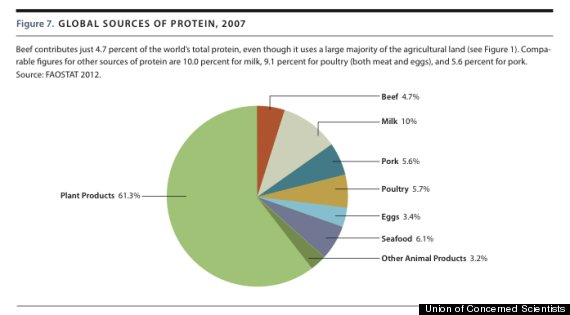 The paper suggests that a large-scale diet shift from beef to chicken would lessen the impact of deforestation and provide health benefits. It also suggestions other possible solutions: Increasing the productivity of livestock; expanding production to already-cleared land instead of forest; employing silvopastures, which combine forestry and grazing of domesticated animals in a way that's mutually beneficial; and reducing overall levels of meat consumption.

How can a single person help? The organization asks people to commit to buying deforestation-free meats, making an effort to change their diets and encouraging government officials to act on the issue.