It's a "protein factory in reverse!" I declared more than forty years ago in Diet for a Small Planet. In my outburst, I was targeting livestock--especially cattle. 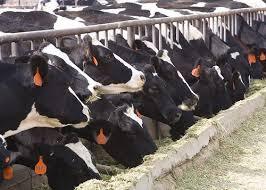 But little did I imagine in 1971 just how this "factory's" capacity to shrink our food supply would multiply. Today, worldwide, three-fourths of all agricultural land, including pasture, is used to produce animal products. But from all this, what do we get? Just 17 percent of our calories.

That's what I mean by "shrink."

To understand why humans get so little, consider livestock's "take": About half the world's calories from crops don't go to people. Instead they go primarily to feed livestock--which consume a third of the world's grain and 85 percent of soy--as well as into agrofuel production and other industrial purposes.

Let this sink in. Then note also that all livestock are not created equal in their capacity to shrink our food-resource potential. 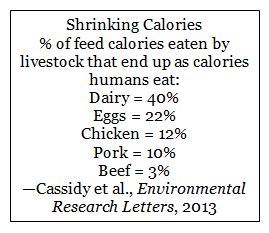 Beef wins the inefficiency prize: Of the calories that cattle eat in feed, humans get a measly 3 percent in the beef we eat. The following table reveals the big differences in the capacity of livestock to convert what they eat into calories we eat. Dairy, for example, is about thirteen times more efficient than beef, chicken about four times.

Given this extreme inefficiency, it shouldn't surprise us that livestock-centric U.S. agriculture--viewed by many as the pinnacle of efficiency--actually feeds fewer people per hectare, 5.4, than the less meat-focused Chinese, 8.4, or Indian, 5.9.

What a contrast to the presumption of America's great agricultural superiority!

But, of course, livestock were not always shrinking our food supply. Throughout human evolution animals have converted grass and other things we don't eat into high-grade protein we do eat--a big boon for humans. But over time we have remade livestock into nutrition disposals.

This we can change.

Worldwide, converting just half of crops fed to livestock into crops for humans could yield enough food for two billion people or be converted to carbon-storing forests.

Looking at the impact of what we eat from another angle, what would be the result of shifting modestly from beef to other animal foods?

Replacing even a fifth of the beef eaten globally with the more efficient pork or poultry would reduce the total agricultural area needed for all to eat in 2030 by about the same amount--a fifth--find scientists at Sweden's Chalmers University of Technology.

First note that nearly 70 percent of freshwater used by humans goes into irrigation, and much of it is used on crops and pasture for livestock--the big water guzzlers.

In drought-plagued California, for example, meat and dairy account for almost half of the state's entire water footprint. Nearly a fifth of its irrigation water goes to just one feed crop, alfalfa. So even as water scarcity worsens, every year 100 billion gallons of California water in the form of alfalfa go to China for meat production there.

In all, a pound of beef uses:

More than half of water used in the entire Colorado River basin, reaching six states including California, "is dedicated to feeding cattle and horses," reports the Pacific Institute. Or consider this: One could bathe daily for more than a month with the water used to produce a pound of beef!

Why would a smart species actively shrink its food supply and waste ever-more precious fresh water?

In short, I believe it's that we're caught in a spell.

Bedazzled by the notion of a "free market," we can't see that it's driven by a single, narrow rule--what brings highest return to existing wealth. Blinded by market dogma, waste and destruction follow as resource use follows market demand shaped by an ever wealthier minority. The expansion of grain-fed meat is but one example.

To break free, we can snap out of this spell and leave this waste and-destruction machine behind. Claiming our democracy from private power and shaping fair market rules, let's move toward plant-and-planet-centered diets rich in the dazzling taste variety of beans, lentils, nuts, seeds, whole grains, veggies, and fruits.

Diet is personal, so scolding is sure to fail. Let's instead invite others toward this saner world in which our nation efficiently uses precious resources in service of the human right to food.