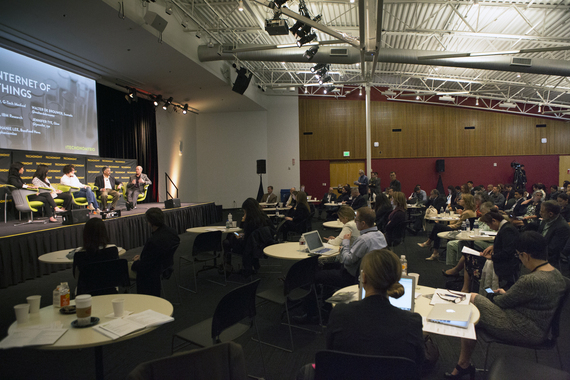 The over 200 people who descended on the Computer History Museum in the heart of Silicon Valley this March for the second annual Techonomy Bio event learned we were heading toward growing meat, cell phones and houses. They learned as well that we are in a renaissance of progress in human health. But they also heard thoughts on why we have more allergies and worries about how the public thinks about science.

The daylong program ranged from stem cells and bio-architecture to venture capital and public opinion about science, but the common thread was the intersection of progress in the dual realms of life science and information technology. As speakers noted throughout the day, the intersection of big data and biology has helped create a field ripe for breakthroughs.

Attendees included genomic veterans, tech entrepreneurs, biotech startup executives, investors, medical professionals and others. "I go to tons of biotech events, including those I organize myself, and usually I hang out a lot in the hallways. This is the first one I've gone to that I don't want to miss a minute of the program," said one industry veteran. There were certainly lots of conversations in the corridors of the museum's airy second floor, but virtually everyone at the event was there to learn something new. And most discovered there were things happening in life sciences they didn't know were possible. Punctuating the program throughout the day, executives from startups funded by Peter Thiel's Breakout Labs gave short, fast-paced talks about a range of efforts: growing bone from stem cells, linking Alzheimer's disease to bacterial infection, developing a patch to monitor the human gut and transmit results to a smartphone and quantifying stress for healthier living.

A key theme of the day was that a shift from artisan to factory scale is taking place across many areas in life sciences. The opening panel kicked off with Drew Endy's bold proclamation that synthetic biologists will literally be able to grow cell phones within two or three decades. Things got only more audacious from there. Other examples of the shift included bio-based production of physical bricks (with help from bacteria or mushrooms) and other materials for sustainable architecture, as well as lab-created meat and leather products to eliminate the need to kill animals. In the closing session, Sue Desmond-Hellmann from the Gates Foundation told Marc Benioff that bespoke therapies may seem out of reach, but that this kind of targeted medicine is indeed possible in the not-too-distant future. We may have customized medicine at scale, around the world.

The flip side of the optimistic theme of endless possibility is the need to better understand and to recognize our responsibility for changes we introduce to the environment, humans or other species. Juan Enriquez, author of a new book entitled "Evolving Ourselves," told Techonomy's David Kirkpatrick that we have created a parallel evolutionary system in which our interests often override natural selection. His examples ranged from IVF babies to antibiotic-laden animals. We must work to better understand what may result from these actions, particularly over the long term and take steps to ameliorate unintended negative consequences, he said. We get longer lives, but we also get developments like huge increases in people with allergies. A separate session included journalists and media leaders exploring the complex and increasingly fraught interaction between scientists and the public.

Another topic that wove through several sessions was consumer-driven health. Several speakers talked about digital health and the critical need for developers to improve how results from such devices can be interpreted and shared with physicians. Other speakers drove home the point that healthcare needs better models to obtain consent and to manage sharing of increasingly complex data like genetic information. But during audience Q&A, several attendees from traditional healthcare organizations emphasized that so far physicians see little reason to trust or use consumer-generated information from health apps or wearable devices.

Here's a quick glimpse of Techonomy Bio moments that had attendees buzzing most: