Neal Barnard, Colleen Patrick-Goudreau, T. Colin Campbell, Caldwell Esselstyn and Chef AJ will all be aboard Holistic Holiday at Sea when it sets sail this weekend. So will 1,800 other people. Alas, I will not be among them. It's sold out.

Now in its twelfth year, Holistic Holiday at Sea is a weeklong vegan cruise where you get to interact with stars of plant-based health, fitness and cuisine, travel the Caribbean -- very appealing during this miserable winter -- and, as with all cruises, eat great food. These meals just happens to be plant-based.

Many presenters have been part of it year after year, including Dr. Barnard, head of Physicians Committee for Responsible Medicine. Not only has he seen it grow -- last year, I was one of a mere 1,500 attendees -- he's seen it grow in reach. "There are a great many new folks each year, including a large number of doctors and health professionals," he says "And every year, the chefs outdo themselves. It all just keeps getting better and better."


Chef AJ, new to the cruise last year, is back this year as one of the keynote speakers. "I'm excited about returning," she says. "I learned so much from all of the amazing speakers and got to spend a week in paradise with like-minded people, made so many new friends while eating delicious food and experiencing a dream vacation."

Many attendees say the same. One woman I met last year was back for the sixth time. "I look forward to it all year long," she told me. "I feel so light when I'm here."

It's a lightness with lasting power. "Every person who experiences an event like this takes home new information, new tastes, and new motivation that, in turn, will influence many others," says Barnard. "It has a tremendous ripple effect of good health."

That's just what Sandy Pukel wanted when he launched Holistic Holiday at Sea a dozen years ago. Pukel spearheaded a Miami macrobiotic center and ran the natural food mecca Oak Feed long before the likes of Whole Foods. He taught vegetarian cooking, he promoted wellness. But he found that unless you keep enforcing good habits, it's easy to slip back to old not-so-healthful ways. Voila, the vegan cruise idea -- providing a week's worth of fun and education for the guests while holding them captive long enough for healing habits to take hold and stick.

Full disclosure: I met Sandy Pukel several years ago when I did a story about him for the Miami Herald. I have helped consult on shaping the cruise menu. I attended Holistic Holiday at Sea last year and had a blast. I remain his fan, all the more so, having worked on one little part of an event with a bazillion moving parts. So what makes Pukel keep doing it? "My energy level is fueled when I see the thousand of people whose lives are touched by sharing the week with us," he says.

Here's hoping when Holistic Holiday at Sea sails next year, I'm on board and so are you. "We are exploring Europe, Alaska and ports beyond," says Pukel. "There are no borders for spreading the word on health and happiness." 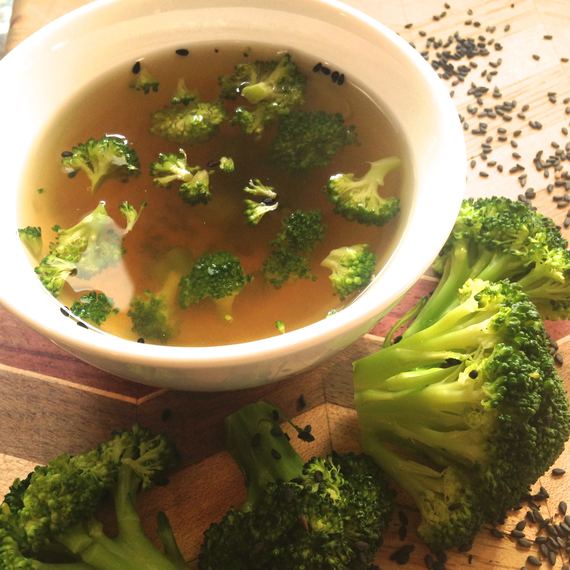 Cruise Chef Mark Hanna kindly provided this recipe, which he serves to cruise guests. He kindly cut down portions from a thousand to an amount more manageable for those of us making it at home.

Add broccoli florets and wakame flakes and simmer for another 5 minutes.

Ladle out 1 cup of soup liquid into a small bowl. Stir in miso and let it dissolve.

Remove from heat and let stand covered for 1 minute.

Variation: Add 1 teaspoon toasted sesame oil along with the miso for a richer sesame taste.