Get cozy, it's story time, and the tale is Jason and the Argonauts, your classic Greek myth.

Jason, a nice enough guy, was promised the kingdom of Iolcus if he produced the Golden Fleece, a magical ram's skin bestowing all kinds of good luck. For his quest, he built his ship, the mighty Argo and manned it with 50 stout-hearted, able-bodied men. Really able-bodied. They had to row the damn thing, it didn't run on gasoline.

Off they went, in search of the Golden Fleece, banishing Harpies and having other adventures along the way. Then they came to land, possibly Africa, so big they couldn't get around it. This presented a significant obstacle.

Jason slept on it. He dreamed three nymphs came to him and said he and his men had to pay back their mother, doing for her what she'd done for them. The problem was, he had no idea what it meant. One of the Argonauts explained it was a metaphor. The mother is the Argo. "She has carried us. Now we must carry her even as she carried us. With untiring shoulder, we must bear Argo across this great desert."

I've been thinking about carrying the mother in terms of another metaphor -- Earth. We're going to have to work together to carry the Earth or at least clean it up and make up for what we've done to her. I'm really, really hoping this is possible, despite evidence to the contrary. Often it seems like there's a line in the desert sand between meat-eaters and plant-based people, Republicans and Democrats. We rarely agree with each other, but we're all on the good ship planet Earth together. And it's not looking too sturdy.

Jason and the Argonauts is a myth. Here in Realityville, just this week we've had deadly flooding in Paris and in Texas. Meanwhile, California continues to face ongoing debilitating drought. As far as omens of catastrophes go, these are fairly epic. They will impact our economy, our health, our communities -- all of us. It's a domino effect of woe we're all going to feel in ways we can't wrap our brains around yet.

Forgive me for sounding like Cassandra, that doomsday prophetess of another Greek myth.

We can deny climate change, but that isn't going to solve the problem. The solution is going to have to come from us, all of us. Or what?

Well, let's put it this way. Jason got the Golden Fleece, but was so ruthless, he managed to piss off people, gods and his metaphorical mother. Jason didn't honor the Argo, he didn't take care of it and it lay rotting -- and plotting -- in the sun. One day, Jason passed by and a piece of the prow fell off and beaned him on the head, killing him.

We don't want the same fate. But we've been ruthless and greedy and will most likely continue to be. Most of us aren't going to row to work, give up our cars or even convert to clean energy any time soon. But rather than further risking the Earth's wrath, one thing we can all do -- herbivores and omnivores alike -- is buy and eat food that's local and in season. It's lower in carbon than food freighted in from elsewhere, unless you've got an Argonaut or two rowing it in for you. With summer's abundance, local and seasonal eating's not just easy, it's delicious.

The Earth has put up with an awful lot from us. We must all pull together and return the favor. Or else. Call me Cassandra. Just don't say I didn't warn ya. 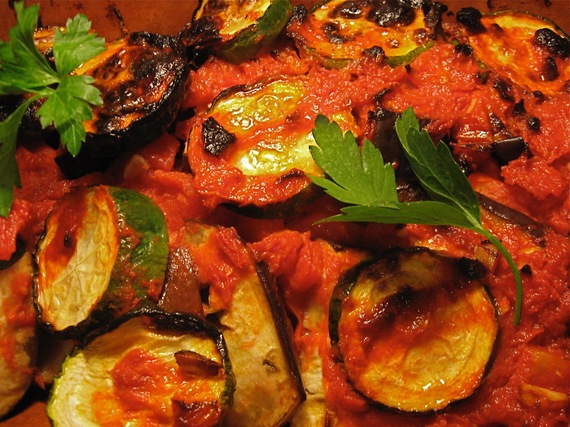 It's No Myth Seasonal Summer Briam

To honor Jason and the Argonauts and seasonal eats, here's a briam -- a Greek casserole of seasonal summer produce. Many traditional recipes are oil guzzlers (fancy that). This has less oil but loads of flavor from the veggies themselves. Fresh produce and slow simmering do the work for you.

Crusty on top, juicy on the bottom, it's good over brown rice, quinoa or with crusty bread for soaking up sauce. Serve with a Greek -- or any -- salad.

In a small bowl, mix together diced tomatoes, tomato paste, 1 tablespoon of olive oil, chopped garlic, pinch of cinnamon and the juice of 1 lemon.

In a deep casserole or pie pan, arrange potato slices in a single layer. Spoon roughly 1/3 cup of the tomato sauce on top. It will not cover the potato slices entirely. Don't worry.

Drizzle with a tablespoon of olive oil, season with sea salt and pepper and bake for 30 minutes.

Top with chopped parsley and oregano.

A version of this Meatless Monday originally posted on July 16, 2010. More things soulful on soulfulvegan.com.