Today is Columbus Day, when we mark the date when Christopher Columbus came to America. He did not "discover" it, he got it wrong -- he thought he was somewhere else. And he was less interested in discovery than in sacking new lands for riches. In return, he and his men inadvertently brought the germs of Spain to the Native Americans, who, never having been exposed to them, died. Oh, don't blame Columbus. If it wasn't him, it would have been some other guy. This is the way we're wired. 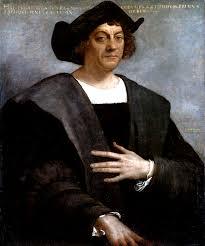 Here we are 522 years later -- like Columbus, in hoping to find riches in the new world, we've plundered it. The earth is our home and we've stripped it of resources. We're living like the dotty heiresses in Grey Gardens, holed up in a mansion in serious disrepair. Just how serious is laid out in the World Wide Fund for Nature's new study, the Living Planet Report 2014.

The most shocking and saddening finding? The population of "more than 10,000 representative species of mammals, birds, reptiles, amphibians and fish, has declined by 52 per cent since 1970." We've lost more than half our wildlife since the Beatles broke up. As much as we love music, we can't tune out this loss of habitat and what it portends. "These are the living forms that constitute the fabric of the ecosystems which sustain life on Earth - and the barometer of what we are doing to our own planet, our only home," writes WWF International Director General Marco Lambertini. "We ignore their decline at our peril."

What he isn't saying T.S. Eliot did -- "This is the death of earth." Eliot could be relied on to be a downer. Lambertini isn't interested in despair, but in answers. "We are all connected - and collectively, we have the potential to create the solutions that will safeguard the future of this, our one and only planet."

The World Wide Fund report is a little sketchy on what those solutions are, but I think it starts with connection. Food connects us, whoever we are, wherever we are. As M.F.K. Fisher said, "First we eat, then we do everything else." Our health, the health of the environment and the joy of sharing the foods of the earth are all bound up together. Without our health,we don't have the energy to heal the planet. Without earth, we don't have anything.

One thing we can do to protect the habitat we have is not eat it. Or participate in a food system that endangers our habitat, our home and us. Livestock production is one of the largest contributor to greenhouse gas emissions, deforestation and fresh water use. We're facing a drought that's already impacted the amount of food we grow. No study ever has linked eating meat to health benefits for you and certainly doesn't do the animals any favors.

With all the bad news out there, it's empowering, inspiring, really, that one simple choice, which we make every day when we eat, can have such a profound impact. Moving to a plant-based diet affects the environment, our health, our karma, our dharma, it affects the whole world. And it's an action every one of us has the power to take.

Lambertini says, "We need leadership for change." Government leadership would be nice, big business support wouldn't hurt. But we can't wait That means us -- the only animal not decreasing in number. There are over 7.2 billion of us now, with another 2 billion joining our table by 2050. We can all be part of what Lambertini calls "a new global movement" creating a sustainable, living planet. It can start as simply as leaving meat off your plate.

The earth seemed vast in the days of Columbus, the possibilities limitless. On this Columbus Day more than 500 years on, there are no new lands left to discover and limits loom everywhere. The solution, the connection must come from us. As Eliot wrote,

We shall not cease from exploration
And the end of all our exploring
Will be to arrive where we started
And know the place for the first time. 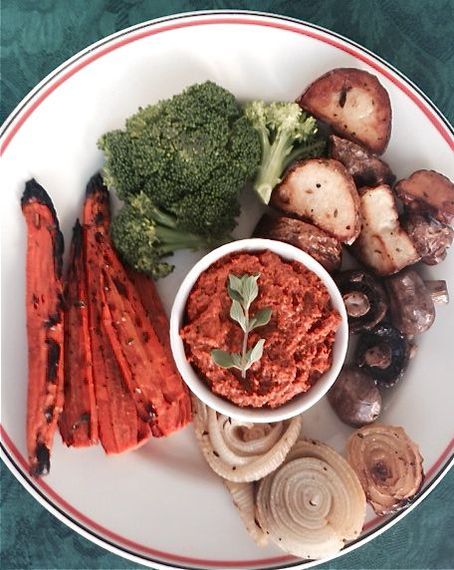 
In honor of Columbus, here's a recipe for gorgeous, garlicky and gutsy romesco, a nut and pepper-based sauce from Catalonia, Spain. Fabulous on any kind of vegetable and pretty great, too, slathered on crusty bread. Can be made a few days in advance and keeps covered and chilled. Flavors improve over time.

Preheat oven to 375 degrees. Pour nuts onto a small, rimmed baking sheet and toast until they darken slightly and smell buttery, about 10 minutes. Set aside to cool.

Drop baguette slice, garlic, chili and almonds into a food processor or blender. Process for a minute or so, until it forms a thick paste. Add the tomatoes, vinegar, paprika and olive oil. Process until smooth and creamy. The sauce should be of a hummus-like consistency, thick but not gluey. Add a tablespoon or two of warm water, if mixture seems too dry. Season with sea salt and freshly ground pepper to taste.