Rosh Hashanah, the Jewish New Year, starts Sunday at sundown. So what do you want for this new year? Set your intention now. Rosh Hashanah offers "the most positive time to make a change in your life," says Jeffrey Cohan, executive director of Jewish Veg.

Rosh Hashanah is when Cohan and his wife began their own "plant based journey." Attending temple services a few years ago, they listened as someone read from Genesis 1:29, the section where God tells Adam and Eve, "Behold, I have given you every plant yielding seed that is on the face of all the earth, and every tree with seed in its fruit. You shall have them for food." "My wife and I looked at each other and said, 'We're supposed to be vegetarian,'" says Cohan.

The two gave up meat on the spot and ultimately went vegan. Having grown up in a household where meat was served "at every meal," Cohan found going meatless was surprisingly easy and "totally transformative." He not only felt better, it resonated with him spiritually.

Cohan had been raised Jewish, but vaguely so, in a secular family. "I was struggling with Jewish liturgy. My spirituality hadn't developed yet, the High Holidays were tedious for me." Jewish Veg's executive director since 2012, Cohan says, "The amazing thing about going vegan is it changes the way you interact with people and animals. We truly see the world in a different, beautiful way."

Many of Jewish Veg's members first approach giving up meat to boost their health. They've got a great resource with the nonprofit's advisers including Dr. Joel Kahn and Nutrition Facts' Dr. Michael Greger. Increasingly, though, the interest is in animal rights, the environment and of course, ethics, wanting to live and eat in sync with Judaism's tenets. Jewish Veg, which turned 40 last fall, provides information and support for whatever's driving your passion, whether you're looking for a Jewish vegan partner or a veganized version of a cherished holiday recipe.

"We don't have to give up any of our Jewish favorites," says Cohan. "You can have brisket, but it doesn't have to be made animal flesh. Do it using seitan. You've got the same sauce, same onions, it will be just as delicious, you'll feel better about it and you'll be healthy."

I'd add the real special sauce is us. We knot food and feelings together all the time. What we want -- especially at the holidays -- is love, celebration, togetherness, a sense that everything's going to be all right. The key is choosing how to best express it. It doesn't come from brisket. It comes from us. That's what we bring to the table. A meal that causes no harm to others only furthers that love.

"Nobody supports cruelty to animals. People want to be healthier, too," says Cohan. "One of the beautiful things about being vegan is it eliminates" any conflict between "our values and our actions." *

Ready to make a change? Now's the time. "Rosh Hashanah is the most opportune time for action, a prime opportunity to engage in some soul-searching and to look at everything we're doing," says Cohan. "By starting the new year with a vegan meal, you're aligning yourself with the highest ideals of the Jewish religion, starting the year in the most compassionate way possible." 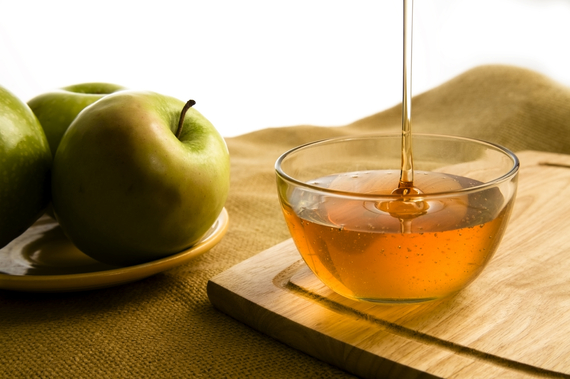 There are seven sacred foods in Judaism. None of them are brisket. All are vegan, even honey, which here comes from dates and not from bees.

This fruit purée has the thick consistency of apple butter. Spread it on toast, dot it on oatmeal or whole grain pancakes, and by all means, dip apples in it at Rosh Hashanah for a new spin on an old tradition.

In a small saucepan, bring water to boil. Add dates and stir. Cover the pot and turn off the heat. Leave the pot on the burner for 30 minutes.

Pour the dates and water or tea into a food processor and process for 2 minutes, or until smooth and saucy. Add lemon juice and optional orange flower water. Process again for another minute. Keeps covered and refrigerated for several months.

The original version of this post first ran on September 14, 2015.