"The world is all messed up," observed Martin Luther King Jr. on April 1968, the night before he was killed. It still is messed up. It's impossible to undo the pain caused by a single act of violence, let alone last week's terrorist attacks in Paris. But as we honor King on his birthday, we can seize this moment as an opportunity to rise, to come together. 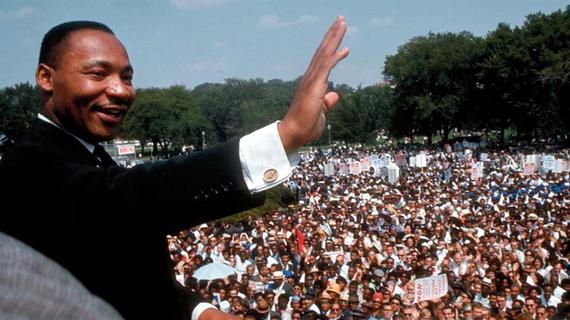 Our messed-up world is as riven by poverty, racism and militarism -- the three evils as King called them -- as it was in the 1960s, maybe more so. King believed in combatting them not with evil, not with force, but with nonviolence. Another word for this, in another language, is ahimsa. Buddhists, Hindu, yogis and vegans translate this term as nonviolence and as unconditional universal love. It's easy to talk about -- I mean, who's really against love? It's the doing that's hard to pull off. To the hardcore ahimsa practitioner, the life of an animal that becomes your dinner matters just as much as the life of a child, evil thoughts can harm as much as physical weapons. That sets the bar so high for most of us, we can't even think where to begin.

Begin with a loaf of bread. Yeah, bread -- a little yeast, a little water and some flour. Add some heat and time, and from a sort of mud, you get a sweet-smelling, sustaining loaf that feeds many and comes at the cost of no creature's life, something far greater than the sum of its parts. It's an act of creation, not destruction, an everyday miracle at a time when miracles seem thin on the ground.

The Hebrew word for blessing or prayer is baruch. In Arabic, it is baraka. In Morocco, baraka is its own kind of blessing. It is showing gratitude for the food you have by sharing it. It is creating abundance. It is the power to multiply food. This kind of blessing, the law of increase, requires a practical magic, of making the most of what you have, even when it's something as simple as a loaf of bread. In my book, "Feeding the Hungry Ghost," I write, "Breaking bread together is an ancient rite of welcome. It is also a revolutionary act. Ending all wars doesn't take another war. It takes a communal meal."

Every meal -- any meal, even a loaf of bread -- can offer the opportunity for deeper connection, for a communion for people of every faith or of no particular faith at all. Bread is a food shared by every culture. In Morocco, they say, "By bread and salt, we are united."

Combine a few simple ingredients, and bread dough rises. Take it in. Let it inspire us to choose light when darkness threatens to consume us, to "rise up tonight with a greater readiness," as King said, not against each other, but together. 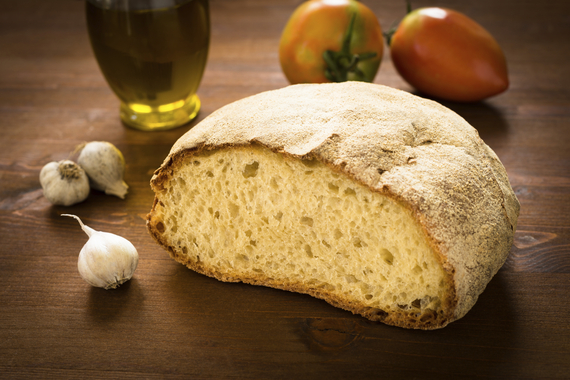 A Simple Loaf of Bread

Makes 1 small loaf, or about 6 servings.

In a saucepan, gently heat the soy milk till lukewarm. Add the cider vinegar. Mixture will curdle slightly. Do not panic.

Slowly add soy milk to the flour. Mix using a food processor or standing mixer, or stir briskly with a large wooden spoon. Pour in warm water and continue mixing until batter is thick. If it feels sticky, work in a few tablespoons more flour. Knead until dough is slightly elastic.

Sprinkle corn meal on a baking sheet. Turn bread dough onto baking sheet and shape into a 7-inch round.

Cover with parchment or a kitchen towel and set aside to rise for 2 hours or until the dough does not spring back when gently poked.

Brush bread with oil and sprinkle sea salt and optional seeds on top. Cover again and let rise for another 2 hours.

Prick the top of the bread lightly with a fork. Place the baking sheet of bread on the middle rack and bake for 15 minutes. Reduce heat to 325 and continue baking for another 25 to 30 minutes, or until loaf is golden and sounds hollow when gently tapped.