Welcome to the last day of of Hanukkah, an eight-day holiday which commemorates the time in Jerusalem a couple thousand years ago when the Brothers Maccabee led the Jews to take their temple back from the enemy, beat back oppressors and stuff like that. And then there's the miracle. The whole Hanukkah megillah, if you will, is that while the Jews only had a day's worth of lamp oil for the temple light, through some miracle, it lasted eight -- a miracle of sustainability.

We've had our own miracle this weekend, with the world's leaders coming together to create the Paris climate accord. We all agree we must take action to save the planet and that we've all had a role in the damage that's been done, What matters now is how we proceed. Even as world leaders hashed out an agreement, all over the world, we're busy pumping our dwindling oil supply into beef production. According to Stanford University study, global meat production has tripled in the past three decades, and will keep the pace going in order to keep up with mankind's insatiable desire to eat animals.

Back in the Maccabees' day, the food that fed the world wasn't meat, it was barley. A complex carb before anyone knew or cared about such things, barley goes back some 6,000 years, It's one of our first cultivated crops and one of Judaism's seven sacred foods.

Sometimes called the poor man's wheat, barley is cheap and easy to grow. An acre's yield of barley feeds a lot more people than an acre feedlot for cattle, is kinder to the environment than raising livestock, and more humane besides. It allows us to feed ourselves without eating up our resources. It allows us to be sustainable. And it makes us look good as a civilization. In "Near a Thousand Tables," a cultural history of food, author Felipe Fernandez-Armesto calls the cultivation of barley and other grains "among the most spectacular achievements of humankind." Not bad.It's hard to imagine future food historians will say the same thing about the way we produce food now.

There's no putting the genii back in the bottle, there's no going back in time to an all-agrarian world. But returning to growing more sustainable food, like barley, wouldn't hurt. Usually labelled pearled barley -- barley with part of its fibrous hull stripped away -- it's in your market along with the dried beans and grains. A pound of barley costs just a buck or two, has an almost meaty chew, a subtly nutty taste and fills the belly -- lots of bellies, actually.

Barley's heartier than rice, but just as versatile and its texture gives it a certain stylishness. Russians traditionally serve mushroom barley soup at Hanukkah. It also makes a rich risotto, works as a pilaf with your favorite vegetables or as a grainy main course. You can even bake with it. Barley flour (ground barley) makes for a denser loaf than wheat flour, but barley bread's been around since the Maccabees -- and they did all right.

I'm not saying swapping barley for beef is going to save the world. But it might be one of a number of actions that leads us back to a more sustainable path. Besides, barley has a way of bringing everyone together -- it's what beer is made from, after all. It's a big player in the Old Testament's Book of Ruth, and in the New Testament, barley feeds 5,000 people in John 6. In these divisive days, it's a grain even Jews and Christians can agree on. That alone makes barley a natural miracle. 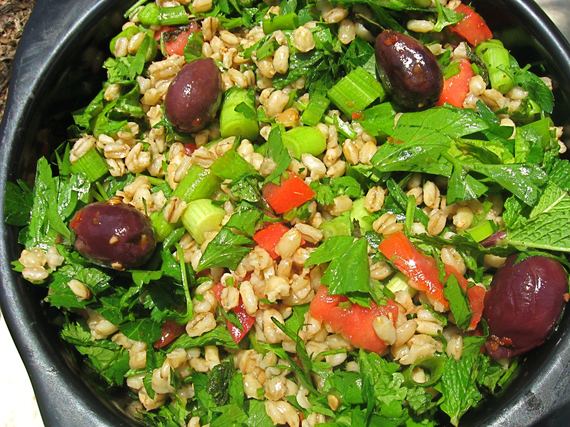 Barley is filling and comforting besides, with a chewy, density even carnivores can sink their teeth into. Here the goodness of the grain gets played up with tapenade, a sexy black olive paste.

In a large pot, bring broth or water to boil over high heat. Add barley and cover, reduce heat to simmer. Cook for 45 minutes, until barley is tender and most liquid is absorbed.

Meanwhile, preheat oven to 425 degrees. Chop onion and garlic, then spread them on rimmed baking sheet or in a roasting pan. Add tomatoes. Mix in 2 tablespoons of the tapenade and roast for 30 minutes. Give the vegetables an occasional stir. Remove sheet from oven.

Add spinach gently add handfuls of spinach to barley, so that it wilts. Add tomato and onions, vegetables to barley and stir in remaining tapenade and wine.

An earlier version of this post originally ran on December 6, 2010. More about soulfulness and sustainability at ellen-ink.com