Three dishes, two competing South Beach steak chefs, one hour, no meat -- this was the challenge at last week's Culinary Clash at Whole Foods in Coral Gables, Florida. At the top of the hour, the emcee revealed the secret ingredient -- wild mushrooms -- and the surprise rule -- meat was off the menu.

Meat Market's Sean Brasel looked pissed. Naked Taco chef and Hell's Kitchen alum Ralph Pagano requested -- and was granted -- a beer. The clock was ticking and our chefs were off. Bad start -- Brasel shredded his finger on a mandoline, Pagano's gas cookstove was dead.

I'd have bandaged Brasel's finger and shot a fresh can of propane into Pagano's cookstove, but it wasn't up to me. I was there not to abet but to observe. And eat. I was one of three judges. Rarely do I get this kind of job perk.

I was the lone vegan among the judges -- and the chefs and the audience. I write about going meatless not just on Meatless Monday but every day of the week. Meatlessness is my job, it's my life and it's certainly my choice. So I wanted to see what these chefs came up with, working outside their comfort zone.

Chefs are used to pressure. And Pagano knows what people like -- big. It's what he likes, too. He scoped out the Whole Foods kitchen and was off and running. "As soon as I saw the pizza oven, I knew," he says, and turned out a robust sage-scented goat-cheesy mushroom pizza. 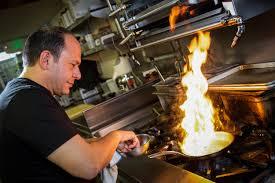 Brasel went edgier, roasting tofu and portobellos and topping them with a stylish roasted chili and lemon relish. The preparation is one of Brasel's favorites for steak, so he had it in his head. The rest "I had to punt," he says. "It was a challenge -- that's what was fun about it."

Fun. Now there's a word I didn't expect to hear. Anthony Bourdain has called vegetarians "a persistent irritant to any chef worth a damn. . . the enemy of everything good and decent in the human spirit." Happily, other chefs worth a damn don't feel the same way.

"We're in the hospitality business," says Brasel. He feels it's his job to make food "that excites people." Meat is optional -- even personally in Brasel's case. "I try to eat meatless one day a week to clean out my body." 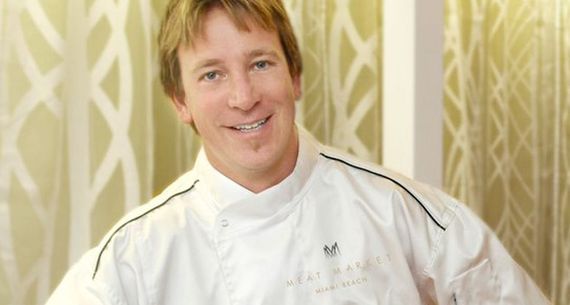 Both chefs agree going meatless has environmental benefits, too, including "a smaller carbon footprint," says Pagano "And the truth is, it can be more difficult to cook with [animal] protein than without it." Then the chef beams. "But it's macho to cook meat."

Oh, Ralph, it's not the size of your cleaver that matters.

"People are concerned about where their food comes from," says Brasel. "They're taking greater care about what they eat."

Of course it still needs to taste good. Speaking of which, both chefs' mushroom desserts were earnest efforts but also-rans. Nice try, guys.

For novice cooks making a meatless meal, both pros advise going for produce at its succulent, seasonal peak and adding the flavors that excite you.

"Concentrate on what you like, then incorporate it," says Brasel.

"Take fun ingredients, treat them well, and you're in business," says Pagano.

So who won the meatless Culinary Clash? I'd say everybody did. 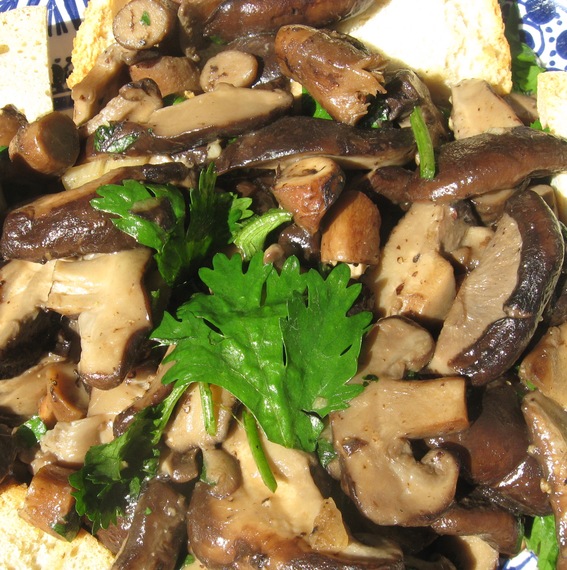 Not as elaborate as Sean Brasel's fab creation, but impressive and easy. Relish is good on any vegetable or dolloped on whole grain flatbread.

Place tofu and mushrooms in a large casserole or on a rimmed baking sheet. Squeeze juice of 1 lemon over mushrooms and tofu. Drizzle 1 tablespoon olive oil over all.

Slice lemon in half lengthwise. Remove any visible seeds. Place both sides cut side down in a separate casserole. Add 1/2 jalapeno, sliced lengthwise. Scatter sliced onions around pan. Drizzle with an additional tablespoon olive oil.

Roast both pans for 20 minutes. Remove from oven and allow to cool slightly.

Chop lemon, jalapeno and onions coarsely, or pulse in a food processor. Add cilantro and continue chopping. Mixture should be chunky.

Slice tofu into 4 to 6 pieces.

Arrange greens on separate plates or a serving platter.

Top with sliced tofu and mushrooms. Garnish with grape tomatoes and radishes.
Spoon relish over all.