"We're creating irreversibility in areas of global depletion. If we're going to make it as a civilization or species, we have to change," says Dr. Richard Oppenlander. "To move the world in the direction that's truly more sustainable, the most efficient way possible means adopting fully organic, plant-based agricultural systems."

Oppenlander (pronounced OPENlander, as in open your eyes) admits, "I take a hard line," but he has reason. His exhaustively researched books "Food Choice and Sustainability" and "Comfortably Unaware" document seven areas of global depletion. "My goal was to create a platform, a timeline," he says. And time is running out. "Tipping points have already been reached. We have 50 to 60 years of top soil use, and with climate change, we have a 50 to 75 year range before things become unbearable." 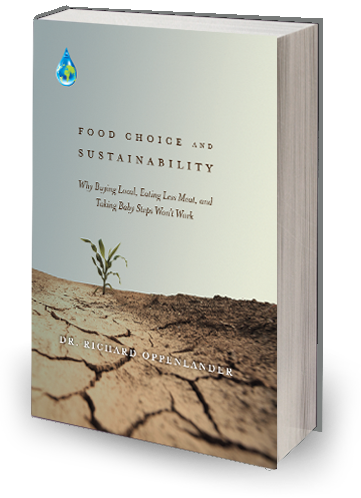 Deforestation, climate change, fresh water shortage and other environmental arenas on the brink of global depletion share a common cause -- "our food choice, specifically animal agriculture. Even if we moved to a fully plant-based diet today, 30 percent of the oceans are more acidic than they've been in historical times. These figures were not created by me. They came from very respected organizations, scientific organizations. I'm just the messenger."

It's a message not many want to hear, and one Oppenlander's been trying to deliver for the better part of 40 years. He and his message are reaching a wider audience at last in the documentary "Cowspiracy."

Oppenlander became uncomfortably aware of the connection between true sustainability and food choice back in dental school (dentistry's his day job, activism's his calling). Doing research, he saw "on a real cellular level what was accomplished in a negative or positive sense through nutrient intake." The nutrients in a plant-based diet could heal you. Other foods would trigger cancer cell growth. Oppenheimer went vegan.

He began to understand the issue on an ever-larger scale. Thanks to his wife Jill, he realized how food choice feeds animal abuse. And as awareness grew about the enormity of climate change, he saw how adopting a vegan diet could pull the world back from the brink of global depletion.

"We look to our leaders for change. I thought someone else was managing this for us," he says. If only. "But there are so many systems entrenched right now, powerful organizations -- the meat, dairy and fishing industries. All of them form a difficult nucleus to break apart to create change, to allow change to occur."

So he started on his own, sharing his concerns about our food choices and their global implications with friends, his community. He's been taking his message to a growing audience, and hopes that "Cowspiracy" generates not just uncomfortable awareness, but action and answers. "Awareness is increasing, programs are being created, businesses are incorporating this more, but it's not being made quick enough to push us on the correct timeline to become sustainable."

Oppenlander still believes it's up to national if not global policymakers to pave the way for real change. "They can't just put this on the back burner."

You can't either. Meatless Monday helps, but Oppenlander doesn't want people crapping out on the planet the other six days of the week. We don't have that kind of time. "It's hard to change our food preferences," Oppenlander concedes. "But we have to start looking beyond self. We're not the only thing that lives on earth."

True sustainability, a vegan diet and seasonal, organic produce doesn't have to be uncomfortable. It's a delicious combination worth celebrating

July is national blueberry month, but you can keep the party going all year. Blueberries freeze beautifully.

Pour berries into a flat, rimmed container, such as a baking sheet, and spread in a single layer. Freeze for several hours or overnight. When berries are frozen solid, store them in an airtight container or resealable bag.

Toss frozen berries into the blender for smoothies for a burst of juicy blue greatness. Or mix them into this muffin batter.

In a separate bowl, mix together soy milk with cider vinegar. Mixture will clabber, forming the tangy vegan equivalent of buttermilk. Stir in orange juice and grapeseed oil. Whisk everything together lightly.

Pour wet ingredients into the flour mixture and stir quickly, with a light hand, until just combined. Pour in blueberries and give a final stir or two.

Fill muffin cups 2/3 full of batter. Bake for 20 minutes, or until they puff and turn golden and spring back to the touch.

Let muffins cool in their cups 15 minutes or so before transferring to a wire rack (or to your table for breakfast).