From small things, big things one day come. Take Esther the Wonder Pig. She was a wee 4 pounds when she found her way into the hearts of Steve and Derek, her human companions. Esther's now closing in on 700 pounds of love. There've been other big changes -- Steve and Derek have become vegan and Esther herself has become a vegan spokeswine extraordinaire. Along with other sizeable star David Carter, 300 pounds of vegan NFL player, she's throwing her weight behind US VegWeek.

Sponsored by the animal rights advocacy nonprofit Compassion Over Killing, US VegWeek, like Esther the Wonder Pig, started small. 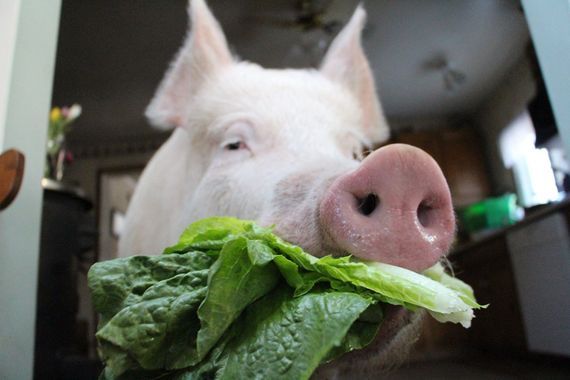 Back in 2009, Maryland Senator Jamie Raskin pledged to go meatless for a week to help the environment. Raskin's kept his meatless pledge long beyond a week. He's now another of US VegWeek's celebs calling on people to pledge to go veg for US VegWeek. "That one-week pledge led to this commitment. It started a celebration," recalls Compassion Over Killing director Erica Meier. Though weighing considerably less than Esther, Raskin "really is supporting this full throttle," Meier says. "He is really touting the benefits of a meatless diet -- he feels so much more energetic and healthier and active. His support is bringing other folks on board."

Take the pledge to go veg for US VegWeek and score freebies galore including plant-based recipes, restaurant discounts and coupons for vegan delectables. You'll receive daily cheering and check-ins from Compassion Over Killing throughout US VegWeek and beyond, so they can gauge "how your one-week pledge may have impacted dietary choices further down the line." Big things could come of it.

Meier's a case in point. She grew up eating meat. No surprise -- her family had a meat-packing business. But once Meier made the connection between what she ate and the animals she loved, "it all came together for me in one day." She become an instant vegetarian and an impassioned animal advocate, enough so that her father "embraced it." Now a vegan ice cream fanatic, "he was very open-minded to my interests to help animals." Since becoming the nonprofit's executive director in 2005, Meier's convinced many others to do the same.

Seven thousand people pledged to go meatless for US Veg Week in 2014, and armed with the support of Raskin, Carter, Esther and others, Meier's hoping to make that number closer to 10,000 this year. "I was very optimistic when I started, but I feel so much more optimism right now," she says. "There's a lot of energy in seeing other people become part of the animal protection movement, in seeing a growing interest in audiences interested in learning more about how they too, can shift to a more plant-based diet." Senator Raskin's not the only person on Capitol Hill to cheer about the positive impacts of a plant-based diet.

Maybe it takes a politico to convince you to pledge to go veg for US VegWeek. Maybe it's a pro athlete. Or a pig. "We want to reach people where they're at," says Meier. "We're in this for the animals, to make the world a better, kinder place." This big change starts with one small, doable act. "We can make a difference every day by leaving animals off our plates." Just ask Esther. 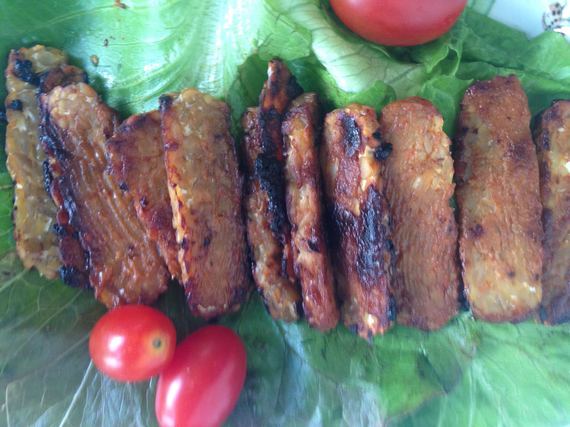 No it is not exactly bacon, but it's smoky, sticky, high in protein and animal-friendly. Enjoy and still look Esther the Wonder Pig in the eye.

In a small bowl, combine all ingredients except the tempeh. Stir briefly until it forms a smooth but thickish paste.

Bake for 15 minutes. Flip tempeh strips over, brush with the remainder of the miso-maple paste and bake for another 15 minutes, or until vegan bacon strips are just starting to blacken at the edges and the whole kitchen smells smoky, sexy and fabulous.

Remove from the oven, add to salads, make vegan BLTS, chop and add to tofu scrambles, enjoy any way you like.

An earlier version of this post ran on April 13, 2015. More at soulfulvegan.com.