Mahatma Gandhi, a meatless kind of guy, believed focusing on a meatless diet for health wasn't enough -- we need something more, something that taps into our basic humanity. For Gandhi, that something was "the moral consequences" of what we eat. Fast-forward 80 years and I'm just back from Vida Vegan Con, where vegans take their passion and advocacy to the next level -- the economy, or rather, the v-conomy. 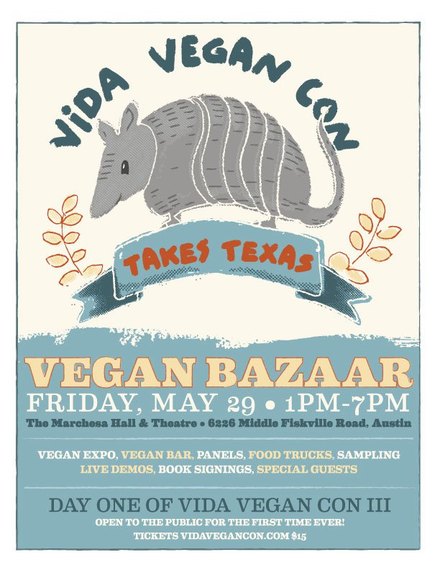 Compassion will always be a vegan cornerstone, but that translates these days not just about loving animals (we do) but about meeting people where they're at. Morality makes people edgy. Just try appealing to a beef-lovin' bubba or a brisket-baking bubbie about higher purpose, and good luck making a convert. Now the focus is the v-conomy -- making a living from what has pretty much till now been a lifestyle -- being vegan. That's where we make change happen on a broader level. You don't buy the vegan arguments for health, the environment and animal welfare? Fine, just buy the vegan cupcakes and vegan wine.

Wanna get rich? Invest. Enterprising entities are backing vegan cheese, vegan meat, and vegan mayo. They're doing it not out of ethics, but because these are in-demand products and they're getting a good return on their investment.

The v-conomy is a growing field, and unlike our current economic system, it's sustainable as a business model and does the planet and all the creatures on it a nice turn, as well. It's still a business, though, and succeeding in the v-conomy requires being equal parts soldier, crusader and town crier.

It's not enough to have a better (more compassionate, more delicious, more sustainable) vegan product or service, you gotta get the word out -- a challenge in our crowded marketplace and cyberspace. The v-conomy's secret and affordable weapon is vegan messaging, via social media. Thanks to The Sexy Vegan, Eco-Vegan Gal,Vegan Yak Attack and all whose VVC workshops may yet help me get beyond being a social media embarrassment (I'll up my Instagram, I promise).

I would like to make a living at being vegan but like Gandhi, I became one for the environment, for the animals, for love. There was a lot of love at Vida Vegan Con among a lot of driven, fun, inspiring vegans. Whether we're doing it for business or pleasure, Miyoko's Kitchen creator Miyoko Schinner exhorts us to fly our vegan banner high. Yes, vegan products, like vegan people, are healthy, natural and can compete with what's out there in the conventional but unsustainable marketplace, but let's call them -- and us -- what we are. Vegan.

Goes to show you Gandhi was on to something when he talked about how social change happens. "First they ignore you, then they laugh at you, then they fight you, then you win." With vegan, it's a win-win for everyone.

from my book, Feeding the Hungry Ghost: Life, Faith and What to Eat for Dinner, copyright Ellen Kanner, 2013, New World Library.

Put the dates and apricots in a food processor and pulse briefly, until they form bits that just start to come together in a mosaic. Add the cardamon seeds, anise seeds and walnuts.

Pulse again until just combined; the mixture will not quite adhere to itself. For lack of a better world, we can call it dough.

Wrap and chill the dough for at least 2 hours and up to overnight.

Pour the cinnamon (or cocoa) ito a shallow bowl. Grab a generous pinch of the dough and roll into a ball about the size of a walnut. Roll the dough ball in the cinnamon until it's dusted on all sides. Continue with the remaining dough until you have 2 dozen sugarplums. The dough tends to absorb the spice, so roll the balls in the cinnamon a second time, if desired.

They keep beautifully for a week or more chilled in an airtight container.