That the United Nations declared 2013 to be the International Year of Quinoa came as news to Rene Chila Mamani. To reach him, you must first fly to La Paz, then drive a full day along dirt roads up, up, up, up the Altiplano, "a high Andean plateau that is basically a desert," says Fair Trade USA's Sarah Connolly, just back from a visit. "It's 12 or 13 thousand feet in altitude and the climate is incredibly harsh. The soil does not have a lot of nutrients, there's very little rainfall."

Then, says Connolly, "You see these bursts of red and gold and black patchworked all the way up to the top of this high volcano. It's beautiful." This is quinoa ready for harvest. "It's the only crop that will grow here." Mamami is one of people who grows it.

Families have been growing quinoa here for thousands of years, and for natives including Mamani, it's been a staple of their diet. We've just discovered this ancient grain here in the new world, but are making up for lost time by snarfing it, consuming over half the region's annual harvest. The demand has driven up prices to the point where some farmers can no longer afford to eat the crop they grow. Another worry is that quinoa, long farmed sustainably, will fall prey to conventional farming methods that could endanger this precious, precarious region. Eating the quinoa farmers and their land out of existence is not what the United Nations -- or the quinoa farmers -- had in mind.

Truth be told, Mamani and other quinoa farmers were unaware it's the International Year of Quinoa. However, says Connolly, Fair Trade USA's senior supply chain manager, "they're all very aware there's this international excitement and interest in quinoa." They're also aware of the benefits of Fair Trade.

Fair Trade buyers, "pay this extra community development premium to farmers, and the farmers have more resources to make their work a little bit easier," Connolly explains. In turn, certified growers must use that money to invest in their community and "in practices that will allow the land to stay productive." It means sustainability for the environment, but also for the culture. 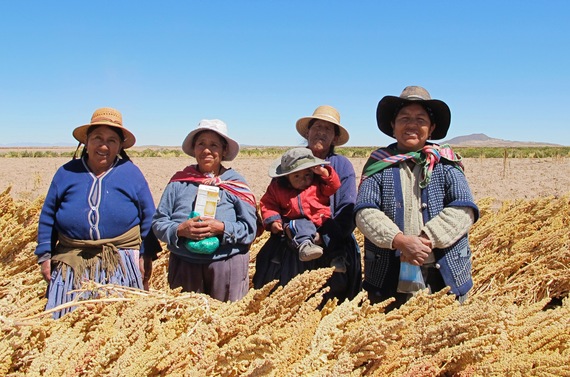 "In the 1980s when quinoa prices were so low, everyone left the region," says Mamani. Many moved to the cities, taking jobs in manual labor, leaving behind their native traditions and native diet. Quinoa is priced high in Bolivia, higher than what Bolivian president Evo Morales calls "capitalist fast food."

The global interest in quinoa combined with what Fair Trade buyers paid the region's quinoa farmers changed everything. "Now our children are coming back because they have a different vision and sense of possibility," Mamani says. He and his fellow farmers have a sense of possibility, too.

"The farmers just said over and over again, 'We work so hard to grow this crop, we want the recognition of Fair Trade, we want that premium to protect the environment through the way we're cultivating.'" An environmental activist, Connolly came to Fair Trade USA five years ago, "pushing for big picture change for environment and social justice. I've always cared so much about what I buy, what I consume, how that affects people," she says. "This was one of the most inspiring Fair Trade trips I've ever taken."

Fair Trade means Mamani and his fellow farmers can still eat quinoa every day and "present our quality product to the world for all of humanity to enjoy," he says with a grower's pride. "It's a blessing from God that we can survive from quinoa alone." 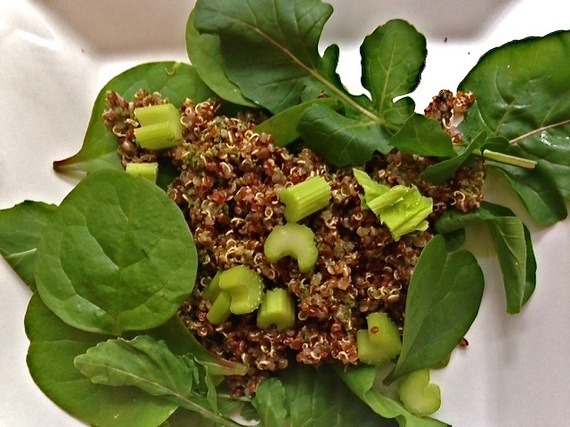 Quinoa, a whole grain, has a natural protective coating called saponin. Rinse quinoa before cooking and you're good to go with this easy summer salad. It looks like a bowl of jewels, tastes like a mouth of wonderful. It's high in protein and low in calories and fat, too. Serve room temperature or slightly chilled. Good on its own or mounded on a bed of fresh spinach, arugula or other salad greens.

Bring water or vegetable broth to boil over high heat. Pour in quinoa. Cover and reduce heat to low. Cook quinoa for about 25 minutes, or until all all the liquid is absorbed and quinoa's little endosperm tails appear.

Gently mix in mango. Season with sea salt and pepper.

Keeps covered and refrigerated for 3 days, although nuts may lose some of their crunch.