The photo above [SEE UPDATE BELOW] has been extensively passed around recently, and for good reason: it's a peek into the rarely-seen world of mechanically separated meat.

Someone figured out in the 1960s that meat processors can eek out a few more percent of profit from chickens, turkeys, pigs, and cows by scraping the bones 100% clean of meat. This is done by machines, not humans, by passing bones leftover after the initial cutting through a high pressure sieve. The paste you see in the picture above is the result.

But, hey, at least it tastes good, right?

The resulting paste goes on to become the main ingredient in many of America's favorite mass-produced and processed meat-like foods and snacks: bologna, hot dogs, salami, pepperoni, Slim Jim-like jerkys, and of course the ever-polarizing chicken nugget, where the paste from the photo above was likely destined.

UPDATE II, 10/5/10: Because the original source of the photo cannot be fully verified, we have removed it from this post. While no one has been able to prove definitely whether the image shows mechanically separated poultry or pork, we do know that those products look quite similar to the substance in the photo. For example, on the Food Revolution show, Jamie Oliver demonstrated a version of the process ("how to use all the leftover bits to make food"), by hand, to kids, in a failed attempt to scare them away from the mass-produced foods that such meat slurries end up in (failed, because the children still wanted to eat the resulting chicken nuggets despite his demonstration). The chicken slurry he made before their eyes bears an uncanny resemblance to the passed-around photo: 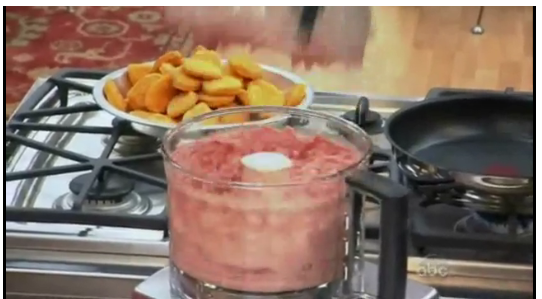 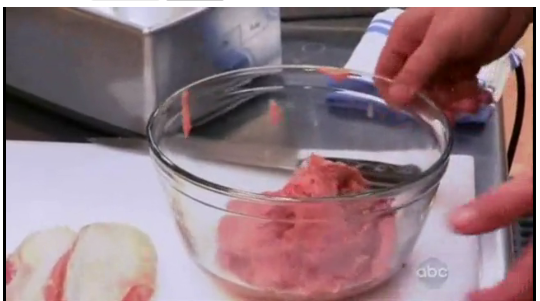 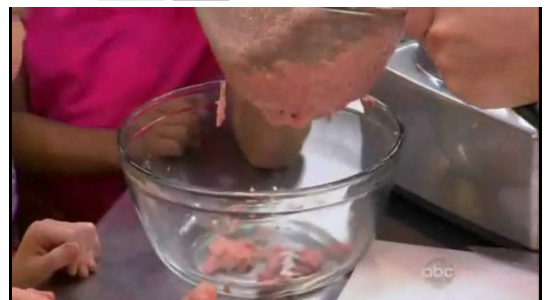 Here is a picture of mechanically separated pork and beef scraps in a hot dog plant, emerging after emulsification, from a National Geographic video: 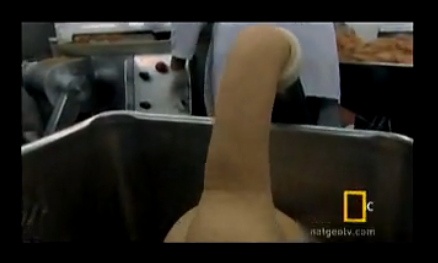 And here's another shot of the resulting product from mechanical meat separation, from this video, which advertises a company's suite of machines that perform these functions: 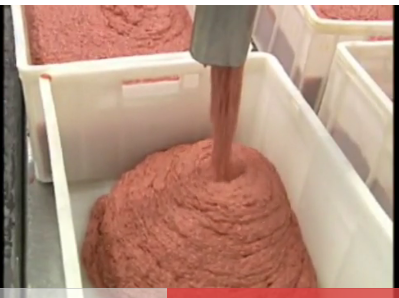