Ronald Rose, an enterprising District Collector of Medak District of India's Telangana state has his heart towards health and education sector reforms. Under the leadership of Dr. Nirupam Bajpai of the Columbia Global Center, Mumbai, a team of learning experts from Columbia University New York will be implementing a reading method based on cognitive science.

India has embraced modern educational methods that are inspired by the complex environment of middle class children. But these have not benefitted everyone. The Annual Status of Education Report (ASER) reports a downward trend of basic literacy over the past 10 years. Children in early grades often cannot read a simple text second-grade in their local language. In 2014, 28% of third graders in Andhra Pradesh and Telangana State were stuck at recognizing only words and couldn't read beyond; 21% of fourth graders continued to perform at this level and cannot easily read a second grade story. Without this skill, they cannot learn other subjects, such as science, social science and math.

There are many likely culprits: busy parents, indifferent teachers, a lack of accountability, overloaded curricula. Schools have tried hard to improve. But the problem may lie in efforts to pitch reading to the competencies of children who have been exposed to letters since birth. Their brains have adapted to books with small letters, and in the first grade they can focus on language. But poorer children have not received the same home training, so they fail with textbooks that start with entire words and sentences.

Very basic skills depend a lot on the way memory works and humans perceive shapes in their environment. Cognitive neuroscience, a field that links brain and behavior, offers research to help the low performers get to fluency quickly.

According to Dr. Helen Abadzi a cognitive psychologist at the University of Texas at Arlington, reading capitalizes on the brain's ability to make bigger shapes out of consistently presented shapes. The up-front visual recognition therefore is critical. Inexperienced children should learn letters one at a time and read texts in standard fonts that are large and spaced apart. The brain is then able to identify shapes fast, take a few symbols and make larger units out of them. To make this happen quickly, students should spend a lot of time in individual reading practice. They should link shapes and sounds, then blend them into syllables and eventually words. After several hours of practice, a part of the brain gets activated that sees words as if they were faces. Then reading becomes effortless, and people can read volumes of text and understand them. In languages that match sounds and letters consistently (like Telugu but unlike English), basic literacy can be achieved by the middle or end of first grade.

A focus on the variables that really matter up front also simplifies teaching methods. Reading often involves multiple materials and complex activities. In this case teachers are asked to present a letter, ask students to decode, and then spend most time passing by each student for a few seconds of corrective feedback and encouragement. To practice, students need sufficient materials, perhaps 500 words of text. Language becomes important only after speed increases and children can hold messages together in short-term memory. Then they can view pictures simultaneously with text, write, and discuss content.

This approach, simple, yet science-driven will be implemented in 20 schools in Jagdevpur Block in Medak District to teach Telugu, a local language of the state. Similar projects have been done in other countries (particularly the Millennium Villages Project site in Rwanda and Malawi), with successful results. This pilot has taken into account the nuances of the Telugu language and adapted the approach, textbook (see picture below), and instruction according to the context in India. 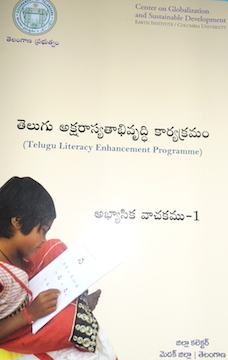 Evaluations will show results and pathways to improvement so that low scorers catch up and advance. But for now the goal is clear: To use student's time efficiently by providing individual practice time with teacher feedback on a constant basis.