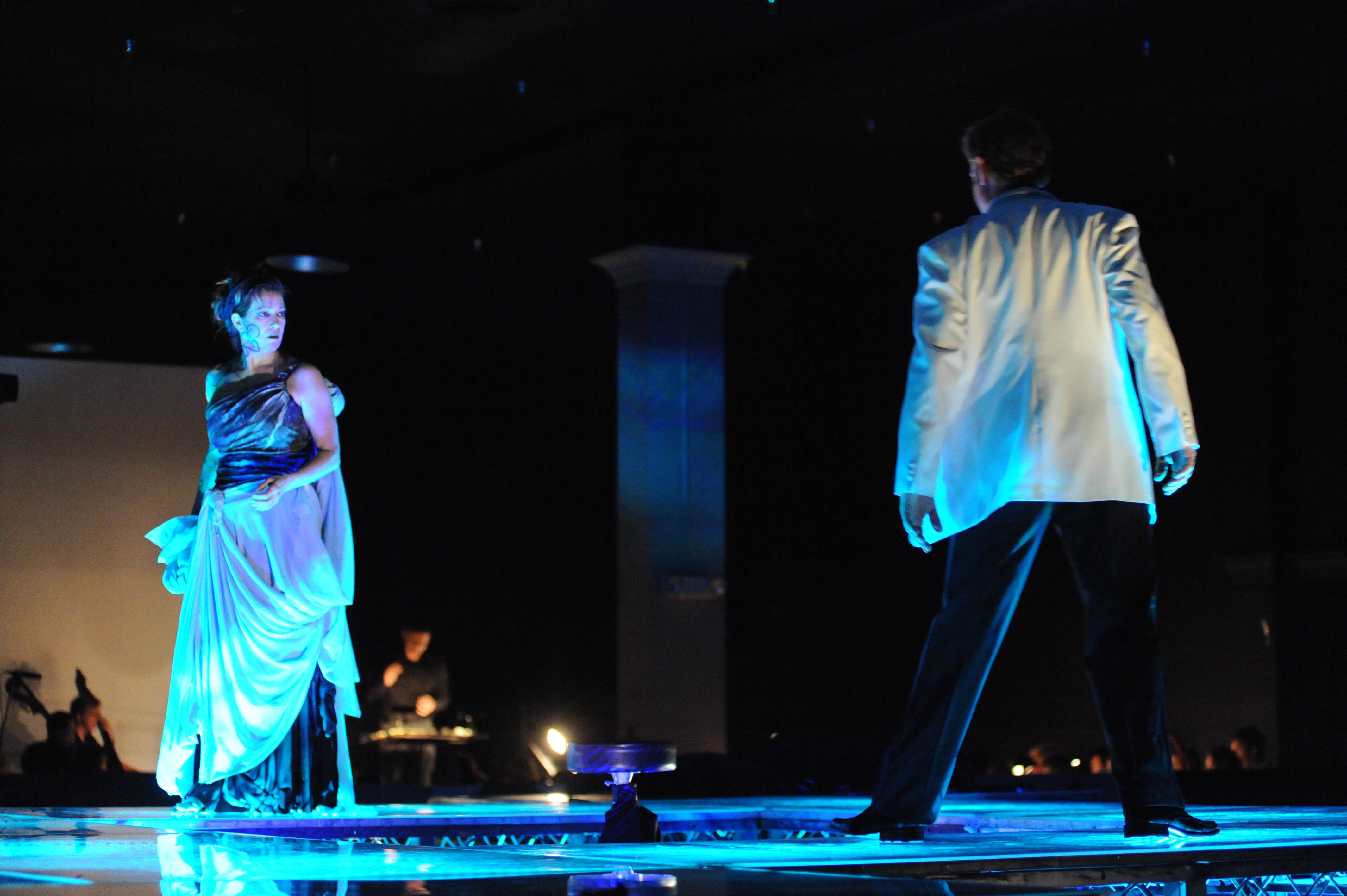 There is at least as much to praise in the careful preparation of Luigi Cherubini's rarely performed Medea, as in its ultimate performance by the Long Beach Opera. That amounts to a lot on both counts in the U.S. stage premiere of the opera's original version, which opened the 2011 season on January 29. In keeping with the LBO's iconoclastic ways, it was staged in the site-specific space of the former EXPO Furniture Warehouse in north Long Beach.

Cherubini was one of those innovative composers to whom the even greater ones that followed were indebted for his bridges to new stylistic worlds. What made him so compelling in the aftermath of the French Revolution was his choice of emotionally charged scenarios, his muscular treatment of the orchestra, and his dramatic vocal declamations. For all that, we listen to Cherubini today with ears influenced by what others like Beethoven and Weber would make more of later. 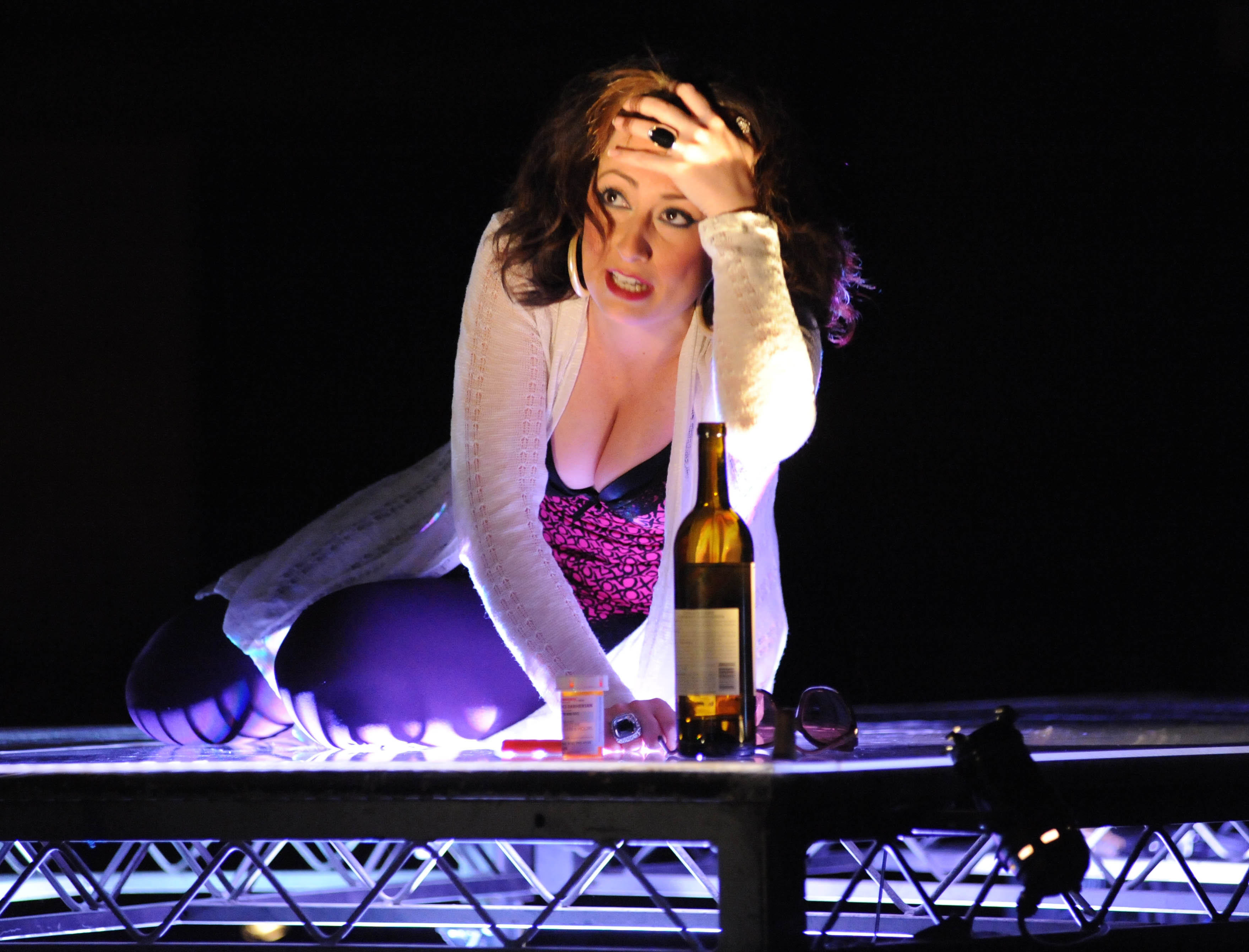 An editor's scalpel and some creative license shaped this production, so the term "original" in describing it must be taken with a grain of salt. LBO General Director Andreas Mitisek's Medea has enhanced dramatic flow at the expense of its reflective choruses and other passages cut from the score. Some of that music was strategically rearranged for single voices when deemed important for the narrative. An element of the ancient Euripides play was interpolated as prologue to the opera. Original spoken dialogue was also restored. (A nineteenth century version, in Italian and with recitatives by Franz Lachner, is more familiar in recordings, and it was once a vehicle for soprano Maria Callas.)

The net result of the LBO's rewriting is an opera considerably shorter (an hour and a half vs. three hours) and leaner musically than the original, but with newly gained dramatic thrust. That drama is further advanced in the expressive English translation of Suzan Hanson, who also performed the title role. Mitisek's creative energies are present everywhere else as stage director, set designer and conductor.

The production is built around two contemporary metaphors: 1) marital conflict as a boxing match -- this one on a raised square platform centrally placed in the vast interior of the warehouse like Madison Square Garden, and 2) the excesses of self-indulgent beautiful people in the mold of Lindsay Lohan and Robert Downey Jr., whose fame and fortune too often lead them into dissipation. Neither of these metaphors is new, but both are employed effectively.

The action is omnidirectional on the central stage, with actors in anachronistic dress -- some modern, some classic -- facing several directions at once. Lighting is projected up from within the central stage unit itself, carving sharp contrasts on the actors' faces. 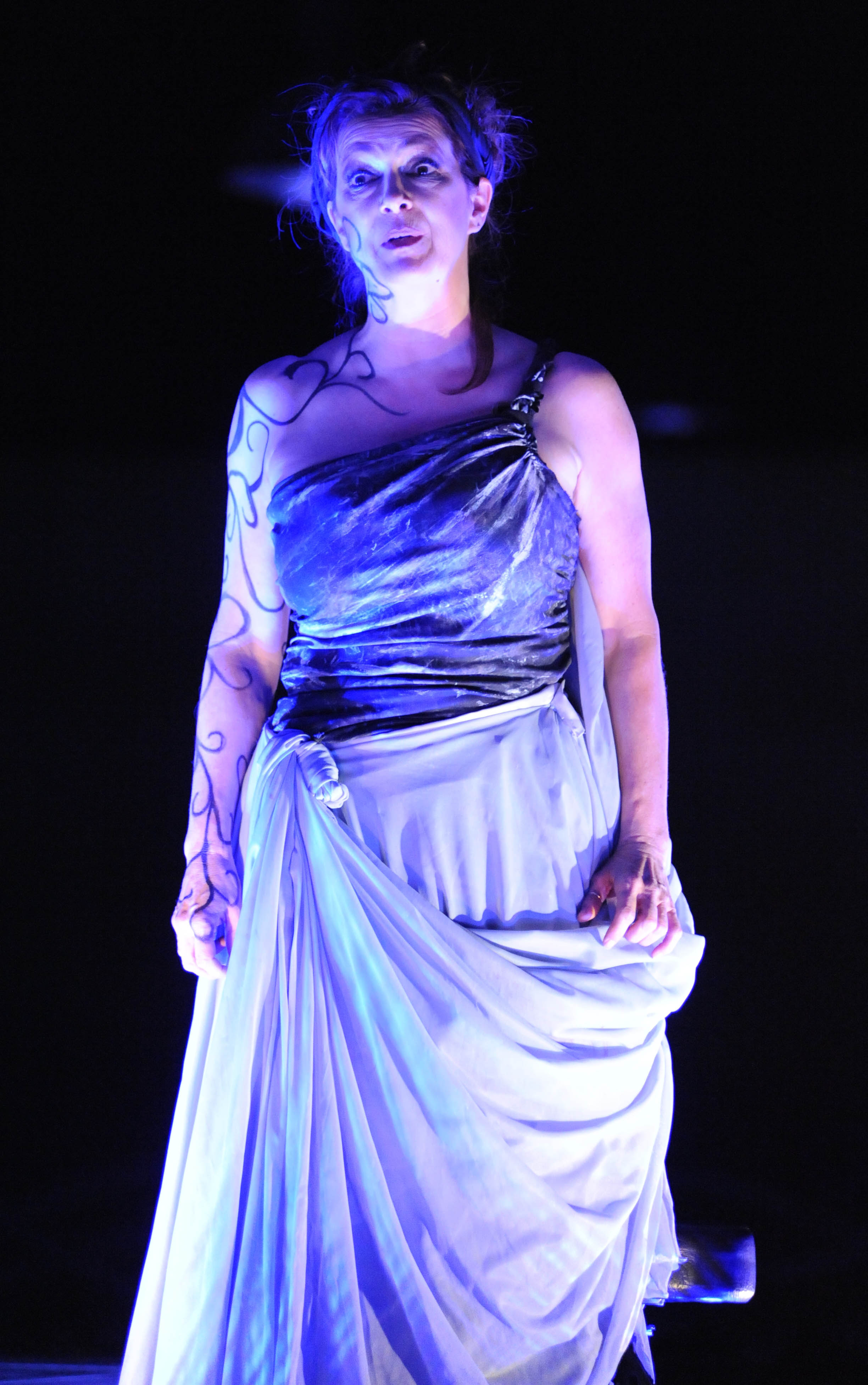 Medea's agony is central to the story. She is an ally betrayed, a lover forsaken, a wife scorned, and a mother soon to be bereft of her children. Her prologue tells us that she had secured her husband's career by helping him obtain the Golden Fleece. Yet the heedless man-on-the-make now throws her aside for a nubile cypher, his marriage to whom will secure him another rung on the ladder to political power. Medea is abandoned without remedy or recourse. We see under her large skirt the writhing bodies of her children by Jason, foretelling the outcome of a struggle between protective maternal instinct and a compulsion for revenge. That compulsion will turn into a trail of blood, consuming the whole kingdom.

Vocal and dramatic performances of the seven principals were on a very high level. Hanson's steely but plaint soprano imbued Medea (left) with an intensity that invoked sympathy more than revulsion. Tenor Ryan MacPherson was stentorian as Jason (below), a perfect fusion of heroic bearing and hunky male callousness. Ani Maldjian as Dirce (above) was the spoiled, erotically charged, pill-popping daughter of Roberto Gomez's blustery king, Creon. Peabody Southwell as Medea's attendant Neris nearly stole the show with her melting pledge of loyalty to her mistress, in a duet with a sinewy, entangling bassoon. Ariel Pisturino and Diana Tash, along with Southwell, contributed solid performances as chorus stand-ins. The voices of all filled with ease the amorphous warehouse cavern. 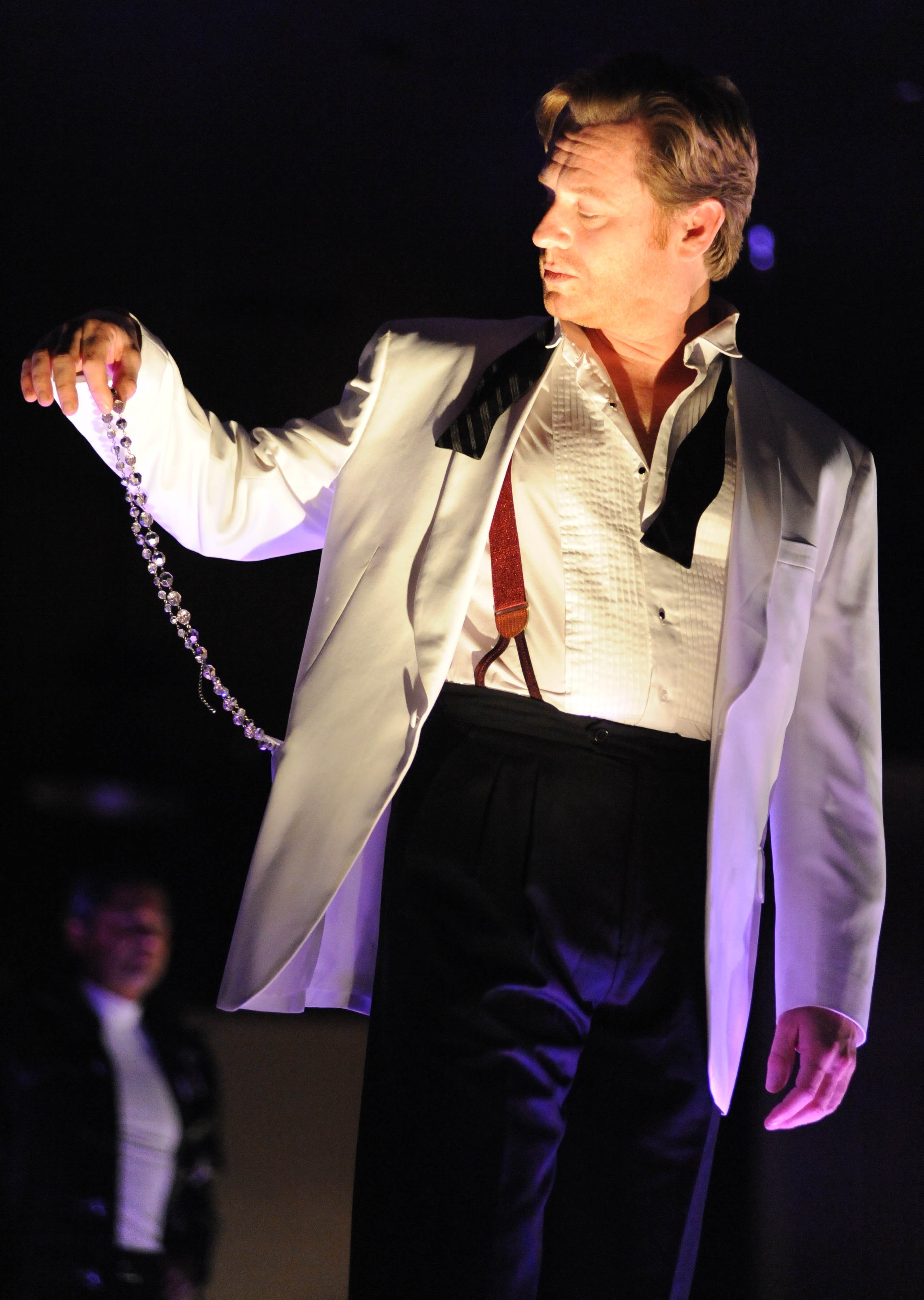 The orchestra's big-boned effects were well performed if not ideally transmitted in the tubby acoustics of the space and its corner location within it. In particular, the sheen of the upper strings was missing. One can hear Cherubini struggling in his orchestral textures to free himself of the operatic conventions he inherited, straddling as he does the high classic tradition with emerging romantic tendencies.

Coordination between singers and the somewhat remote orchestra was better than might be expected, facilitated from monitors at each of the four sides of the center square-cut and due, no doubt, to solid drilling from Mitisek, who led the proceedings with a steady hand throughout.

Site-specific productions have certain risks, including unanticipated glitches to be worked out after initial shakedowns. For this viewer on opening night it was the supertitles projected on each of the far walls. With the audience at floor level viewing the action several feet above, the actors mostly obscured their own scrolled utterances.

It was bold of Euripides in 431 BC to alter an old myth by assigning the murder of Medea's children directly to her and not the occupying Corinthians. It was equally bold of Luigi Cherubini to write an opera in 1797 that went even further by shaping perceptions of a woman at least as much a victim of her crime as its perpetrator. It is not surprising that both productions were met with less than full acclamations from the predominantly male audiences of their respective eras.

Medea's tragic story is one that remains modern by speaking to the issue of human rights in general and women's rights in particular. Cherubini may have set the way forward for male composers to come, but he also contributed to the advancement of women when he exposed the injustice of male dominance over them. This advocacy, as much as Cherubini's trend-setting music, keeps historically important Medea relevant as well for today's audiences.

Just as Gluck at mid-eighteenth century had scraped off the excesses of ornamented Baroque opera to prepare for the truer-to-life operas of Mozart, so Cherubini was to abandon the relatively polite manners of Mozart's high classical style in favor of the more emotionally charged sound-worlds in the era of the French Revolution.

Beethoven, Weber and Schubert saw in Cherubini the operatic equivalent of the sonata form's expanded expressive possibilities. An immediate operatic response to Medea, which had premiered in Vienna in 1802, was Beethoven's Fidelio of 1805-1814. Just as heavily influenced later was Weber's Der Freischütz, the first German romantic opera, and one which has motivic elements lifted directly from Medea. Composer Louis Spohr, an intimate of both Beethoven and Weber, was to write of Cherubini in his diary of 1821:

With the richness of his invention, his select, often exotic harmonies, and his clever exploitation of available resources, gained through long experience, Cherubini can achieve such overpowering effects that one is swept along, even against his will, and, rendered oblivious to the obviously contrived, surrenders to his feelings and his pleasure. What would this man not have accomplished if he had written for Germans instead of for Frenchmen!

German chauvinism aside, this was a description of the new spirit of romanticism in opera, and it would be no exaggeration to claim for Cherubini the role of co-founder of German romantic opera. Decades later, no less a creative dynamo than Richard Wagner was still assiduously studying the scores of Luigi Cherubini.

Rodney Punt can be reached at Rodney@asrtspacifica.net