Cable news networks largely ignored the controversy surrounding Jeb Bush's use of a private email account despite dedicating significant airtime to Hillary Clinton and the private email address she used during her time in the State Department.

Last week, The New York Times reported that like Clinton, Bush had an email transparency problem of his own. The Washington Post later wrote that the former Florida governor used his private email account during his time in office to correspond about matters of United States security and the military.

And yet, the media put much heavier focus on similar news that Clinton had used just one private email address during her four years as secretary of state.

On March 16, the first weekday after the Bush story broke, cable news networks only gave 12 minutes and 22 seconds to the news that it took him seven years to comply with a Florida public records law and turn over his private emails, according to a new report by Media Matters.

CNN, Fox News and MSNBC, however, spent 4 hours and 49 minutes covering the Clinton emails on March 3, the day after The New York Times broke the story.

MSNBC was the greatest offender, devoting 2 1/2 hours to the Clinton controversy while spending just under 4 minutes on Bush.

Take a look at the chart below, via Media Matters: 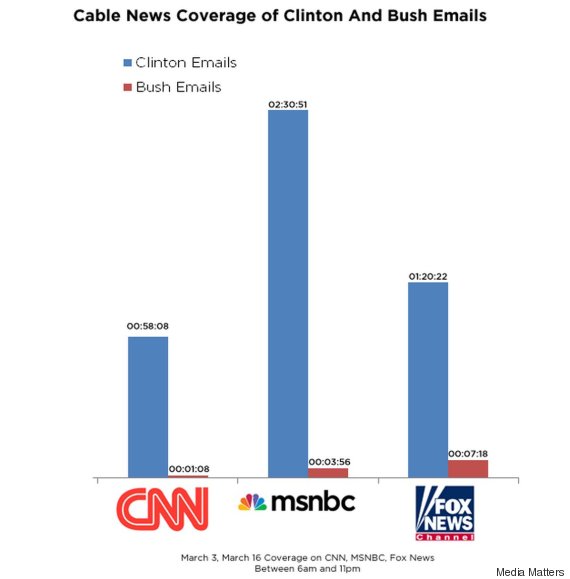