It bears repeating: Media ethics aren't a one-off endeavor and shouldn't be a priority only when trouble brews.

The topic came up repeatedly during the Arab Media Forum in Dubai. 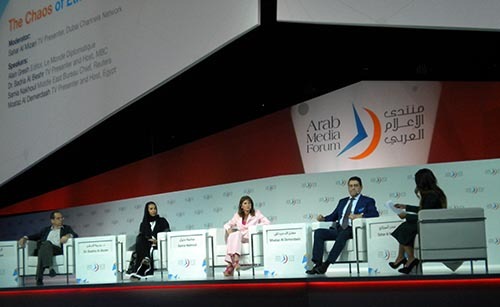 Kent also provided visual examples of where AP draws the line at publishing pictures deemed unacceptable or unethical, and how far the agency is willing to go with news reports that are disturbing. 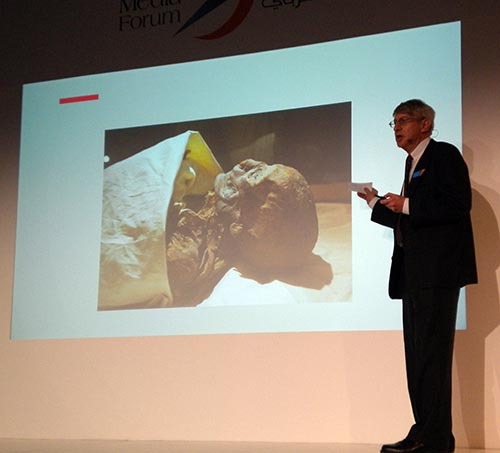 To say that a picture is worth a thousand words is an understatement, and nobody understands it better than Patrick Baz.

Baz, the Middle East/North Africa (MENA) photo manager at Agence France-Presse (AFP), examined the elements of a good photo in journalism, noting that his iPhone -- considered by many an intrusive device -- was his camera with phone features.

Additionally, he zeroed in on what goes into captions, another spot where professionalism, or the lack thereof, can be detected. 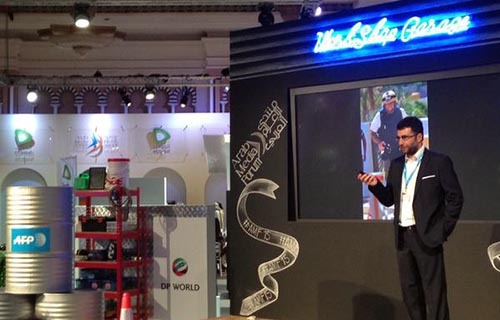 But, it's not just pictures and citizen journalists' content that's causing such consternation.

Traditional broadcast media in the MENA region and beyond are equally to blame for the incendiary environment in which we find ourselves today.

There was a time when ethical constraints meant something and deviant behavior on the air was the exception.

Sadly, the equation seems to have been reversed, as I pointed out in a presentation at the "Radio and Television Broadcasting Conference: Policies, Transformations, Challenges" organized in Amman by the Jordan Media Institute.

Here are some of the PowerPoint highlights.

The key challenges are: How do we define media ethics and who sets the standards when the journalism of terror is becoming the new normal? 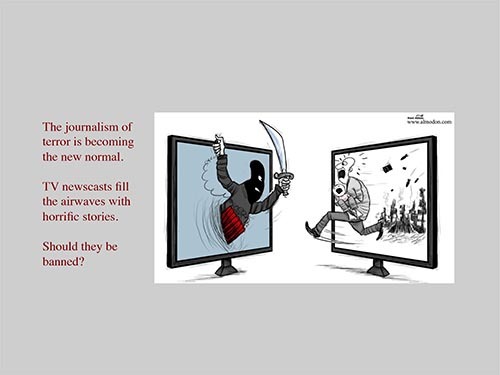 The journalism of terror is the new normal (Abu-Fadil)

TV newscasts fill the airwaves with horrific stories. Should they be banned?

Given the unstable security situation in many countries, broadcast news is relying more and more on footage and reports from alternative and questionable sources like citizen journalists, terrorists, activists, NGOs, governments and others

On April 19, 2015, CBS' "60 Minutes" aired a horrifying 15-minute report called "A Crime Against Humanity" about the Syrian regime's use of sarin (nerve) gas against civilians in the suburbs of Damascus in 2013. 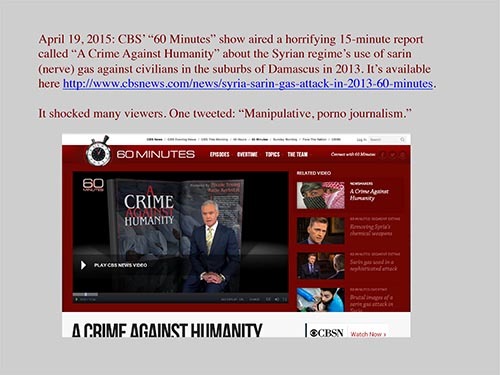 60 Minutes' "A Crime Against Humanity" (Abu-Fadil)

There are dozens of raw videos on YouTube and other websites. It's not new.

A CNN report on the "60 Minutes" episode said a relatively small number of viewers thought the images were inappropriate for network TV, particularly in the 7 p.m. hour.

The CBS report got overwhelming support, according to social media reactions, so does it matter if it was aired at all, over a year after the fact, and why?

On April 20, 2015 Al Arabiya satellite channel shed light on the Syrian government's use of chlorine gas on civilians.

Again, it wasn't new so should such events be reported at all? How often? How much footage should news organizations show? Why?

Pro- and anti-regime groups and individuals have been expressing themselves vocally and physically on Arab TV shows. Should such behavior be encouraged to boost ratings? 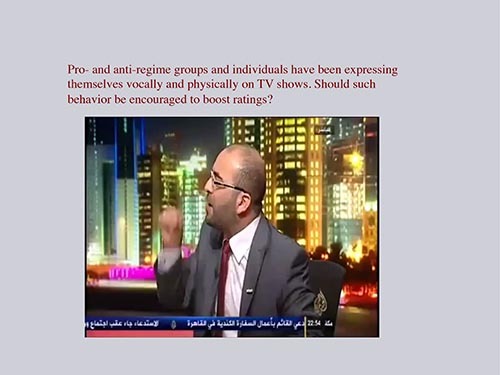 Should violent behavior be encouraged to boost ratings? (Abu-Fadil)

We've also been exposed to the horrors of ISIS (Da'esh in Arabic) in Iraq and Syria and other groups in the MENA region.

What guidelines do key Western media follow in covering such organizations when there's no access to the main actors?

Representatives of major Western media addressed the issue of "The journalism of terror: How do we bear witness when everybody is a witness?" at the International Journalism Festival in Perugia, Italy last month. 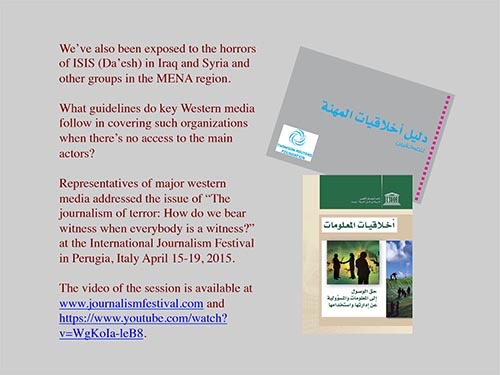 What effect does an unrestrained audio clip, unverified video, an unchecked interactive message have on others?

Is it free speech, or hate speech?

Do the media add fuel to the fire in the Arab region? Definitely. 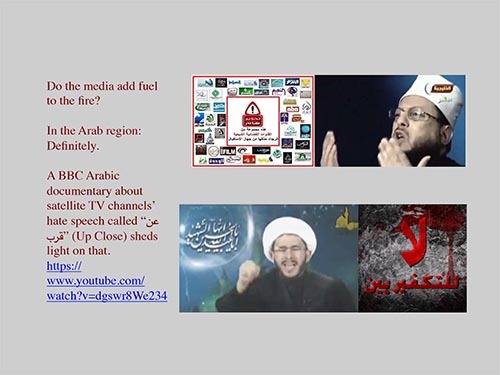 Do the media add fuel to the fire? (Abu-Fadil)

As for online media ethics, I asked if there were rules and laws governing what's in cyberspace and how broadcast media can incorporate social media and other Internet content while maintaining ethical standards.

I also referred to the "Guide to Online Media Ethics in Arabic" and the guidelines for graphic content of the Radio Television Digital News Association in the U.S. 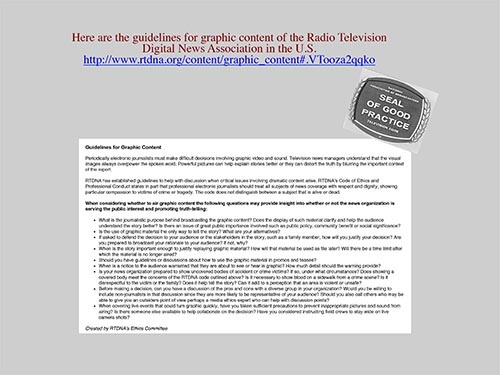 Broadcast media, online media, and multimedia platforms are a double-edged sword. They cut both ways.

We should keep that in mind every time we produce content and exchange information.