High heels and cleavage; a chiseled jaw and ripped abs.

Did I get your attention?

Sex differences are sexy, in the neuroscience lab as much as in the movies. Over the past twenty years, brain researchers have discovered that new findings about male-female difference command worldwide notice, and university PR departments are only too eager to pitch sexy data to keep their institutions in the public eye.

This is how a new study out of the University of Pennsylvania managed to be reported in 237 news outlets, including the BBC, Los Angeles Times, Huffington Post, Forbes, and The Wall St. Journal, where the headline, "Differences in how men and women think are hardwired," reveals much more about sloppy extrapolation than actual anatomy of male and female brains. 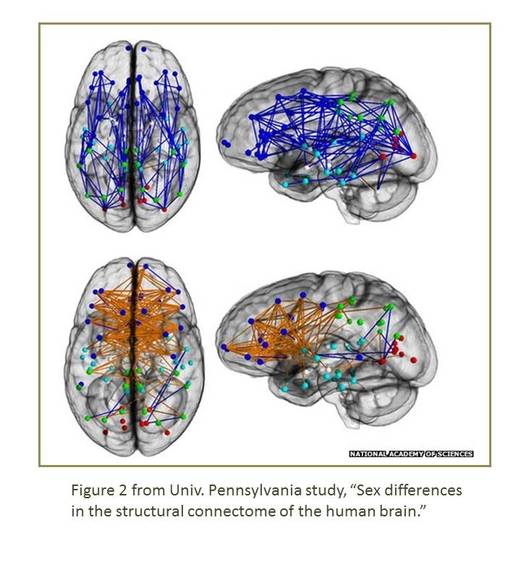 Yes, this study which was published in the Proceedings of the National Academy of Science (PNAS) found a real difference between the 428 boys and 521 girls it analyzed with diffusion tensor imaging (DTI), a newish version of MRI that is optimized for measuring the brain's white matter. Note that these subjects aren't exactly "men and women," as reported by all the news outlets, but adolescents averaging 15 years of age, who are still mid-way through brain development. And worse, the differences found by these researchers -- Penn associate professor Ragini Verma, first author Madhura Ingalhalikar, and six other colleagues -- were nothing close to the dramatic, all-or-none picture painted by the BBC:

"Male brains appeared to be wired front to back, with few connections bridging the two hemispheres. In females, the pathways criss-crossed between left and right."

In reality, sex differences found by Verma and colleagues were far more subtle, but tracing the several mis-steps from experiment to news story reveals a lot about why the science of sex difference remains perpetually distorted.

First consider the widely-reproduced Figure 2 (above) from the paper, which looks just as the WSJ describes -- two opposite wiring diagrams, with the "wires" headed only front-to-back in "men" and only side-to-side in "women." But while it may look like a subway map, these diagrams do not in any way depict every pathway in the brain. They depict only the small number of connections that differed statistically different between males and females. In other words, EVERYONE has "blue" pathways that run within a hemisphere, connecting, say, your visual brain to the short-term memory circuits in your frontal lobe, and "orange" pathways that connect between your left and right hemispheres (otherwise known as the corpus callosum). But in boys -- or specifically, in boys over 13 years of age (since younger kids did not show this sex difference), the connections within each hemisphere are somewhat larger than in girls, whereas in girls, the connections appear larger across hemispheres than in boys.

To be precise -- and isn't that the point of scientific research? -- the statistics in this study show that the average 15-year old boy has larger intra-hemispheric ("blue") connections than about two-thirds of girls, meaning the same connections in the average girl are actually larger than in one-third of boys. And vice-versa for the "orange" connections.

More importantly, the differences change over time. What the BBC and Wall St. Journal presented as permanent differences between men and women are probably just a snapshot of mid-adolescence. Dr. Verma and colleagues actually found less sex difference in the oldest group (17-22 years old), probably because boys are catching up to girls in brain development at this time.

Which gets to a likely basis for their striking, widely-publicized picture: Girls mature about 1-2 years ahead of boys -- in their brains as much as their height and reproductive organs -- so virtually any snapshot at mid-puberty is likely to find a sex difference. In other words, the stronger (orange) connections between girls' left and right frontal lobes may simply reflect their earlier maturation, which would explain why these "wires" appeared less abundant in the oldest group.

Another confound is brain size. It's well-known that males' brains are some 10 percent larger than females' brains, from birth through death. (Before you get too excited about this statistic, appreciate that every other organ, such as the kidneys, heart, and lungs -- are also comparably larger in males.) And it's also known that larger brains need larger white matter pathways to connect their relatively more distant zones -- much like a larger city needs bigger highways to get from center to suburbs. I'm no DTI expert, but was unable to find any mention in the PNAS methods of correcting for overall brain size, a typical control when comparing males and females. Had this been done , I suspect many of those "blue wires" depicting larger intra-hemispheric connections in boys would have disappeared.

In spite of the hype, this is not the first study to use DTI to look for sex differences in white matter development. Out of 12 prior studies, some found almost no difference -- or even opposite differences -- i.e., stronger "blue wires" in girls. Granted, the PNAS study is larger than these earlier efforts, but any time you need 1000 people to reach statistical significance, this should tip you off that the differences are modest, and measurable only at the population level -- as opposed to a slam-dunk difference you can expect between every boy and girl.

So how did we get from a smallish, possibly temporary difference between teen-aged boys and girls to "strong, hardwired differences" between men and women, according to The Los Angeles Times and hundreds of other news outlets? Who's behind the false advertising?

Everyone, it seems. Sex difference sells, and so journalists, university press officers, and even scientists themselves are powerfully tempted to extrapolate their claims far beyond the boundaries of real data. In this case, the extrapolation at each step is jaw-dropping, and serves to highlight the wide-reaching harm that can be done when popular spin eclipses actual science.

It begins in the PNAS paper itself, whose authors depict male-female differences in the most extreme way -- a wiring diagram showing only the differences, but hiding the considerable overlap in the data that other studies do depict.

Then we get to the authors' own spin: the last sentence of their abstract that claims these statistical differences in teenagers explain grown men's facility for "co-ordinated action" and women's talent for "intuitive processing." Putting aside the murky scientific definition of "intuitive," it turns out that the kids in this study are among a larger group of participants who were also tested for behavioral sex differences -- skills such as movement accuracy and recognizing emotional expression. And guess what? The boy-girl differences in these tasks were exceedingly modest -- even smaller than the brain differences. What's more, as Cordelia Fine pointed out in Slate, the researchers made no effort to test whether the wiring differences they observed among individual teenagers correlated with the behavioral measures they carried out in the very same boys and girls -- a seemingly ideal test of whether these connection differences truly underlie behavioral sex differences.

The spin accelerates in the University of Pennsylvania press release, where the modest differences between boys and girls suddenly morph into "striking differences between men and women." It then quotes one of the study's co-authors, Penn psychologist Ruben Gur who waxes, "It's quite striking how complementary the brains of women and men really are." This statement echoes the unproven assumption in the paper's introduction -- that cognitive sex differences show "adaptive complementarity," meaning they were selected for through evolution. This is a recurrent theme in Gur's research, which happens to have been done in collaboration with another of the PNAS study's co-authors, Penn psychiatrist Raquel Gur. I may be way off here, but I get the feeling the Gurs enjoy a particularly complementary marriage -- not that this proves anything about the evolution of sex differences.

Next comes the World Wide spin cycle, where an international cadre of science journalists somehow decides that these adolescent differences are "hardwired," meaning, fixed from birth. Remember, the differences were not even observed in younger children. How can the same science journalists who are breathlessly reporting on our amazing, plastic brains, suddenly overlook the role that learning plays in boys' and girls' brain development? What about all those countless hours boys spend playing action-packed video games while girls are busy gossiping on Facebook? When it comes to sex differences, science journalists turn all caveman on us and automatically assume that brain wiring differences must be pre-programmed into our X and Y chromosomes.

First, do no harm

OK, so maybe the findings were stretched a bit out of proportion. Science reporting often goes this way, whether it's covering a new medical advance or the next asteroid impact. What's the harm?

A lot, as it turns out. Brain science has enormous cultural currency and findings about brain sex differences have been repeatedly evoked to rationalize the different treatment and promotion of males and females. Consider the blog by Forbes contributor Eamonn Fingleton, who argued that these new data "weaken the case for formal or informal quotas for female participation in corporate management, in universities, and in fundamental science." Never mind all the evidence about implicit bias and stereotype threat, this study proves that women aren't going into computer science or advancing to leadership positions because of the blue wires in Figure 2.

My own experience with brain sex-trapolation centers around K-12 education. Having tracked the faulty translation of neuroscience to so-called "gender-based learning," I know it won't be long before Figure 2 is projected on large screens at teacher development conferences, licensing educators to stereotype girls as "hardwired" for "intuition" and boys for "action" and sadly precluding the kind of cross-training that is exactly what their brains need at this age.

But I do have a tiny inkling of hope. As much coverage as this over-extended paper inspired, it also triggered a sizeable backlash. We are starting to hear from a younger generation of cognitive and brain scientists who see through the sexiness and are perhaps beginning to appreciate that sex differences aren't quite as interplanetary as the old Mars/Venus pitch keeps trying to sell us.