I used to live in Boston, and as anyone from Bahsten will tell you, the iPad is "wicked fast." But what I'm increasingly thinking about is how great the tablet will be for "slow journalism."

By now most folks have heard of "slow food": the movement that launched in Italy after a protest against the opening of a McDonalds near the Spanish Steps in Rome. In the US, the slow food movement has come to mean fresh ingredients, locally and responsibly grown. Mass-produced fast food, as the likes of Michael Pollan and Alice Waters have noted, is both inferior in quality and taste, as well as harmful to the environment. 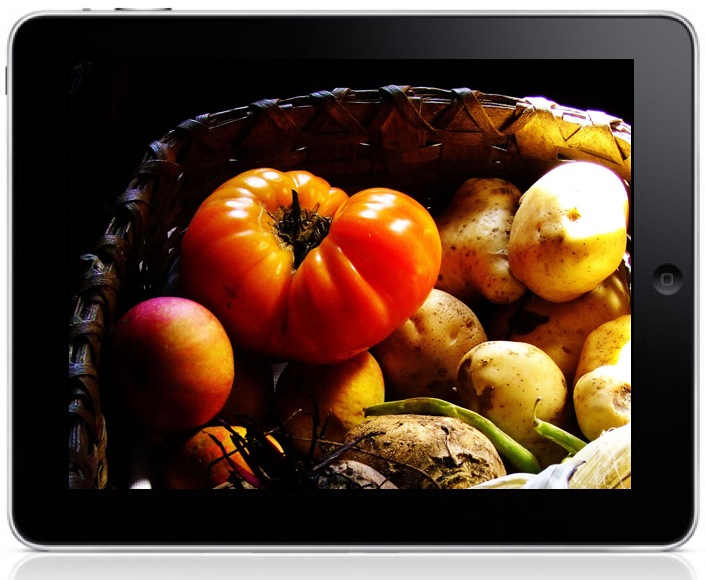 That brings us back to the iPad. Its capabilities align neatly with this agenda.

If you are one of the hundreds of thousands who already own an iPad, check out what has been called "the most deluxe iPad app so far": the app for The Elements: A Visual Exploration. Everyone else who doesn't yet own an iPad (are you waiting for the 3G version?), can preview the app on the publisher's site here.

The Elements is rich in content, visually stunning, and designed in such a way that even if you prayed your way through high school chemistry you'll find yourself getting sucked into this spin-able, zoom-able, even 3D-able version of the Periodic Table.

Essentially, because of the seductive experience of the iPad, you find yourself doing--learning--stuff that you never thought you'd bother with. Going back and relearning basic chemistry, for example.

Now imagine how newsrooms could use the iPad to inspire interest beyond the headlines. The LA Times Pulitzer-Prize-winning Altered Oceans series in 2006 on the pollution of the world's seas would have been even more compelling had there been an iPad to launch it on (although, ahem, the series was written with Flash).

And consider USA Today's presidential poll approval tracker that looks at the approval ratings of every president since Gallup first ramped up in the 1940s--it marries the graphing of data over time, with pop-ups noting historical events, with the ability to compare two or more presidents at the same point in their terms in office. Joshua Hatch, Interactives Director at USA Today, noted, "On any given day, it might get only a thousand or fewer page views. But over time, it really adds up. Over the lifetime of that graphic, which is now about a year old, it has been viewed nearly a quarter million times."

Doesn't that begin to sound like the business model for gaming? Put an unbelievable amount of time and energy into creating the thing, and then (hope to) reap the profits over time. Slow journalism--especially interactive slow journalism--could work like that. (Ok, perhaps with a difference of a zero in the number of readers vs. number of gamers.)

"One way to look at it is the difference between a 'page,' which is usually what a story is, and data and services, which is something that fulfills an ongoing need or interest," said Hatch. "With the limited resources we have, I think we're usually better off when we invest in projects that have a long shelf life, rather than one-day stories. A story with shelf life has the opportunity to grow over time. It's very much a tortoise and hare sort of thing."

A video and photo-heavy story like Altered Oceans or a interactive data visualization such as the poll tracker would make a great iPad app, or even just a great regular iPad web experience. Yes, it would take a lot of resources. But when the iPad hits a critical mass of audience, the public will have come to expect more imagination from the providers of news and information. As a result, iPad may give (at least some) news organizations an incentive to invest in the tortoise, to make the significant investment of reporting and programming time that interactive slow journalism takes.

Ultimately, such stories could not only be cost-effective over the long term, they could build name recognition. When a news outlet finances the reporting and posting of a breaking news story, not only is the value close to zero a scant news cycle later, but a great deal of its value for the outlet even in the current cycle is skimmed off when it appears in the relative anonymity of a news aggregator, such as Google or Yahoo. Sure the originating news outlet appears in a byline, but there's hardly a strong brand identity to the snippet. And how many folks read beyond the snippet?

That equation will change with slow journalism iPad-ready stories. A news aggregator or blog will be able to link to or talk about a interactive slow journalism story, but to experience the cool interactiveness of the story, one will have to go to the news site or news app and engage with it. That will make it more likely a viewer will remember the information, and more likely the viewer will recall what news outlet actually reported the story.

In an era when even McDonalds is offering several kinds of salads to change the long-term eating behavior of its obese consumers, the iPad may begin to justify investments that also only see their return over the longer term. The iPad may begin to change the calculation of what kind of journalism is "worth" reporting and worth consuming: fast-food-esque tabloid news or slow-food-type reporting and interactives.

Colorado Springs Reckons With Past After Gay Club Shooting