It's hard to know what to be more scared of these days: the Taliban gaining hold of loose nukes in Pakistan, commuting next to someone who looks a little feverish and has a persistent cough, answering a Craigslist ad posted by a med student, or losing one's job.

Then there's the worry about which of those fears are actually worth stressing about. Should we be panicked about the threat of nuclear war? On Fox News, Sean Hannity blurted "Look at the Taliban, how close they're getting to Pakistan's nuclear sites. How frightening is that?" while the Financial Times headlined a story: "Obama says Pakistan nukes in safe hands."

What about getting swine flu? Dr. Sanjay Gupta on CNN has told us that, "Imminent pandemic is scary no matter how you look at it," yet the Washington Post has soothed us to "Forget Germs. The Real Contagion Is Our Paranoia."

Which crises should truly terrify us? Which potential disasters should make us think about making a quick trip to the store for plastic sheeting and duct tape and then hunkering down in the basement at home surrounded by a wall full of canned goods?

It's no surprise that in the two examples above, the fear-mongering is coming from television. Cable TV, especially, has built its audience on not only breaking the news first, but on being willing to speculate on what's going to happen next. And the Fox News Channel, which has nine of the top 10 programs on cable news and in the first quarter of 2009 beat both CNN and MSNBC combined in prime time total viewers, is especially aggressive in coverage of crises.

But whether on TV, online, on the radio or in print, the crises that receive the most attention in the news are not always (or even often) those that pose the greatest danger or that kill the greatest numbers of people--either in the world or even in the region served by the news outlet. The crises that receive a disproportionate amount of attention are those that are novel, violent and intense--and that not only threaten the media audience but appear to select victims at random. So tales of emerging viruses, terrorist attacks and serial killings have become staples of media coverage.

Those sensational stories are the ones that keep audiences coming back for more. The public is fearful of the unknown...and so watches or listens or reads those stories with a frisson of both trepidation and excitement.

How can you tell whether you are getting a story that is balanced and proportionate to the crisis or one that is fanning panic and hysteria? One quick guide is to evaluate the pictures.

Here, for example, are the three levels of imagery that you should look for in stories about the swine flu (otherwise known as H1N1):

1.No pictures: If there are no images to accompany the story, there's a good chance that the event--or angle on the event--is being considered seriously, but not seen as overwhelmingly important (at least of overwhelming importance to the particular audience of the media outlet).

2.Neutral pictures: To establish their objectivity and seriousness, media will use hard-science photos (say an electron microscope image of the virus), 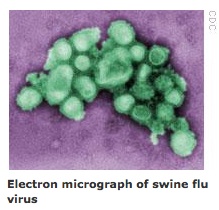 pictures of animals that are presumed to have initiated the outbreak (think of all the photos of pigs you've seen), 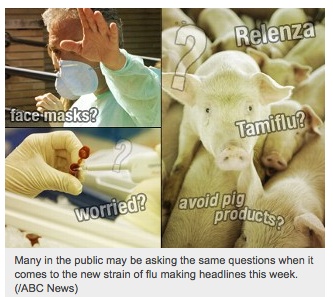 or photographs of some senior politician or health official. 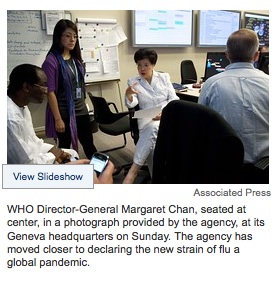 Stories illustrated in such a way may not be entirely balanced, but they are unlikely to be using scare tactics to attract an audience.

3.Emotional images: When media want to emphasize the risk to humans or want to play up the idea of contagion, they run images of space-suited doctors and masked civilians, especially women or young children.

Every one of the nine images of people in an online Time magazine photoessay on Mexico, for example, showed them wearing masks. You or your loved ones may be at risk. Be afraid, such stories are saying. Be very afraid. 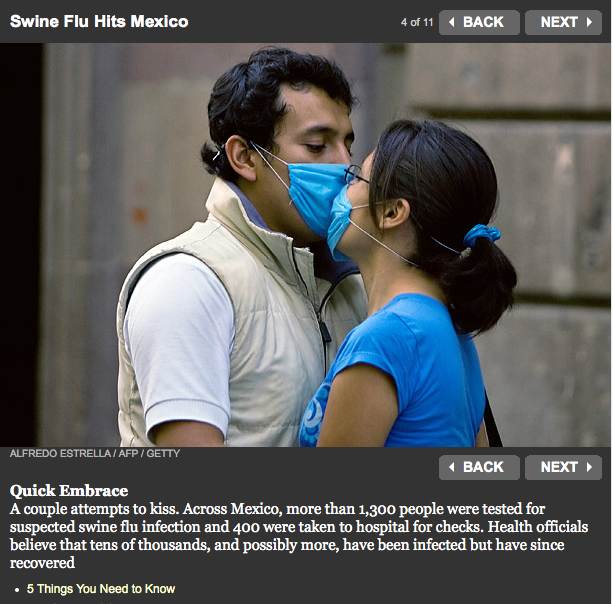 Note: I earlier wrote a book about how media cover crises, and included a chapter on how media cover epidemic diseases: See Compassion Fatigue: How the Media Sell Disease, Famine, War and Death (pp. 54-95). You can also read it here.