Or otherwise known as How Iran is Reframing Islam.

Last night, for the fifth straight evening, those protesting the Iranian election went to the rooftops of Tehran to shout "Allah O Akbar!" The cries of "God is great! God is great! God is great!" echoed across the city--and have been carried around the world via YouTube, Facebook and other networking sites. Said one blogger of footage of the scene: "Truly some of the most moving moments ever caught on video." 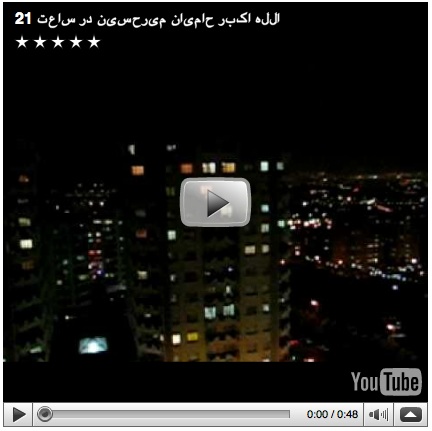 Thirty years ago, Ayatollah Khomeini"s revolutionary forces chanted "Allah O Akbar" to signal their opposition to the Shah's despotic reign. When less than a year after the Shah's overthrow, a group of students and militants overtook the US embassy and captured 52 hostages, however, that cry became synonymous with what many Americans viewed as the violence of Islamic fundamentalism--a sentiment only solidified when later suicide bombers took up the cry in the moments before they set off their explosive charges. "God is great" became less a prayer to many white Americans, than a call for the wholesale destruction of Western political institutions.

This week Iranian opposition leader Mir Hossein Mousavi has asked his supporters to use that prayerful call and the wearing of the color green as symbols "of spirituality, freedom, religious mentality and moderateness and [our] revolutionary roots."

And so watching Americans are learning to reframe the meaning of "Allah O Akbar" and re-imagine the people of Iran. The pictures from Tehran are showing that Iranians are not monolithic in their beliefs. Demonstrably they can be both committed to God and to free and fair elections. The pictures of the Mousavi's supporters in the street don't today strike fear in the hearts of most Americans, they instead prompt hope that countless numbers of the people who live in one of President Bush's so-called "Axis of Evil" countries, in a country poised to become a nuclear power, are committed to the tenets of an open and civil society. What fear there is is on the behalf of those in the street caught in the rising swell of vigilante violence. What fear there is is expressed in concern that the looting and beatings and shootings will become more widespread. What fear there is is for the Muslims who Americans see as victims of the violence, not for Americans themselves as victims of Islam.

In Mousavi's speech to his supporters he noted: "Sadly, an extensive effort...is being used to cut off our means of communication with each other, and it is not noticed that that the blocking of these lines would change the nature of the organised and goal-driven reactions to, God-forbidding, change into blind actions." Yet, he affirmed to his supporters, "I am certain that your creativity [will] result in new and effective ways of communication so that we [can] use our actions in a beneficial way for the country and the revolution."

The revolution, in other words, will be televised...and Twittered and YouTubed and Facebooked and Flickred, despite the authorities' attempts to block access to all of those. There's been a noticeable decline in the number of photos and videos that have been uplinked, but via message boards and proxy servers and relays and other end-run tactics, communication within Iran is continuing and information is continuing to get out.

If one looks back in time, it is possible to trace Americans' tarring of Islam as a religion of violence to the televising of the 1979 Iranian Revolution and the hostage-taking aftermath. Those dominated US broadcast news for almost two years: first Americans watched the Shah topple and then the network news programs became riveted to the hostage crisis, to the angry chanting crowds outside the embassy, to the humiliating, debilitating countdown of the 444 days of the hostages' captivity. Four days into the crisis, on Nov. 8, 1979, the underdog ABC News launched a late-night special: The Iran Crisis -- America Held Hostage. First hosted by Frank Reynolds, the anchor of the evening news , The Iran Crisis show was soon turned over to ABC's State Department correspondent Ted Koppel. Not quite six months into the crisis, ABC made its late-night special permanent, and changed the program's name to Nightline.

Today, in 2009, it is now the case that a new vision of Iran and of Islam is emerging from new media outlets. Iranians are at the beginning of this story, but as Mousavi says, "I am certain that your creativity [will] result in new and effective ways of communication." Iranians are not Americans, but via new technologies Iranians are not only talking to each other, they are speaking out to Americans. Let's hope that Americans continue to listen and to watch--and to finally understand that it isn't Islam that is violent, it is the politics of repression that is.

Note: Thanks to Sam Salyer for suggesting this column idea.