This isn't a new issue. I've written about it before. But in the wake of the landmark health care reform law, the media seems intent on continuing a "what if" story even after the fairytale has had a happy ending. 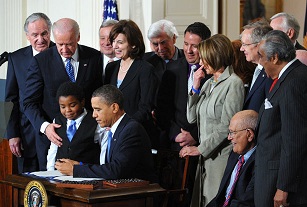 They did it before when the Senate and House passed health care legislation, which, as is normally the case, required a conference committee to resolve differences.

When Scott Brown was elected Senator from Massachusetts the media announced health care was dead, because Democrats had lost their filibuster-proof majority. The media knew that wasn't a deal breaker. With many conservative Democrats in the caucus like Ben Nelson (D-Neb), Mary Landrieu (D-La) and Blanche Lincoln (D-Ark), not to mention unpredictable Joe Lieberman (I-Conn), the leadership never had rock solid support.

Which is why it took a series of compromises, and each house hammered out legislation that was a pretty good start. Did anyone really think one Republican's election to the Senate was going to undo all of Congress' hard work when there was an obvious solution on the table?

The obvious solution was for the House to pass the senate version and iron out their differences later by what is called budget reconciliation. The media, however, again made it appear the legislation was dead in the same way they, after the revelation of Bill Clinton's involvement with Monica Lewinsky, declared him finished. Don't believe me? Just play back CNN senior news pundit John King's reports from early 1998.

The Democratic leadership knew if they lost the momentum they'd achieved it would be an admission of major failure, and they could very well lose congressional control in November. So, Senate Majority Leader Harry Reid, House Speaker Nancy Pelosi and the President forged a compromise to entice those in the House, mainly anti-abortion folks led by Bart Stupak (D-Mich), to vote for the Senate bill, even with abortion rights anathema to them. Language would be inserted in a budget reconciliation bill to dilute or nullify some of the stuff unacceptable to members of the House without screwing the support of Senators. What made it immune to Republican opposition was that the budget reconciliation process only takes a majority to pass, and was thus filibuster proof.

But even now, after most of the media got it wrong and the health care legislation passed, and the budget reconciliation bill cleared the House, new major concerns were bandied about Tuesday night on Anderson Cooper's CNN show. What unfolded was another "what if" that went like this.

The Republicans are angry. What else is new? They're going to tie things up in the Senate and prevent the budget reconciliation bill from becoming law. How? Well, the GOP Senate leaders are going to introduce amendments to the bill that are so carefully worded that it will force Democrats to vote for them. And if any one of the amendments passes it will send the bill back to the House and start the process all over again.

Except for one thing. It won't stop the already enacted legislation, which has been signed into law. All of its features -- including the aspects of the senate bill which were attacked by the Stupak group -- would begin to go into effect. So, what would the Republicans gain other than a ridiculous and foolhardy attempt to convince the American people, aided by the reckless reporting of the mainstream media, that their amendments would have the force of stopping a bill, though their main target has already become law?

And what about their "enticing" amendments? One, mentioned on Cooper's show, was that Senator Tom Coburn (R-Okla) has introduced legislation that bans insurance coverage for erectile dysfunction drugs to sex offenders. How could the Democratic Senators vote against that without succumbing to Republican attacks? Easy. They would just announce as they vote nay that, while they support such a notion, the Republicans are corrupting the amendment process in order to monkey around with an already achieved result.

The Senate Democrats campaigning for reelection can further reassure their constituents that their negative votes in no way mean they support Viagra for sex offenders by reintroducing the ban and all the other "obvious, how could you be against this sort of thing?" nonsense the GOP comes up with, as separate legislative bills unattached to the budget reconciliation bill. Whether or not the GOP blocks the subsequent Viagra prohibition -- either way -- their earlier accusations against the Democrats would ring hollow.

So, the solution is simple, even if the Republicans come up with a tantalizing "suggestion" that would be normally impossible for many Democrats to be against -- let's say gays in the military or legalizing gay marriage. Do the Republicans really think seasoned senate Democrats are so stupid to fall for something so obvious, something that would have no chance if it got back to the House, in the process killing the reconciliation bill?

For their part, the MSM prefers to sidestep the obvious answer as it continues to pose unlikely questions to feed the curiosity of its audience, which in turn creates anxiety for some of the less experienced members of Congress.

Is that the media's job? To invent scenarios that are for the most part implausible just to give them the excuse to have another ten minute panel discussion, which in turn keeps them employed while so many in their audience aren't?

It's time for the media -- all of them, broadcasters on NBC, CBS, ABC, Fox News, CNN and MSNBC, as well as newspapers and magazines -- to report news and not fabricate "what ifs" to satisfy their ratings. That time may be long in coming, but then, as in the case of healthcare reform, I believe in happy endings.