The nation is in the middle of a massive unemployment crisis. But, then, you already knew that. The U6 unemployment rate continues to hover in the 15-16% range, and at that rate, if you aren't among those unemployed or underemployed, it's almost inconceivable that you don't have a spouse, a sibling, a son, a daughter, a parent or some loved one who isn't caught up in this crisis. Those people fear for their future, and the people that care about them share those fears -- and perhaps have doubts about their own.

But if there's a cross-section of America that's blind to this crisis, it's those who ply their trade in Washington and the people who doggedly follow them around with steno pads and frantically scribble down whatever dribbles from their mouths. And here, the media has maintained an upside down and backward viewpoint on the crises that grip our nation. That massive unemployment problem? The media has this pegged as a problem that solely impacts the relative reelection hopes of politicians. Will Obama gain a second term, or will he be forced into a life of top-dollar speaking fees, book deals and lucrative appointments on corporate and foundation boards? The question rages!

Meanwhile, they've decided that what the public really cares about is the structural federal deficit. Poll after poll shows that this is not the top concern of Americans -- in fact, earlier this week, we saw Politico dress up their poll results in a way that made deficit concerns more prominent by combining them with the more resonant concerns of the unemployment crisis. But it hardly matters. This is the story the media wants to tell, and by God, they will keep telling it.

How hard has the deficit soap opera been pushed? Pretty hard, actually. And at the expense of coverage of the unemployment crisis. Here's Clifford Marks at the National Journal:

Major U.S. newspapers have increasingly shifted their attention away from coverage of unemployment in recent months while greatly intensifying their focus on the deficit, a National Journal analysis shows.

The analysis -- based on a measure of how often the words "unemployment" and "deficit" appear in major publications -- portrays a dramatically shifting landscape of coverage over the past two years, as the debate over how to fix the federal deficit has risen to prominence and the question of how to handle still-high unemployment has faded from the media's consciousness.

The National Journal includes a chart that puts this disparity in stark relief. 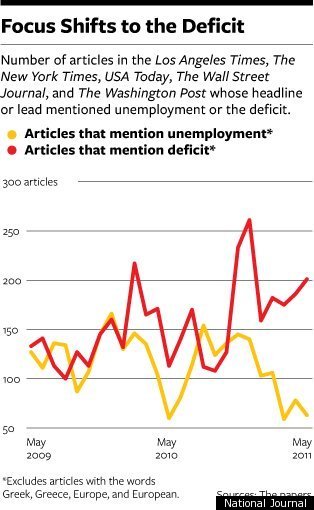 As Marks points out, the focus on the deficit is, in part, a measure of "how effective conservatives have been at changing the narrative of economic policy from one dominated by talk of fiscal stimulus to one now in lockstep with notions of fiscal austerity." Mother Jones' Kevin Drum concurs that this is "neither surprising nor, in a sense unwarranted." However, he says, "What is unwarranted...is the yellow line in the chart, the one that shows mentions of unemployment: it's down to about 50, which means about two mentions per week in each newspaper."

It's pretty much inconceivable that you can understand the magnitude of the unemployment problem, see that major newspapers are making passing mention of it, and come to any conclusion other than the fact that the media has massively failed in its duties to the public. But even in chiding the media for this failure, look at what The Atlantic's Derek Thompson does, in summation:

The upshot is that the production economy thawed. But the labor economy froze. And the political will to fix the labor market faded in 2010. The press was partly complicit in this fade-out effect. But it's hard to blame the media too much for resisting to write feverishly about nonexistent efforts to fix a static unemployment problem.

What? Are you effing kidding me, Derek Thompson? The media can't be blamed for failing to report on a massive nationwide problem because the powerful people tasked with solving it have abandoned the effort? No, no! It's easy to blame the media for that. You were well on your way to doing so, Derek Thompson, but then you wrote that idiotic concluding paragraph.

And that paragraph is a measure of the fact that the press are held hostage to their own preference for talking to powerful and influential people and sussing out what's on their delicate minds rather than talk to actual unemployed people, who are of no particular importance and, in some cases, even "working class." As always, there's no particular value in getting "access" to random poor people in America.

Powerful people, on the other hand, want to talk about deficits all day long, and when reporters spend all day chasing after them, it colors the coverage. Take the matter of pension benefits for federal employees, currently on the chopping block in the talks being staged by Vice President Joe Biden. If you are the Washington Post's Ed O'Keefe or one of his colleagues, you actually talk to the employees who are affected and get their take on the matter. You also talk to the people who are in charge of recruitment and retention and find out what's at stake.

On the other hand, if you're Lori Montgomery and you're only talking to the high-profile people grinding the matter into sausage paste with Joe Biden, it's a given that federal pensions are "generous" and that reducing the deficit is a "lofty goal." (Replacing, I guess, the old "lofty goal" of getting bright people to get into public service by promising them a decent retirement benefit as an offset to the low pay.) The whispers coming out of the Biden meetings lead you to state, declaratively: "The proposal to change pension funding represents one of the plumpest pots of potential savings under discussion by the Biden group." Which is interesting, because it doesn't exactly show up on the chart below: 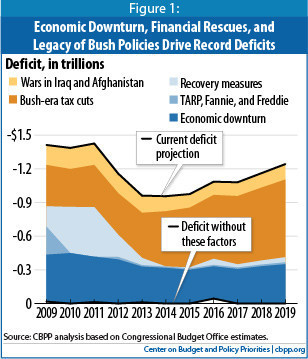 It's almost as if these Biden talks aren't particularly serious! Not to worry, it's getting journalism at the exact same level of seriousness. Consider this section -- my favorite -- from Montgomery's story:

Overall, Third Way calculates that federal taxpayers are far more generous to their employees than private-sector companies, contributing 12.7 percent of payroll to retirement accounts vs. 5.3 percent in the private sector.

"Everyone should have a decent retirement system, but the match there is out of line," said Jim Kessler, a Third Way co-founder who said he has been interested in the issue since his days as an aide to Sen. Charles E. Schumer (D-N.Y.).

"A tiny amount was taken out of my paycheck. And when I left, I kept wondering how the amount I put in could" generate such handsome benefits, he said.

Hilarious. Third Way will tell you, anytime you want to ask, that while "everyone should have a decent retirement system," the one that federal employees receive is "far too generous." And the guy who will tell you that is someone who admits to being entirely clueless as to how the federal employees' retirement system works, despite being one of its beneficiaries. Yeah! Let's get that moron's quote, and call him an expert, by all means!

Is there any way to get the media out of this rut? Not likely! As focus shifts to the 2012 campaign, the press will fall back on their standard practice of playing up the decided-upon issue narrative and then giving copious portions of the news cycle to whatever shiny pseudo-events occur along the way. And unemployment is well on it's way to being pushed off the page -- let's recall that in the first of what promises to be maybe one thousand presidential debates, "joblessness was only tangentially connected to a few questions about tax policy, organized labor and the national debt."