WASHINGTON — The average American household is earning less than when the Great Recession ended four years ago, according to a report released Wednesday.

U.S. median household income, once adjusted for inflation, has fallen 4.4 percent in that time, according to the report from Sentier Research. The report is based on an analysis of Census Bureau data.

The report says nearly every group is worse off than four years ago, except for those 65 to 74. Some groups have experienced larger-than-average declines, including blacks, young and upper-middle-aged people and the unemployed.

Below is a chart from Sentier Research showing median household income (in red) and the monthly unemployment rate (in grey) from January 2000 to June 2013: 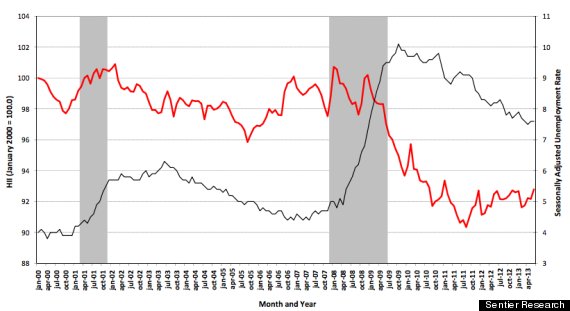