NEW YORK -- Advances in 3-D printing and medical technology will soon make it possible to construct human tissue in a lab, implant it in a patient and watch it grow into the body. Tissue engineering, as it's called, was just one of the exciting new technological advances researchers and doctors have made in the medical 3-D printing field, a potentially revolutionary industry that was on full display during the Inside 3-D Printing Conference and Expo in New York last week. Medical 3-D printing, begun with such well-known devices as hearing aids and Invisalign braces, has come a long way. Now we have 3-D-printed implants, 3-D-printed models for surgical practice, 3-D-printed bone replacements, even 3-D-printed human tissue. In 2013, surgeons at the University of Michigan saved the life of a 3-month-old boy who had been born with severely weak tissue in his airway. They designed, 3-D-printed and surgically implanted a scaffold-like tube to hold his airway open. After three years, as the baby's airway tissue grows over and around the tube, the scaffold will dissolve harmlessly. That operation made it clear what is becoming possible in this field: saving and improving human lives using personalized medical devices printed by a machine. It was the first time a 3-D-printed medical device had saved a child's life.

Dr. Scott Hollister, one of the surgeons at the University of Michigan who is pioneering 3-D printing in medicine, said that at present, tissue engineering is primarily used in reconstructing severely damaged bone and tissue structures. In an interview with The WorldPost, he described one case in Germany in which a man's badly damaged jaw and face were scanned, and then a replica printed in medical-grade titanium. Doctors implanted the replica in his back muscle so that the tissue and bone could start to grow, then removed it a month and a half later and placed it where it belonged on his face.

The jaw implant eventually failed, but Dr. Hollister remains hopeful that this kind of thing will start working after further research and testing. Earlier this year, Israeli doctors successfully 3-D-printed and implanted a replacement jaw for a Syrian man whose face was nearly destroyed in the civil war. Three other patients -- survivors of oral cancer -- will soon undergo a similar procedure. 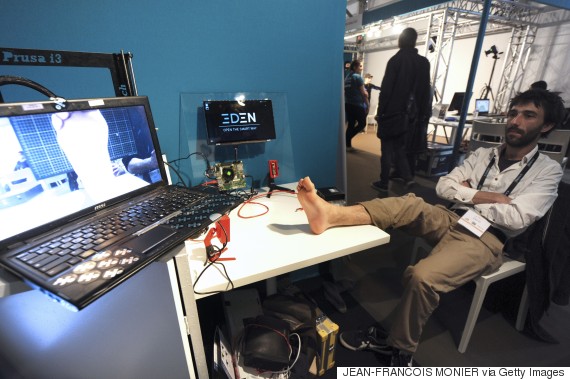 The arch of a man's foot is scanned with a photogrammetric software. The file will be used to make a corrective insole using a 3D printer. (JEAN-FRANCOIS MONIER/AFP/Getty Images). Nin Desai, the CEO of NIN Ventures, a "next generation technology venture capital fund," said her firm is one of the first to make a big push into medical 3-D printing technology.

"The biggest five sectors in the medical space are bracing, hip and knee replacements, hearing aids [and] dental and tissue engineering," she told The WorldPost. "The most underrated sector currently is tissue engineering. It's the newest."

For now, most researchers and surgeons are focused on what's achievable in the near term. Jon Schull, who spoke at the conference on Thursday afternoon, founded a nonprofit called e-NABLE that provides young children who -- through birth defects or injury -- need a new hand. Young children don't usually qualify for upper limb prosthetics -- they simply outgrow them too quickly.

Here is one of e-NABLE's videos of young children getting new hands:

The genius of e-NABLE is its simplicity. For free, the nonprofit provides a 3-D-printed, basic plastic robotic hand that can make a fist, hold a ball and grasp a bike handle to children all over the world. He reckons e-NABLE has shipped out 1,000 hands.

"We are in the middle of approximately a dozen emerging trends," Schull said during his speech. "Everything from, obviously, 3-D printing, to the open source movement, the gift economy and transhumanism -- the notion that we are entering an era in which we are all remaking ourselves for the better using emerging technologies that are science fiction-like and also available, increasingly. And in the center of it is this cosmic sweet spot of smiling children with newly empowered hands and makers who will testify that being part of this is one of the most rewarding and interesting things they've ever done in their lives."

The hands are not advanced prosthetics; they're easily and cheaply printed and assembled. But the kids who wear them don't seem to want something advanced. All they care about is feeling like a normal kid. Plus the hands come in dozens of colors and styles that mimic superheroes like Iron Man and Wolverine. It's a huge confidence boost, parents have told Schull. Their kids feel normal again, can play again, smile again.

"This is what technology is for," Schull said. "Many of us are attracted to it because it's cool. But what turns out to be cool and incredibly meaningful is using it to enable a new kind of future." 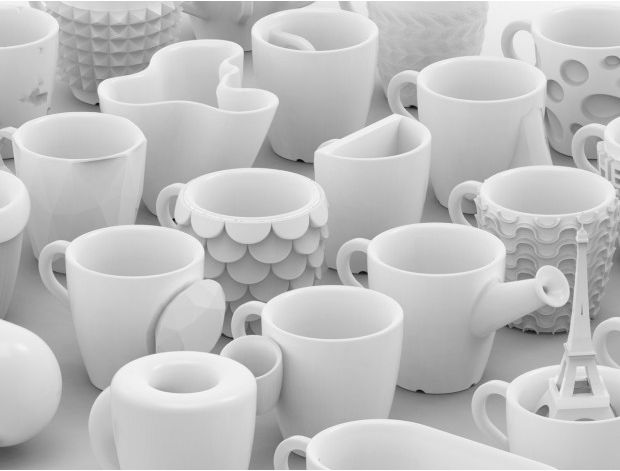