More than 1 in 5 Americans under age 65 had problems paying medical bills in 2011, and the burden disproportionately fell on the poor, the uninsured and those on government health care programs, according to survey findings released by the Centers for Disease Control and Prevention Tuesday.

Overall, 20 percent of Americans, or 54.2 million, surveyed during the first six months of last year said their families had difficulty paying for health care services including physician visits, hospital procedures and medications within the prior 12 months. This represents a slight decline from two previous CDC surveys in 2011. The agency surveyed families, including more than 155,000 people, between January and June 2012. 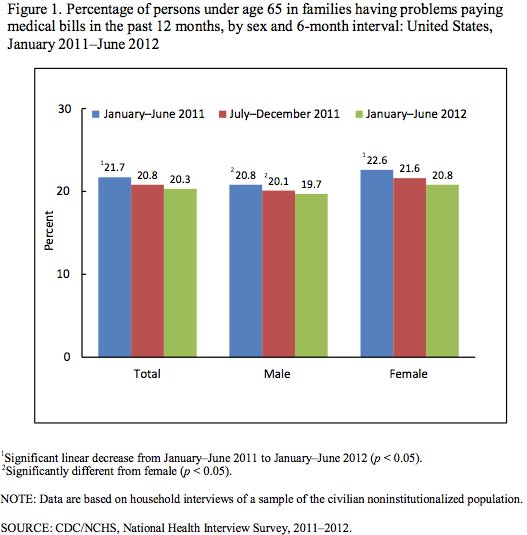 Health care costs in the U.S. typically are higher than in other developed nations, and about 50 million Americans have no health insurance to protect them against crushing medical bills. Even among those with government and private health care coverage, high expenses proved burdensome to significant portions, the survey reveals. Those with low incomes were most likely to report problems with medical bills.

Among American families with no health insurance, 36 percent told the CDC they struggled to pay medical bills during the previous 12 months, a slight but insignificant increase compared to the two earlier polls, according to the report. More than one-quarter of families enrolled in government programs including Medicaid, the Children's Health Insurance Program and Medicare said they had problems with medical bills, compared to 14 percent of people covered by private health insurance. 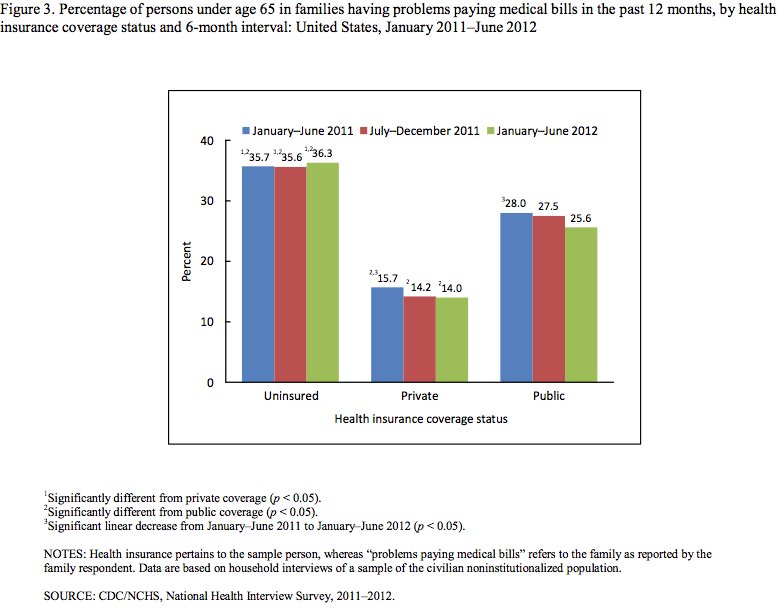 The proportion of families struggling with health care bills also is closely associated with income, the CDC survey shows. Thirty percent of families that earn less than the federal poverty level, which was $22,350 in 2011 for a family of four, reported a problem with medical bills, as did 34 percent of those with incomes ranging from poverty to twice that amount. Fourteen percent of families that make more than two times the poverty level said they struggled with health care bills. 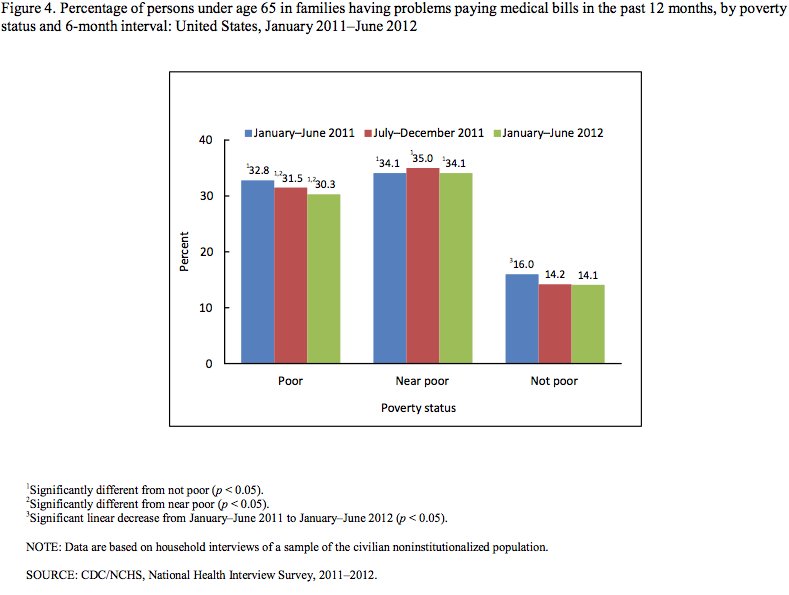 Previous studies have shown that high medical costs discourage people from seeking treatment for their ailments, which worsens their health over time, and that access to health care services has deteriorated since 2000. Research also has established that Americans are less healthy than citizens of other rich nations, despite paying higher prices for the same services.

President Barack Obama's health care reform law seeks to address some of the conditions that lead to burdensome medical bills. The Congressional Budget Office projects the law will reduce the number of uninsured people by 27 million between next year and 2023. Obamacare allows states to expand Medicaid to cover anyone who earns up to 133 percent of the poverty threshold, which is $15,282 for a single person this year, and provides tax credits to subsidize private health insurance for people who earn between poverty and four times that amount, or $45,960 for an individual in 2013.