The official platform of the Republican Party, adopted at its convention in Tampa in 2012, provides important insights into the 2016 elections. The platform makes several medical claims that shape its policies. Since public health policy should be based on the best scientific and medical evidence, fact-checking these claims is timely. When judged by published evidence, are these Republican claims the truth (evidence, knowledge, logic, and facts) or truthiness? Coined by Stephen Colbert, "truthiness" reflects opinions that stem from the heart rather than from reality.

ABORTION
Claim (page 33): "Numerous studies have shown that abortion endangers the health and well-being of women, and we stand firmly against it."

Within two years of Roe v. Wade, the Institute of Medicine had documented that abortion improved women's health. This was soon confirmed by the Centers for Disease Control and Prevention, American Medical Association, World Health Organization, and American College of Obstetricians and Gynecologists.

Claim (page 36):" It is effective, science-based, and empowers teens to achieve optimal health outcomes and avoid risks of sexual activity."

Fact: Abstinence-only educational programs for teens are expensive and ineffective. This was the conclusion of a 2002 systematic review of the world's randomized controlled trials on the topic. The review found that,

Primary prevention strategies evaluated to date do not delay the initiation of sexual intercourse, improve use of birth control among young men and women, or reduce the number of pregnancies in young women.


This finding from the medical literature was confirmed in 2007 by a federally mandated study by Mathematica Policy Research; it followed more than 2,000 students in four promising programs for four to six years. The programs had no benefit. During the last Republican administration, the federal government wasted more than $170 million per year on these ineffective, ideological programs. The position paper of the Society for Adolescent Medicine reports that,

Claim (page 14): "...we take comfort in the tremendous increase in adoptions that has followed Republican legislative initiatives."

Fact: Adoptions have declined dramatically in recent decades, during and after Republican administrations. According to federal data, before 1973 the proportion of babies given up for adoption was about 9% for never-married women under age 45 years. More recently, the proportion has hovered around 1% to 2%. 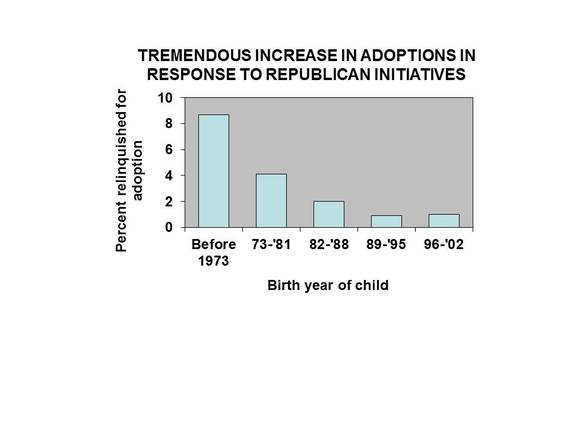 Zero for three thus far. Finally, a bonus question for which the answer was predictable (though not yet documented) at the time of the 2012 Republican convention:

Claim (page 32): "Obamacare--was never really about healthcare,
though its impact upon the nation's health is disastrous [emphasis mine]. "

Fact: Recent fact-checking by the Washington Post confirmed government estimates that Obamacare has helped to save the lives of about 50,000 Americans. This was predictable, since an estimated 18,000 to 45,000 persons die each year from lack of insurance. The number of lives saved by Obamacare is nearing the number of U.S. lives lost in the Vietnam War. Moreover, the program is costing less than expected.

Assessment: Truthiness (and hubris) once again

Truthiness
In this simple medical fact-checking exercise, the Republican Party was wildly wrong on three important public health issues: abortion, abstinence-only sex education, and adoption. The correct answers had been published and widely known in medical circles a decade or more before the 2012 GOP convention in Tampa.

Why the failure?
Two explanations come to mind. The GOP may not have bothered to search for the medical evidence. The Party may have relied on intuition (truthiness) rather than truth. Alternatively, the GOP may have been aware of the facts but intended to mislead the public. Neither explanation should give voters much comfort as the 2016 election approaches.