Years ago -- freshman year of college, to be exact -- I had shoulder surgery. The recovery process was long, tedious and, at times, painful. After nearly six months of daily physical therapy, I was back in business.

At about the same time, Lucas, one of my wrestling teammates, was recovering from a similar injury. The difference? He was back on the mat with full strength in just three months.

When he recovered so much faster than me, I was a little bitter. Why couldn't my body rebound the way his did? What was so special about his shoulder? According to some preliminary but mind-blowing research out of Ohio University, it could have had a lot to do with a difference in our mindsets.

If you ever have to recover from a physical injury -- or even if you want to keep your strength while sitting at a desk job all day -- there might be something in this for you. 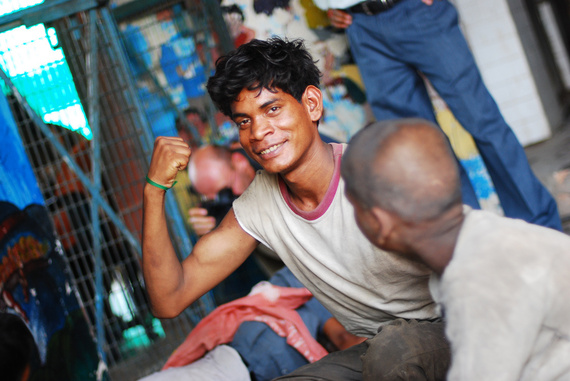 Imagine two people the same age and health with the same injury are put in a cast for four weeks. When the casts are removed, one patient has lost almost 50 percent of her initial strength (that's what happens when your body is immobilized). The other patient, though, has retained 50 percent more strength than the first.

What could explain the difference? The answer could be your mind. Specifically, thinking about using your muscles even when you're physically restrained from doing so.

That's exactly the test medical researchers at the Ohio Musculoskeletal and Neurological Institute (OMNI) ran, and those are exactly the results the found. The experimental group in their test was led through a rehab exercise each day where participants were asked to imagine themselves using their immobilized muscles for an intense task. [1]

Four weeks later, that pretend task proved incredibly effective at helping the participants retain their strength... even though they never actually used their muscles. It demonstrated the importance of the neurological pathways between your mind and your body for building strength; it's not just about muscle tissue.

Back to my friend, Luke, and our shoulder injuries. What does this have to do with the research above? Maybe nothing, but I can't help but remember one important difference between the two of us as we worked to fix ourselves. Luke was a dedicated athlete. He loved his sport, and he was anxious to get back on the mat. I can only imagine the time he spent thinking about his performance -- picturing himself in a match and using his shoulder over and over.

I, however, had a different attitude. I wasn't enjoying my time as a college athlete like I thought I would, I was flirting with the idea of leaving the team, and most of my time was spent day dreaming about playing guitar and other less strenuous things.

In theory, Luke was regularly using his mind to strengthen the neurological pathways between his brain and his muscles. That allowed him to recover from his injury faster.

Is this research and my experience connected? To say so would be quite the stretch for a non-medically trained blogger on the Internet, but it does line up with the findings.

Never mind that; what's important is understanding just how critical your mind can be in fixing your body and maintaining strength. If you're hurt and you want to get better faster, imaging yourself using that body part to its full ability could help. That's an incredible discovery for science.

If you sit at a desk all day -- like I often do -- this could be a stop-gap measure to keep your body from regressing too far when the work schedule gets out of hand. But even if it isn't, imagining myself out being active encourages me to actually get out and be active. Your body does what your mind tells it to, after all. And is there any harm in picturing yourself running through the forest after 10 hours in a cubicle?