Can the government impose medical treatment upon you by brute force, when you're mentally competent to refuse it?

Of course not, you're surely thinking. And you're right. Unless you're suffering from a severe mental illness that makes you an immediate danger to yourself or others, you have the right to say "no," even if you might die from doing so.

This isn't a close question. American law has affirmed this right for decades. Medical ethics around the world insists on it.

Yet for nearly a decade, the Pentagon has violated this right at Guantanamo Bay, by strapping detainees down, then dripping liquid food into their stomachs through forcibly-inserted nasogastric tubes. It's done so to defeat hunger strikes by scores of detainees, who've seized upon this desperate measure to protest their unending confinement.

"Even if intended to benefit," the Declaration of Malta holds, "feeding accompanied by threats, coercion, force or use of physical restraints is a form of inhuman and degrading treatment." "Inhuman and degrading treatment," in turn, violates multiple international treaties to which the U.S. is a party, including the Convention against Torture and the International Covenant on Civil and Political Rights.

Yet both the Bush and Obama Administrations have continued to force-feed Guantanamo's hunger strikers without consequence. A 2006 federal statute stripped the courts of jurisdiction over the "treatment" and "conditions of confinement" of Guantanamo detainees "determined by the United States to have been properly detained as ... enemy combatant(s)." Federal courts have held that this law denies them recourse to the courts to stop force-feeding. 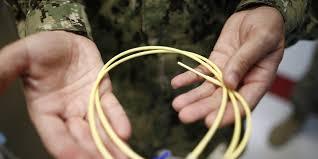 To their credit, some medical personnel have, in years past, declined on ethical grounds to force-feed Guantanamo's hunger strikers, a fact that's gone unreported until now.

Nine years ago, I spoke on the ethics of armed forces physicians' dual loyalties - to their patients and to the military mission - at the annual meeting of U.S. Navy internists. (The Navy staffs medical facilities for detainees at Guantanamo.) I was told afterwards by a few attendees who'd served at Guantanamo that some physicians had quietly objected to force-feeding and been allowed to opt out. The Navy, these attendees said, reached out to reservists for volunteers willing to take their place.

More recent accounts indicate that this informal accommodation remained in place for years, though there've been no other reports of medical personnel making use of it.

Army Brig. Gen. (Rtd.) Stephen Xenakis, a physician and frequent critic of medical conduct at Guantanamo, reported last summer that Pentagon officials "have said to us directly that if a provider objects for ethical reasons or other reasons they would not be ordered to participate -- and they would not suffer any adverse consequences."

This informal practice not only permitted health professionals to say "no" without subjecting themselves to disciplinary charges; it kept their qualms below the waterline, saving the Pentagon from the unwanted public spectacle of an ethics challenge from within.

When this accommodation policy came to an end isn't known, but a Guantanamo nurse who refused last spring to participate in forced tube-feedings now faces a Board of Inquiry and possible expulsion from the Navy, with loss of pension and other benefits.

He's poised to become the kind of hero the Pentagon doesn't want. Writing in the New England Journal of Medicine last year, three prominent medical ethicists urged health professionals at Guantanamo to refuse to participate in force-feeding. The American Nurses Association took a more compromising line, urging Secretary of Defense Chuck Hagel in a letter last month to allow nurses to make their own ethical decisions on force-feeding without adverse career consequence.

Even the usually conservative American Medical Association, ebbing in influence (less than a third of U.S. physicians now belong) but still a voice to be reckoned with, has weighed in, warning Hagel in April 2013 that "the forced feeding of detainees violates core ethical values of the medical profession." And several weeks ago, when the U.S. made a regularly-scheduled report to the U.N. Committee against Torture, panel members posed hostile questions about force-feeding at Guantanamo.

The U.S. response to these challenges has been well-calculated to deflect passing media attention but preposterously at odds with professional ethics and the law. "It is the policy of the United States to support the preservation of life, by appropriate clinical means," an American representative told the Committee against Torture, reprising the Pentagon's mantra since the first reports of force-feeding at Guantanamo emerged.

Both the Bush and Obama Administrations have pushed the analogy to preventing suicide. But medical ethics and health care law have long been clear about the distinction between stopping suicidal acts and imposing life-sustaining treatment by force.

The former is permissible, indeed obligatory in clinical settings. The latter, when a man or woman of sound mind says no to treatment, is a grave breach of medical ethics - and a battery as a matter of law. When done to detained enemy combatants, it's also a breach of the laws of war.

So as a legal argument, the suicide analogy is unserious. Its real purpose is political: to diminish the moral power of hunger-striking as protest by medicalizing it.

As a moral statement, a hunger strike is two things: (1) a defiant assertion of freedom in the face of authorities with seemingly-total control, and (2) an affirmation of resolve, to the point of willingness to endure suffering and personal risk. The suicide analogy makes this moral statement into a clinical syndrome, unworthy of respect as a personal choice.

Treating hunger strikers as suicidal patients bears uncomfortable resemblance to Soviet psychiatry's diagnosis of dissidents as mentally ill. Both delegitimize protest by recasting it as disease.

From the Pentagon's perspective, the impulse to do so is understandable. Guantanamo's hunger-strikers pose a Hobson's choice, between permitting their powerful statement about the cruelty of unending confinement and quashing this message with five-point restraints and gastric tubing.

As President Obama has acknowledged, the only decent out is to close Guantanamo (which Congress won't allow). In its stead, the Administration chose secrecy. Within the past year, the Pentagon put an end to public disclosure of the daily number of hunger-strikers, rebranded force-feeding as "medical management of detainees with weight loss" (& hunger strikes as "non-religious fasting"), and refused to release any of its hundreds of videos of force-feeding.

But the secrecy strategy is collapsing.

This year, a district court judge in Washington, D.C. allowed a Guantanamo detainee, Abu Wa'el Dhiab, to invoke the constitutional right of habeas corpus to object to some of the conditions of his force-feeding. The judge turned back Dhiab's challenge, but during the course of the litigation it emerged that the Department of Defense had made videos of Dhiab's and other detainees' force-feedings.

At the request of news organizations, the court ordered the recordings' release, which could come as early as this month. The videos are reportedly quite disturbing. There's no small chance that they'll stir global ire.

Meanwhile, the Navy nurse who faces a Board of Inquiry for refusing to force-feed hunger-strikers (including Dhiab) is attracting much media interest. On the advice of his attorney, Ron Meister, he's remained anonymous so far, hoping, Meister told me, to save his military career. But if the Navy punishes Meister's client for doing his ethical duty, he'll likely become an icon of courage for taking a stand against commanders who've lost their moral moorings.

On November 20, the U.N. Committee against Torture told the U.S. "to take immediate and effective measures to ... [p]ut an end to force-feeding of detainees in hunger strike as long as they are able to take informed decisions."

To some in this country, international law may be an afterthought. But the U.N. Committee's unheeded directive is a warning about the damage being done to America's image and interests by our insistence on a degrading practice that's at odds with transnational medical ethics and legal consensus.

Force-feeding started at Guantanamo in response to fear that self-starving captives would stir anti-American ire. It would be ironic were this response itself to rouse worldwide outrage, making allies less likely to collaborate with us and stiffening our enemies' resolve.

I write regularly on subjects at the interface between law, culture, politics and your health. Follow me on Twitter: @greggbloche