Traditional, or Original, Medicare turns 50 on July 30, having had many challenges and achievements from the days of its passage to today. It is time to celebrate its many successes, note some of its current challenges and threats to its future, and briefly discuss how it gives us a strong foundation upon which to build still-needed health care reform.

When it was enacted in 1965, about one-half of seniors in the U.S. lacked health insurance, and many could not afford necessary health care. When it was passed with strong bipartisan support (313-116 in the House, and 70-24 in the Senate), 20 million Americans age 65 and older gained health insurance. (1)

From the start, Medicare was a political football raising strong arguments for and against any kind of universal health insurance, quite similar to those we hear today, including from the American Medical Association, hospitals, and the health insurance industry. But a "corporate compromise" was struck in 1965 whereby private insurers were relieved of their worse health risks, hospitals could expect assured payments for their costs of serving a previously disadvantaged population, and physicians gained a permissive "usual, customary, and reasonable" reimbursement policy. (2) Claims processing and bill auditing were contracted out by the government to private fiscal intermediaries, especially Blue Cross and Blue Shield plans. (3)

From the beginning, Medicare has provided a broad set of benefits, defined by law, protecting all seniors, many of whom could not afford health insurance in the private market. Part A provides hospital insurance, while Part B provides supplementary medical insurance for 80 percent of physician services (initially with a $50 deductible and 20 percent coinsurance), X-ray and laboratory tests, and some home health and outpatient and mental health services. Some additional benefits were added in later years to this basic program, including coverage for the disabled and patients with end-stage renal disease in 1972 and partial coverage for prescription drugs in 2003 (Part D). Medicare's benefits have always been considered an earned right, not an entitlement, since all beneficiaries pay into the program through mandatory contributions from individuals and/or employers. (4)

Today, Medicare is a very large program, covering more than 55 million Americans, including all seniors and 9 million people with permanent disabilities under age 65. It accounted for 14 percent of the federal budget in 2014 and about 20 percent of total personal health expenditures in 2013. (5) Since the 1990s, we have seen an increasing trend toward privatized Medicare plans (Part C), starting with Medicare + Choice HMOs in the 1990s and their sequel, Medicare Advantage (MA) since 2003. These plans have been promoted by conservative policymakers and think tanks with a goal to replace Medicare as an "entitlement program" with private market plans, health savings accounts and vouchers. Almost one-third of seniors are now enrolled in MA plans.

The Many Strengths of Traditional Medicare over 50 Years

Traditional Medicare has performed much better over the years than any of these private plans, which operate with the goal of profits more than service. Table 1 summarizes the major differences between traditional Medicare and privatized plans. (6) 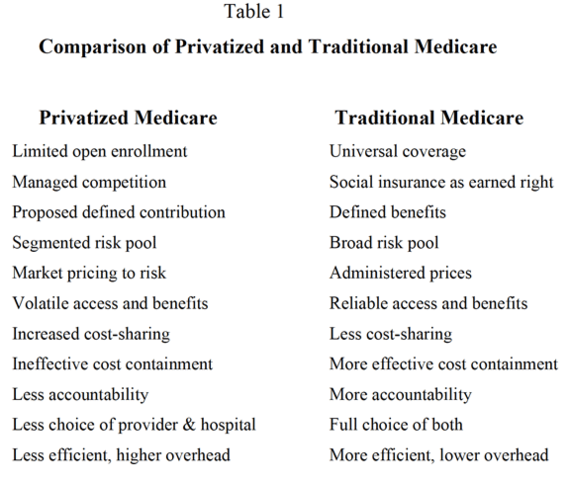 These comparisons are supported by many studies over the years. As just four examples:

Some Major Challenges Facing Medicare Today
As in 1965, Medicare remains a lightning rod for intense political debates over its future. Despite its proven track record for efficiency, reliability, and responsible service over these last 50 years and widespread public support, Republicans are united in their attempts to dismember it, convert it to a voucher program, and shift patients to the private marketplace, all under the guise of reining in federal spending and austerity. Some Democrats are amenable to raising the eligibility age for Medicare and increasing cost sharing. These ideas are a complete disconnect with the needs of our aging society in a time of increasing inequality of incomes. More than 25 million seniors and people with disabilities live on annual incomes of $23,500 or less, many of whom cannot afford premiums and cost-sharing in either traditional or privatized Medicare. And as our population ages, pensions that in the past assured defined benefits are shifting to defined benefit pensions, without such assurances. (11) There are still many gaps in coverage, even within traditional Medicare, including for long-term care and dental care.

Future funding for Medicare is seriously threatened and murky at best. The Obama administration has told us that the Affordable Care Act (ACA) will be financed in part by $716 billion in Medicare cuts over 10 years, with the unbelievable claim that these cuts will not result in reduction of services. The recently passed H. R. 2, the "doc fix" bill, has provisions in it that will require new deductibles in first-dollar supplemental Medigap plans (held by 40 percent of Medicare beneficiaries) and expand means-testing for Medicare Part D, both of which will increase costs for seniors and further undermine traditional Medicare.

Just as the future of Medicare is unclear, so is that of our entire health care system. The U. S. Supreme Court is expected to rule in coming days on the legality of subsidies under the ACA. A negative ruling will be a serious blow to the ACA and call into question where we should go next. Republicans in Congress will push for repeal or defunding parts of the ACA. As the debate heats up, the leading alternatives will likely be: (1) continuation of the ACA as it unravels, (2) some GOP "plan" based on patients having "more skin in the game" that further threatens access and affordability of care; (3) revival of the "public option" idea, hardly an effective fix as merely adding one more payer to our dysfunctional multi-payer financing system; and (4) long-overdue consideration of single-payer national health insurance that would cover all Americans in a large risk pool with more benefits, less cost, more reliability and equity in a sustainable way, as described in my recent book, How Obamacare Is Unsustainable: Why We Need a Single-Payer Solution for All Americans. (11)

Traditional Medicare has proven its superiority over any private, market-based alternatives for the last 50 years. It is time to build on this social insurance model as the health care debate continues.

Cubanski, J. A primer on Medicare: Key facts about the Medicare program and the people it covers. Kaiser Family Foundation, March 20, 2015.

Gold, J, Casillas, G. What do we know about health care access and quality in the Medicare Advantage versus the traditional Medicare program? Kaiser Family Foundation, November 6, 2014.

Herman, B. Medicare is doing more to police Advantage and Part D lapses, but does it matter? Modern Healthcare, December 4, 2014.

Geyman, JP. How Obamacare Is Unsustainable: Why We Need a Single-Payer Solution for All Americans. Friday Harbor, WA. Copernicus Healthcare, 2015.