It Disrupted Jim Crow, but Otherwise the Transition Was Smooth

Hillary Clinton and others charge that Bernie Sanders' Medicare-for-All plan would disrupt and threaten Americans' health care. But the smooth rollout of Medicare-for-Seniors in 1965 -- which many had also predicted would bring chaos -- belies that charge.

To accomplish this feat (largely without computers) the Social Security Administration mailed an information leaflet and sign-up cards preprinted with each individual's name and Social Security number (see example below) to seniors on the Social Security and railroad retirement rolls, as well as Civil Service annuitants and a million other seniors identified through IRS records. 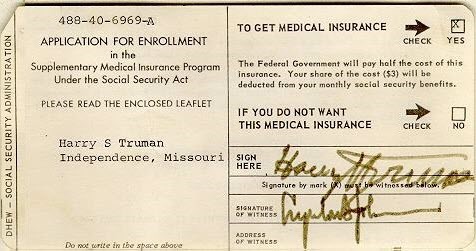 All told, Medicare's overhead costs for the first year totaled only $120 million (equivalent to $882 million in 2015). By comparison, setting up the insurance exchanges for private coverage under Obamacare cost more than $6 billion -- about seven times as much. But even the modest figure for Medicare's start-up costs is an overstatement since it includes the cost of processing six months' worth of medical bills, not just the enrollment costs. Moreover, Medicare and Medicaid (which was passed at the same time) displaced several smaller federal health assistance programs, saving about $383 million (in 2015 dollars) on their overhead costs.

Even as it became clear that Medicare enrollment was proceeding smoothly, many saw disruption ahead. The Association of American Physicians and Surgeons (AAPS), a group to the right of the American Medical Association (AMA), threatened that 50,000 doctors would boycott Medicare. (Today, the AAPS is sounding the alarm that Medicare-for-All would take away "what remains of your doctor's liberty.") Wall Street Journal headlines warned that "Most MDs Won't Cooperate," and foresaw a "Patient Pileup," as "flocks of Medicare beneficiaries ... suddenly clog the nation's 7,200 hospitals."

None of this came to pass. Doctors continued to care for elderly patients, mostly accepted Medicare payment, and soon came to rely on Medicare as an economic pillar of their practices. Even the AMA, which had spent millions fighting Medicare's passage (including an infamous ad campaign featuring then-actor Ronald Reagan) cooperated in the program's implementation. Hospitals ran smoothly, with only a handful reporting more than minor of problems.

But Medicare did cause a major disruption, it disrupted Jim Crow hospital care.

The 1964 Civil Rights Act banned racial discrimination in facilities receiving federal funds (which included most hospitals), but enforcement was lax until Medicare. Many hospitals, particularly in the South, still refused to care for black patients at all, while others relegated them to separate entrances and shabby basement wards. Black physicians were often barred from hospital staffs, and in many locales ambulance services were separate, and distinctly unequal.

With Medicare on the horizon, federal officials made it clear to hospitals that segregated hospitals would be excluded from the program. In the spring of 1966, three months before Medicare took effect, 51 percent of American hospitals were still segregated. By August of that year, 99.5 percent had desegregated.

Medicare-for-All would give all Americans complete and equal coverage, completing the disruption of hospital segregation that Medicare began a half century ago.

Aside from that welcome disruption, Medicare-for-All would greatly simplify life for hospitals and doctors. Instead of the laborious and expensive task of billing patients and their insurers for each Band-Aid and aspirin tablet, hospitals would receive a lump-sum budget, much as we pay for a fire station. Doctors would bill one plan, using one billing form instead of the dozens of complex billing schemes -- each with its own rules and redundant documentation requirements -- that we face today.

Most important, Medicare-for-All would end many of the disruptions that our patchwork coverage system currently inflicts on patients. All Americans would, for the first time enjoy a free choice of doctor and hospital, and would never again be forced to change doctors merely because their insurance changed, or their doctor was dumped from their insurer's network. And patients' lives would no longer be disrupted by financial ruin from medical bills.

Drs. Steffie Woolhandler and David U. Himmelstein, professors of health policy and management at the City University of New York School of Public Health at Hunter College and Lecturers in Medicine at Harvard Medical School, co-founded Physicians for a National Health Program, a nonpartisan organization. The opinions expressed do not necessarily reflect those organizations'.